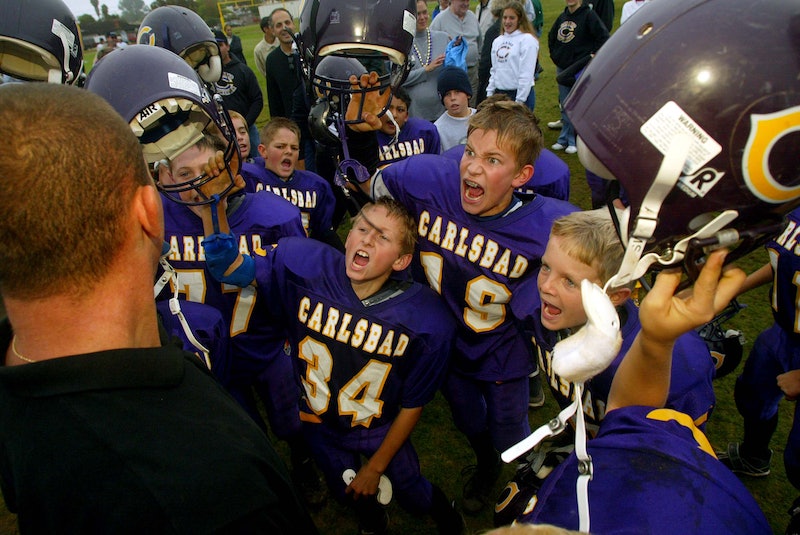 I got excited when I saw The Breakfast Club was going to be on TV this morning. A historic 30 years (and 10 days) after they first had that fateful detention, I'd get to watch the misadventures of the brain, the athlete, the princess, the basket case, and the criminal once again. Except that The Breakfast Club on Revolt isn't that Breakfast Club, it's this Breakfast Club , a daily New York City radio show broadcast. I'm sure it's an enjoyable program, it just wasn't what I was looking for. I wish I could say this was the first time I was fooled by my TV listings, but alas, it's not.

While The Breakfast Club is a pretty straight-forward fake-out, I've noticed another trend with shows to take the first word or two of the show you know and love and lob another word on. Breaking...Amish. Game of...Arms. Friday Night ... Tykes . "Oh, hell yes, Party Down is on! Oh, wait, no. Dammit. Party Down South. Totally different thing."

Whether this name game is intentional (ding ding ding!) or purely accidental (unlikely), we're here to help you tell the difference between the real deal and their knock-off namesakes.

What Party Down is About: A biting comedy about a group of struggling actors/cater waiters in Los Angeles work various hilarious events, while dealing with their personal and professional misfires. All while wearing humiliating pink bow ties.

What Party Down South is About: A horror show about a group of twenty and thirty-somethings from South Carolina (soon to be Georgia) who drink, fight, party, and participate in other various soul-crushing reality television standard practices. All while wearing...pretty much nothing.

Similarities: They are both definitely television shows. Party Down's Kyle (Ryan Hansen) looks like he could be on Party Down South, but even he is too intelligent for that crowd. If Party Down's Roman (Martin Starr) found any similarities between his crew and the Party Down South crew, he'd probably lose it for good.

Seasons: Sadly, they are both even at two seasons a piece.

Betrayal Level: 9. Those of us who miss Party Down will find any opportunity to watch it. Party Down South is not an acceptable alternative.

What Breaking Bad is About: A high school chemistry teacher named Walter White (Bryan Cranston) is diagnosed with cancer and decides to make some big changes with the remainder of his days...by becoming a ruthless meth lord with the aid of one of his former students Jesse Pinkman (Aaron Paul). Oh, it's also the greatest TV drama of all-time.

What Breaking Amish is About: A reality show about four young Amish adults and one Mennonite move from their rural communities to the big cities to see how they fare and whether the life beyond the only one they know is the one for them.

Similarities: Both shows are about, uh, getting accustomed to new territories and lifestyles.

Betrayal Level: 4. The entire Breaking Bad saga is available on Netflix and if you haven't seen it all by now, that's not Breaking Amish's fault.

Game of Thrones and Game of Arms

What Game of Thrones is About: Uh...how long have you got? In short: the wildly popular fantasy saga from George R.R. Martin about boobs and dragons and violence and your favorite characters dying in the most horrific ways possible.

What Game of Arms is About: A reality show about competitive arm wrestlers in America. Really.

Similarities: Arm wrestling can get...kind of violent. Not chop of someone's head when you don't like when they won violent, but you know.

Seasons: Game of Thrones kicks off its fourth season on Sunday, April 6, while Season 1 of Game of Arms wraps up on Tuesday, April 15.

Betrayal Level: 5. The wait for Game of Thrones has felt as harsh and long as the winter itself, but hey, at least Game of Arms won't brutally kill off people we like. (I mean, probably not.)

What Friday Night Tykes is About: The kids, parents, and coaches of the Texas Youth Football Association deal with the ups and downs of a sport that isn't just a sport in Texas, it's a way of life. Even for 8-year-olds.

Seasons: Friday Night Lights ran for five perfect seasons, while Friday Night Tykes has been renewed for a second season.

Betrayal Level: 7. Yes, they're both technically about the pressures of Texas football, but anything that tricks us into thinking we might be watching something with Matt Saracen or Tami Taylor and turns out to have neither of those people is the ultimate betrayal.