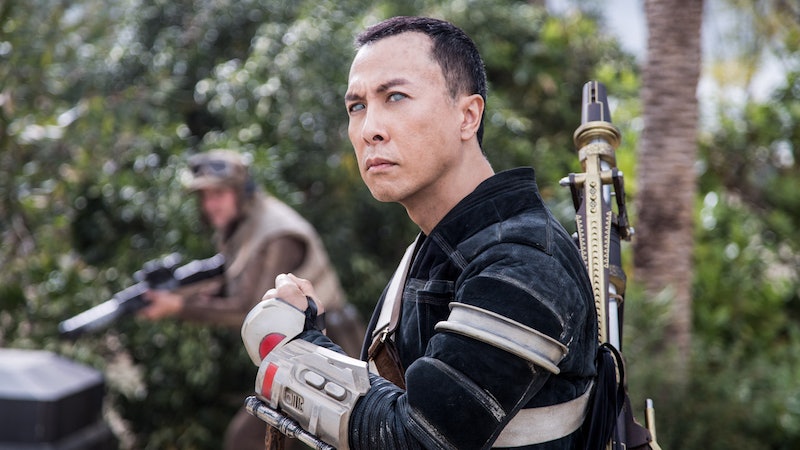 For most of us, the Force is something we will never have, but always wish we did. And, unfortunately for them, the Force remains just as elusive to many characters in the Star Wars universe. This is especially true in Rogue One: A Star Wars Story, which takes place at a time when all remaining Jedi are in hiding and/or believed to be dead. Now, you might be thinking, with the absence of the Jedi in Rogue One, does that mean that there won't be any use of the Force from our heroes at all? Well, to answer that question, we have to answer another one first: can non-Jedis use the Force?

The short answer here is yes, non-Jedis can, and do, use the Force. When Obi-Wan Kenobi first introduces Luke to the Force in Episode IV, he describes the Force as "an energy field created by all living things." The Force, then, is always present, whether Jedi are there or not. However, only Jedis can use the Force as easily and powerfully as they do. Many non-Jedi characters, however, are described as being "Force-sensitive." Princess/General Leia is perhaps a perfect example of a Force-sensitive person who does not become a Jedi. She can use the Force in her own way — she has a strong connection to Luke and Han that help her assess their well-being. Just because she's not a Jedi doesn't mean she can't still tap into the Force like her brother.

There might not be any Jedis in Rogue One (well, maybe not), but there are a few Force-sensitive characters that help the Rebels in their cause. Most notably, there's Chirrut Ïmwe, a blind warrior who has a deep connection to the Force. On the official Star Wars site, Chirrut is described as "deeply spiritual" and a "warrior monk." A strong believer in the Force, which he treats almost like a religion, Chirrut has a peace that guides him, not unlike the Force. That said, his official character bio also explicitly states that "he lacks Force abilities." But that could mean that he just isn't strong enough, or connected enough, to use things like the Force Push in battle, not that he can't use the Force at all.

There have also been rumors that Jyn Erso, the new protagonist introduced in Rogue One, might be Force-sensitive herself. Jyn grew up in close proximity to Kyber crystals, used to make lightsabers, as her father, Galen Erso, studied their power. In a preview scene, a young Jyn is given a crystal necklace by her mother, who tells her to "trust the Force." Jyn is certainly a believer in the Force. Other previously released clips show her speaking about the Force. But, being a believer doesn't necessarily mean she is Force-sensitive. And, even if she is, it's unclear how that sensitivity will manifest.

Force-sensitivity has yet to be strictly defined by the Star Wars series, and it's possible it never will be. For now, the most important thing to note is that one does not have to be a Jedi to be Force-sensitive, which means that non-Jedis are free to use the Force. It's just a matter of figuring out how.