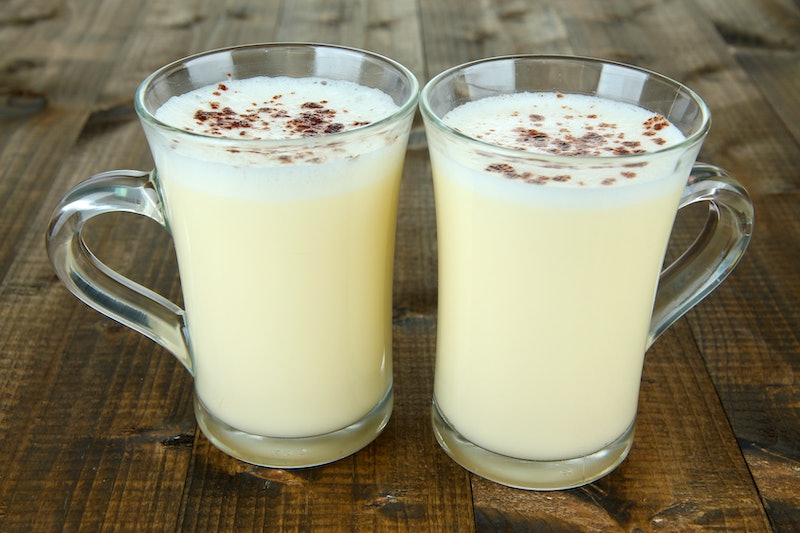 Besides cider and hot cocoa with marshmallows, there's no holiday drink that's more classic than eggnog. I can't be the only one who has a love-hate relationship with this creamy beverage, right? Part of that ambivalence might have something to do with not knowing where eggnog comes from; I just honestly can't figure out who would think that mixing milk, raw eggs, and alcohol together was a good idea.

But after some research, I have an answer: The British. Yep, it turns out that the idea of eggnog seems to originate from a British drink called "posset," which is basically a hot beverage consisting of milk and sherry or ale, plus spices and sugar. (Just the thought makes my stomach do flips. I would much rather have a peach bellini or spiked hot chocolate, thanks). Posset was considered a luxury since wine and milk were all pretty expensive back then. During the 1200s, monks would drink possets with figs and... dun, dun, dun! Eggs, of course.

It's not totally clear when eggnog got its name or why, but around the same time, people in East Anglia would enjoy a type of strong beer called "nog." The word "noggin" referred to the wooden cup you used to drink the nog. When eggnog made its way to the Americas and other regions as well, its popularity only grew. Different variations of eggnog were invented, such as "coquito" — eggnog made with coconut milk — in Puerto Rico or a vanilla-flavored eggnog called "rompope" in Mexico. Different kinds of booze were used: sherry, rum, whiskey, you name it. By the late 1700s, people christened the festive alcoholic drink "eggnog" (or sometimes "egg-nog"). Talk about drunk history.

So how did this rich and creamy drink become associated with the holidays? Again we're not sure since technically milk, eggs, and alcohol are ingredients you could get during any time of the year (if you had the money, of course). What we do know is that eggnog became a popular drink, especially at holiday parties, to toast with and to wish friends stellar health and good fortune.

Today, we've got tons of flavors of eggnog (like pumpkin spice, of course), as well as plenty of vegan alternatives (soy, coconut milk, you name it). Just last week, my colleagues had a mini eggnog tasting party in the office with different types of eggnog. For lots of people, eggnog is the quintessential holiday beverage for cracking Christmas jokes and getting them through the holidays.

Now you can feel free to enjoy your next glass of eggnog with more knowledge about the beverage than you probably ever cared to know. Drink and be merry, friends!