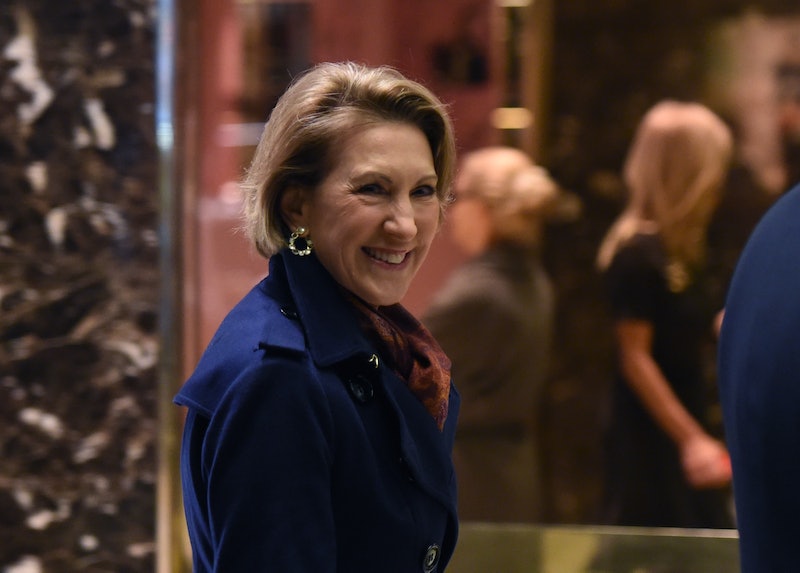 Businessperson turned professional politician Carly Fiorina could become the Director of National Intelligence under Donald Trump's administration. The New York Times reported that the two met on Monday to discuss the position as well as other issues of national security. If chosen for the job, Fiorina would become the first woman to ever hold the job. And while her taking it would certainly be a benchmark in U.S. federal government history, Fiorina's stance on women's rights could be much more progressive.

Like a few other Trump cabinet picks, it's a wonder that Fiorina wants to work with the president-elect at all. Fiorina was one of many targets of the President-elect's wrath during the primary election season. He tweeted last year "that if you listen to Carly Fiorina for more than ten minutes straight, you develop a massive headache" and that the former Hewlett-Packer CEO was "the last thing our country needs." Fiorina seemingly felt similarly about Trump, publicly asking him to "step aside" as the presidential nominee this October.

Monday's meeting, however, suggests the two may have put their differences behind them. Though Fiorina has accomplished much in the way of business and now political success, she is far from a feminist hero.

Trump and Fiorina both have the overturning of Roe v. Wade on their to-do lists. As the New Yorker reported in 2010, when asked during a radio interview about the specifics of her anti-abortion views, Fiorina replied, "I absolutely would vote to overturn Roe v. Wade if the opportunity presented itself." Luckily, she probably won't get that opportunity if she's appointed director of national intelligence.

She Is Against Federally Required Maternity Leave

The U.S. is currently last amongst "developed countries" when it comes to paid maternity leave, and Fiorina wants to keep it that way. While still a Republican presidential hopeful in 2015 she said that it is not the government's place to mandate that employers provide paid maternity leave. Rather, she said, private sector companies would simply "do the right thing" in order to "attract the right talent." Trump, on the other hand, does support required paid maternity leave, though it's unclear exactly who would qualify.

During a 2014 interview with CNN's S.E. Cupp, Fiorina came out against federal efforts to close the national wage gap between men and women, saying that laws to combat gender discrimination are already in place for those who need them. She went further to say "the Paycheck Fairness Act, the Lilly Ledbetter Fair Pay Act — these are tokens. They're gestures. They don't truly help women advance." A year later, Fiorina said unions are partially to blame for women getting paid less than men with the same jobs; she said this despite the fact that the wage gap is reportedly smaller amongst those with union representation than amongst those without.

Fiorina is hardly the women's rights advocate many would like to see in Trump's administration. And while she would not have a direct hand in advising Trump on reproductive rights, maternity leave, or equal pay, she unfortunately will make up what could become an anti-women's rights echo chamber within the Trump administration.