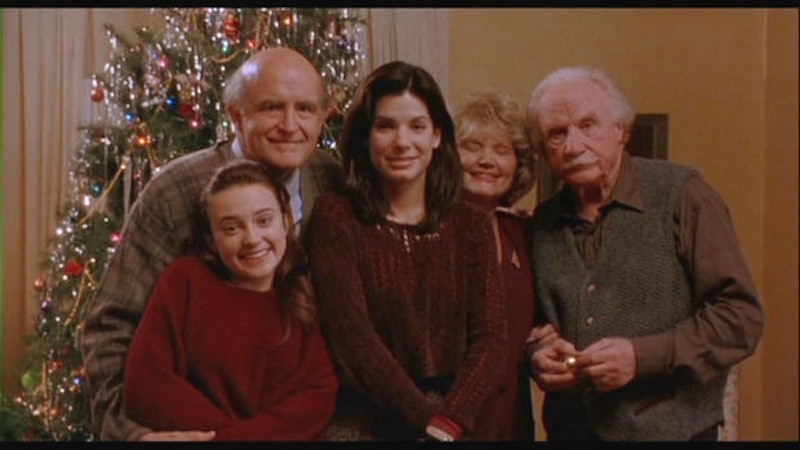 The 1995 Sandra Bullock rom-com While You Were Sleeping is one of those super '90s movies I make it a point to watch every year around Christmas. What's not to love? You've got a totally dreamy Bill Pullman and Peter Gallagher, Bullock at her awkward comedic prime, a plot that makes very little sense but you just kind of roll with it, and a chemistry-filled love story between the two leads. But my favorite part of the film has got to be the outrageous Callahan family. While You Were Sleeping is a Christmas movie and a romantic one all wrapped into one, an idea plenty of other films have attempted to capture, but the wacky supporting players of the Callahan family make this particular more relatable, and more enjoyable, than the rest.

If you haven't seen While You Were Sleeping, here's the basic gist. Bullock plays a lonely Chicago El booth worker named Lucy who pines for Peter Callahan, the handsome, rich guy who comes through her booth every day. When Peter is mugged and pushed onto the tracks, Lucy jumps down to pull him to safety. Once at the hospital, she can't get through to make sure he's OK without being a family member, but a misunderstandings occur and a nurse mistakes her for his fiance. Peter lands in a coma, and once his family arrives, they're told that his fiance saved his life. Lucy doesn't deny this, and despite Peter's family having had no idea he had a fiance (since he actually doesn't), Lucy is embraced by the large and loud group and pulled into their grief, love, and wackiness, right smack in the middle of Christmas.

The film ends up centering on the budding romance between Lucy and comatose Peter's brother Jack, but while the two love birds are flirting up a storm, having their sexually tense arguments, and falling in love with each other, it's from the family shenanigans that While You Were Sleeping gets its comedy. You have Peter's parents, Midge and Ox (Micole Mercurio and the lovable Peter Boyle) who run a company where they, as Ox says, "buy furniture from dead people." Rounding out the gang are Peter's grandmother with a bad heart Elsie, (Glynis Johns, the suffragette mother from Mary Poppins), teenage sister Mary (Monica Keena), and Peter's Jewish godfather Saul (Jack Warden), who figures out Lucy's secret but helps her continue the lie.

Whether they're fighting in church, bickering over the Christmas dinner mashed potatoes, repeating each other, talking over one another, or just losing their minds together while standing over Peter's comatose body, the Callahan's antics give While You Were Sleeping some seriously comedic moments as well as a genuine touch of realness. Most people who have big families and who are close to them can pinpoint exact moments when their moms, dads, siblings, or grandparents do or say the wacky, hilarious, and frustrating things the Callahans do.

Personally, I love the Callahans so much because they remind me of my family. Everyone gets a little butty around the holidays, and while the antics of While You Were Sleeping are, of course, a little exaggerated, the essence of what it means to be family is there throughout the movie. My family bickers, argues, laugh, cries, and is generally goofy and wacky when we all get together, like the Callahans, so watching While You Were Sleeping is like a little reminder of home. Many people might pass over this movie, assuming it's just another romantic comedy, but while Bullock is certainly funny in it, the real laughs come from the wacky family members who might be just like yours.

More like this
22 Movies On Netflix That Are Perfect For The Whole Family
By Bustle Editors
Twitter Is At Odds Over Taylor Swift’s Possible ‘All Too Well’ Oscar Run
By Brad Witter
Revisit 1992’s 'A League Of Their Own Cast' Photos After The New TV Series
By Grace Wehniainen
What Is Ben Affleck's Net Worth? At 50, The Oscar Winner Makes 8 Figures Per Film
By Meg Walters
Get Even More From Bustle — Sign Up For The Newsletter