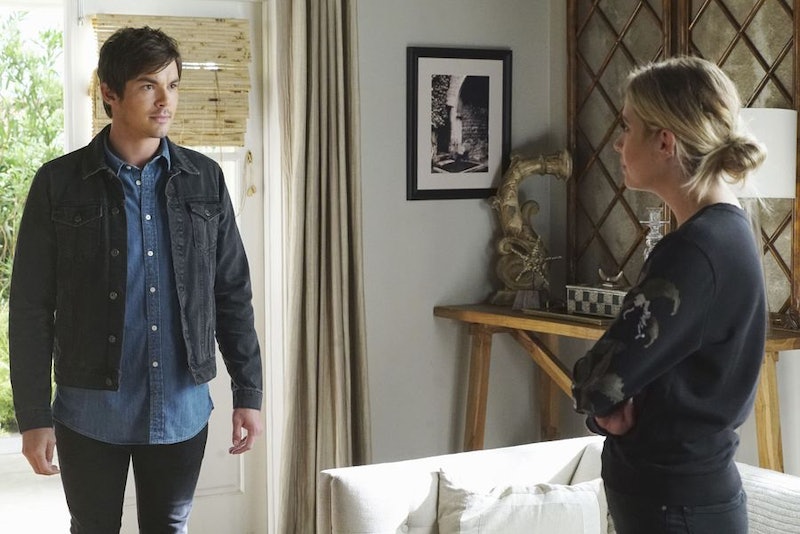 If you were an alien and came down to Earth and your only insight into humanity was television, you would probably assume that women do nothing but fight over boyfriends and try to undermine each other at every turn. Luckily, there are some TV shows that are bucking these assumptions and blocking the frankly annoying stereotypes. In Season 7A, Pretty Little Liars dealt with the very sticky situation of a love triangle between two friends, and they did it without making any party look petty, catty, or insanely jealous. Imagine that. This mature display was one of the best romantic television moments of 2016.

Hanna Marin and Caleb Rivers were in some sort of romance from, oh, the minute he walked on the Rosewood, Pennsylvania scene (we’re going to forget about the time he went to Ravenswood, because everyone else has already forgotten about that show). I mean, can we just revisit the Season 1 scene in which Caleb is living in the Marin house in secret and Hanna has to jump in the shower with him to pretend like she’s showering, because she doesn’t want her mom to know about Caleb? And that look she gives Caleb when she sees his cute butt? I mean, seriously.

Anyway, Caleb and Hanna were the show’s main OTP — there was no problematic teacher-student relationship, neither of them tried to drown the other, and neither ever became a part of the A team. What could go wrong? Well, as it happens, Caleb and Hanna moved to New York together after graduation and ended up breaking up. Hanna was too obsessed with work, and Caleb couldn’t take it anymore. Hanna ended up engaged to Jordan, and it wasn’t until everyone came back to Rosewood for Charlotte’s hearing that Caleb and Hanna saw each other.

By then, the groundwork had been laid for Spencer and Caleb to have a little thing going on. After Caleb and Hanna broke up, he saw Spencer, and the friendship between the two blossomed into something more. Of course, when everyone was back together in Rosewood, it’s not like Caleb and Spencer wanted to hurt Hanna and advertise that they were feelin’ each other. They kiss, they consummate their relationship, and for all intents and purposes, they’re BF and GF.

Spencer does ask Hanna for her permission, and Hanna is like, “Yeah… sure.” It’s not exactly comfortable. But when Hanna is abducted, tortured, and returned, Spencer knows that Caleb is still in love with Hanna. I mean, it’s obvious. Spencer says she loves Caleb, but she knows that he only likes her. Spencer opts to sacrifice herself for her friend, but Hanna is also all, “It’s fine, go forth and love,” to Spencer. There are no fights, no screaming, no hair-pulling. There are tears and a little bit of tension, as there would be with any situation like this, but this is what adult relationships look like. Sometimes, you know it isn’t going to work out, and you have to step back from the game.

Spencer knew what was up, because who could deny this?

Hanna and Caleb look like they end up together in the Season 7A finale (who knows what Uber A has planned for the second half of the season, though), but what’s more important is that Spencer and Hanna are still friends after all of this has gone down. The heart wants what the heart wants, but Pretty Little Liars handled this love triangle situation with so much less drama than usually goes into their plotlines. We can deal with being watched by a man sitting under a sheet, but we are not having two good friends kill each other over a guy.

The fact that Spaleb ended doesn’t make their relationship any less important — it just was never the right relationship for either of them. Hanna and Caleb are together now, and Spencer is alone, especially since Toby and Yvonne, his fiancée, had their sights on going anywhere but Rosewood. There’s a whole half-season of Pretty Little Liars to go, and whether Spencer ends up alone or with someone, there’s solace in the maturity that she and Hanna both showed that allows them to still be friends after this love triangle drama.

More like this
Every Horror Movie Reference In The 'PLL: Original Sin' Premiere
By Alyssa Lapid
The 'PLL: Original Sin' Creators Say A’s Identity Will Be “Very Clear” By The Season Finale
By Alyssa Lapid
Nicola Walker Is Confident About Emma & Ian’s Future
By Frances Stewart
Nicola Walker’s IRL Husband Is No Stranger To TV Screens
By Darshita Goyal
Get Even More From Bustle — Sign Up For The Newsletter