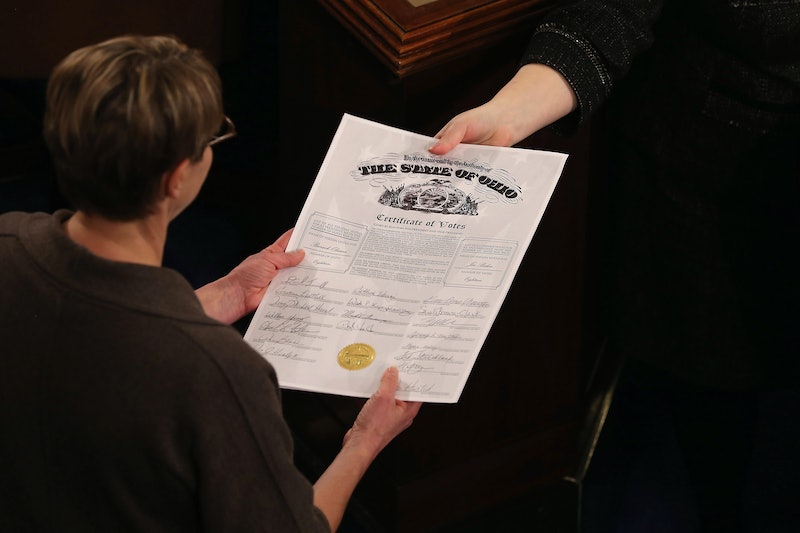 Now that we as citizens have wrapped up our part of the election, that is to say, contributing the popular vote, the process moves down the line to the Electoral College. Electors will cast their votes on Dec. 19. But who counts the Electoral College votes? Some powerful politicians may suffer a paper cut or two in the process.

On Dec. 19, electors will gather in their states to cast their votes for president and vice president. But the result of the Electoral College vote isn't announced on the same day. The are counted by Congress nearly three weeks later, on Jan. 6, 2017. While on Election Day, your state's board of elections was responsible for gathering and counting votes, that is not the case with the 538 electoral votes that will be cast on Monday. These votes go straight to the top, and have their own joint session of Congress dedicated to tabulating them.

After the electoral votes are cast, they are sealed and sent to Congress. The Constitution states that during a joint session of Congress, meaning both members of the Senate and House of Representatives are present, the Electoral College votes are counted and then the president and vice president are announced. But why would our lawmakers need to be involved in a task that seems so mundane and straightforward? Because like everything else in American elections, it's not.

Congress usually opens the votes, tallies and announces the same results that the American people have pretty known were coming for the previous two months. But that doesn't mean it has to go that smoothly. There's the potential for there to be an objection from a Congressman to the Electoral College vote, so long as at least one member of the House of Representatives and one member of the Senate from the state of the Congressional objector sign the written objection. At that point, both houses would retreat and deliberate separately on the vote.

While rare, there have been some instances of disruption during this vote counting session in modern history. Since the vice president serves as the president of the Senate, Al Gore was put in a particularly depressing situation in 2000, when he had to preside over the proceedings which certified his narrow and controversial presidential loss.

This year's election had Hillary Clinton winning the popular vote by four times the margin that Gore had over Bush in 2000. And after reports that the CIA concluded there was pro-Donald Trump interference in the election by Russia, I wouldn't be surprised if a simple vote count turns into something much more dramatic on Jan. 6.