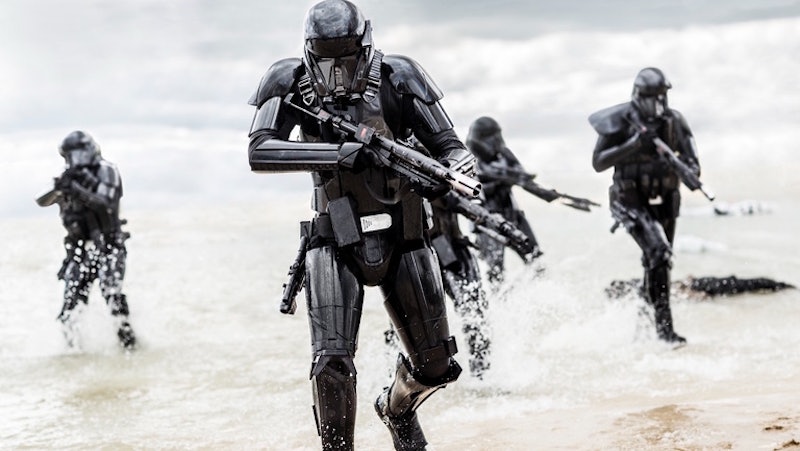 With last year's The Force Awakens taking place three decades after the last chronological Star Wars movie, fans were promised a bunch of new Stormtrooper variations to go along with the new setting — and the movie delivered. In addition to the First Order Stormtroopers, who looked similar but were more highly-trained than the Empire's Stormtroopers, the film also introduced specialized soldiers like Flametroopers, Snowtroopers, and baton-wielding Riot Control Stormtroopers. Rogue One introduces yet another type, and they're the most menacing yet: the black-armored Death Troopers. So how do Rogue One's Death Troopers compare to Stormtroopers?

In the most simple terms, Death Troopers are the most elite version of Stormtrooper there is. If Imperial Stormtroopers are the equivalent of a newcomer to the Navy who's just finished boot camp, then a Death Trooper is a Navy SEAL: the best of the best. But given that Rogue One takes place directly before the original trilogy kicks off, it does seem like an odd spot for a new type of Stormtrooper to debut, since they hypothetically should have been around for the events of A New Hope and the other movies of that time period. So where did these Death Troopers in Rogue One come from?

Unlike generic Stormtroopers, Death Troopers serve a more specialized purpose. They were under the command of Rogue One 's main villain, Director Orson Krennic, and served as his personal bodyguards and enforcers, according to StarWars.com. So since Krennic isn't around for the original trilogy, it's possible that whatever fate he suffers in Rogue One is also suffered by his Death Troopers.

As far as the soldiers' design — Tall, lean, and dark-armored — that comes from director Gareth Edwards' desire for a more imposing Stormtrooper, which he based upon concept art from the original trilogy, as he revealed during an interview at Star Wars Celebration:

"[At Lucasfilm] there's these drawers and they're basically full of all the Joe Johnston and Ralph McQuarrie original art. There's the original actual paintings that they showed the studio to try and get Star Wars made. And on some of those images, there were these Stormtroopers that were really tall and thin and they looked so cool and athletic. Like the thing is, when you put armor on a Stormtrooper, they look like NFL players, but these were sleek and S.A.S. looking, but white, Stormtroopers. So we thought let’s try to find some six, seven foot tall people who are really thin and try to figure out a new Stormtrooper that can actually hit its target with guns. And they became, eventually, the Death Troopers."

So even though the tall, black-armored, and elite Death Troopers are making their debut in Rogue One, some of their design cues actually predate the franchise's original Stormtroopers, meaning they're not quite as new as they seem, and have definitely earned their place in the Star Wars timeline.