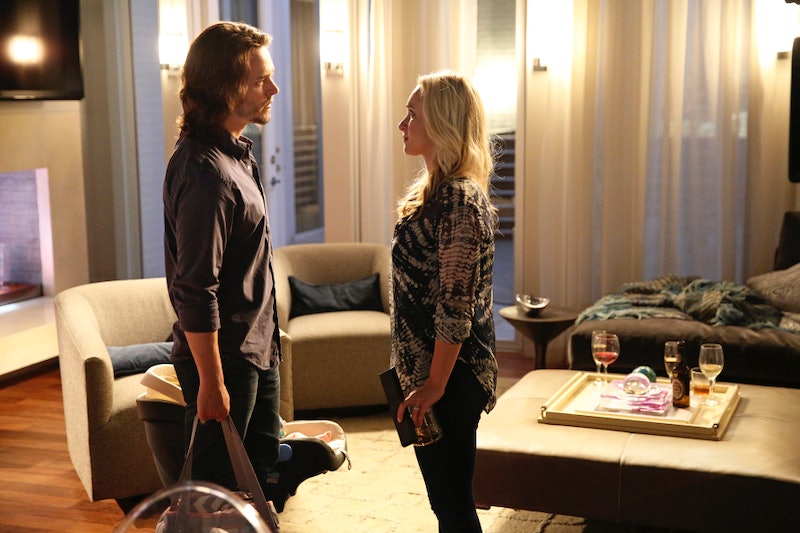 It was a close one for Nashville there — cancelled by ABC after Season 4, the show’s loyal followers waged a campaign for another network to pick it up, and luckily, they succeeded. Starting in Season 5, CMT will air the hour-long country music drama, and I, for one, am very excited. I mean, the show couldn’t end after the Season 4 cliffhanger finale — there was just too much up in the air (figuratively and literally). With the Season 5 premiere upon us, it’s important to know what happened in Season 4 of Nashville to fully enjoy its resurrection.

Nashville has certainly changed over the past four seasons. While some of the characters have remained pretty stagnant (looking at you, Deacon, with your falling off the wagon, pining over Rayna, and general anger management issues), but Juliette has been my personal favorite to watch. She went from surly teen idol to mom and wife to fallen woman, and Hayden Panettiere has been absolutely wonderful the whole time. If I could have one television wish this year, it would be that Avery Barkley and Juliette Barnes get back together, make another Cadence, and live happily ever after, writing country music songs and racking up plenty of awards.

On the eve of Season 5, let’s see where your favorite pairings ended up on Season 4 of Nashville.

Because these two are so linked, they get one big section. At the beginning of Season 4, we found out that Deacon is alive and his sister is on life support from when she had an aneurysm after she gave him a part of her liver. Beverly ultimately becomes unresponsive and when Scarlett decides to take her off life support, Deacon can’t forgive her. He can’t cope at the funeral and starts going to AA meetings again, but things change when he buys into his friend, Frankie’s bar and calls it The Beverly. Things are good, right? Nah. Rayna’s album is dead dead dead, and Deacon (a former alcoholic) throws himself into the bar. Rayna’s not too pleased. When Rayna starts working with bad-boy musician Markus Keen, Deacon becomes jealous, even though there’s nothing to be jealous of.

Shaken out of his state, Deacon proposes, Rayna accepts, and they’re getting married! Even though Deacon pushes a paparazzo right before the ceremony (hi, anger issues), he makes Rayna his bride, which is good, because they have a problem with Maddie, who wants to be a musician and whose friend Cash (Frankie’s daughter) is whispering in her ear, trying to get her to emancipate from her parents so she can have her own record deal. Deacon’s violent past gets brought up, the judge says, “Sure, you can bail,” to Maddie, and Rayna is devastated. But all is not lost! They get Maddie back when Deacon saves her from a predatory producer in New York. The family is back together! Yay!

Beginning of Season 4, Juliette is on top of the world. End of Season 4, she’s falling out of the sky. What a character arc. Let me explain — Juliette has a hit movie and a hit album, but she’s basically completely abandoned her family. Juliette had a hard hit of postpartum depression after she had baby Cadence, and in typical Juliette fashion, she kept it all bottled up and didn’t want to talk to anybody about it. Avery tried, but he needed to do what was best for the baby. They put up the guise of still being together, but eventually, Avery gets tired of it and files for divorce. At the same time, Juliette falls deeper into drug and alcohol use, and when she tries to jump off a building, Jeff, her manager, saves her but falls instead. Juliette was so blacked out she doesn’t remember this, though. Juliette goes to rehab, and Avery gets closer to Layla, who is staging some sort of single white female thing against Juliette because she knows that Juliette was responsible for Jeff’s death.

Fresh from treatment, Juliette wants to make amends to Avery, and he’s not really feeling it (who could blame him?). Eventually, Avery finds out that Layla has been lying to him the whole time and cans her butt, and Juliette confesses to the press about what’s been happening in her life and rushes home to a waiting Avery. But as he’s waiting at the airport, he learns that Juliette’s plane sent a distress signal 90 miles from Nashville and they’re not sure what happened.

Maddie is getting older, and Daphne is being left behind, especially when it’s clear that Maddie doesn’t really want to sing with her younger sister anymore. Cash, Maddie’s friend, comes into the mix and is the devil on Maddie’s shoulder, encouraging her to pursue a musical career and get emancipated from her parents so she can sign whatever she pleases. Daphne, throughout all of this, feels lost and scared for her sister — Maddie has abandoned Daphne when she really needed her older sibling. After Deacon rescues Maddie from a predatory producer in New York, the whole family is reunited. Phew.

Ugh, these two. Scarlett and Gunnar were not dating at the beginning of Season 4 — she was with hot doctor Caleb, even though she was really in love with Gunnar. But anyway, Scarlett has a bigger problem, considering her mother was on life support following a surgery and Scarlett had to make the decision to pull the plug. It was not a great situation. This all happens as The Exes, Scarlett and Gunnar’s band, are taking off, touring and getting some serious play in country music. They both date other people, but let’s be real — they love each other. Though their relationship was almost thwarted by a jealous star they went on tour with, Scarlett and Gunnar ended Season 4 in each other’s arms.

Both Layla and Will are trying to get their careers off the ground, but at first, it seems like only Will is succeeding (even though Luke dropped him from his label). He’s had a hard time since coming out of the closet (bigotry abounds), but people like the songs he’s writing, and so he’s decided to pursue letting other people use his voice while he’s figuring it all out. At the same time, Layla keeps getting passed over for other, better musicians, and when Jeff, her boyfriend, accidentally falls off a building and dies, she loses all control. As soon as she finds out how Juliette was responsible for Jeff’s death, Layla begins plotting her revenge and trying to get with Avery.

After struggling with whether he should speak up or not, Will appears on a nighttime talk show to defend himself and the gay community, and Luke signs him back to his label. Will also gets back together with his boyfriend, Kevin, and they’re happy by the end of the season. Layla doesn’t have the same luck, though, because Avery finds out about her plot to destroy Juliette and is not having it.