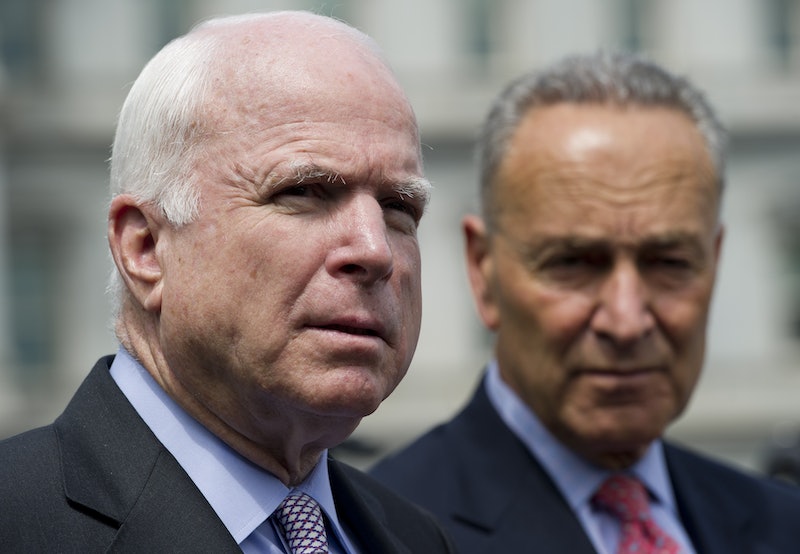 Now that the CIA has concluded that Russia hacked the 2016 election, a bipartisan group of lawmakers and electors are stepping across the aisle to investigate the integrity of our electoral system and potential Russian meddling therein. Led by Arizona Sen. John McCain and New York Sen. Chuck Schumer, there's a bipartisan call for an investigation into the Russian hacking of potentially both political party's national committees. At the same time, a bipartisan group of 10 electors have written a letter to the director of national intelligence, demanding a briefing on the CIA's intel that led the agency to conclude the election had been hacked with the goal of helping Trump win the White House.

It's a surprising turn of events in the wake of a campaign season and election that was, itself, anything but typical. But the possibility for bipartisan cooperation on the follow-up investigations could be the silver lining that emerges from the ashes of one of the most contentious elections in U.S. history.

Even leaders from Hillary Clinton's campaign, who have made a point in the weeks since the electoral upset to be deferential to the so-called democratic process, are ready to call shenanigans. John Podesta, chairman of Hillary for America, issued a sober statement about the "grave issues involving our national security" via Twitter on Dec. 12. It is Podesta's first tweet since the night before Election Day.

Podesta's statement not only sounds the alarm about Russian interference, but reminds readers that the Clinton campaign (and the Obama administration) warned about Russian efforts to influence the election as early as October.

As usual, however, the President-elect took to Twitter to denounce the CIA's conclusion, and the growing calls for a bipartisan investigation into Russian influence. In a Monday morning thread, Trump inaccurately wondered why "no one brought this up before the election."

The growing bipartisan calls to investigate the extent of Russia's influence in the 2016 presidential election mark the first significant pushback on Trump by members of his own party since the billionaire unexpectedly won the electoral college vote, despite losing the popular vote to Secretary Clinton by more than 2.5 million votes.

In fact, there's some indication that even the most intransigent Republican officials, who proudly made it their job to block President Obama's every effort at effective governance, are willing to set aside their differences to investigate the Russian involvement that McCain called "another form of warfare," according to The New York Times.

McCain said there was "no doubt" that Russia interfered in the 2016 election during a Monday appearance on CBS This Morning. Along with Sen. Schumer, the New York Democrat set to become Senate Minority Leader, both men said the threat Russia now poses to American national security is too severe to allow partisan squabbling to interfere.

Even Kentucky Sen. Mitch McConnell, who famously said his top priority as Senate Majority Leader would be to "make Obama a one-term president," grudgingly agreed to cooperate with an investigation into Russian hacking, The Guardian reported.

So, after nearly two years of a scorched-earth campaign that saw one candidate promise to ban an entire religion from entering the country, pledge to "build a wall" to keep out immigrants from another country, and brag about being able to grab women's genitals without permission, it would appear that the undeniable meddling of Russian hackers is where American politicians are willing to draw the line. At least now we know: All it takes to inspire bipartisan cooperation is a hostile foreign nation willfully tampering with one of the nation's foundational institutions.

It still remains to be seen, however, what elected officials on both sides of the aisle are going to do with the results of the pending investigations. Will electors stage a coup and elect Clinton president? Will Trump and his team refuse to give up power? Will we all be speaking Russian in four years? If 2016 has taught us anything, it's that nothing is too outlandish to become reality.

At this point, Americans basically have no choice but to follow the lead of our president-elect who, when asked if he would accept the results of the election, promised to keep us "in suspense."