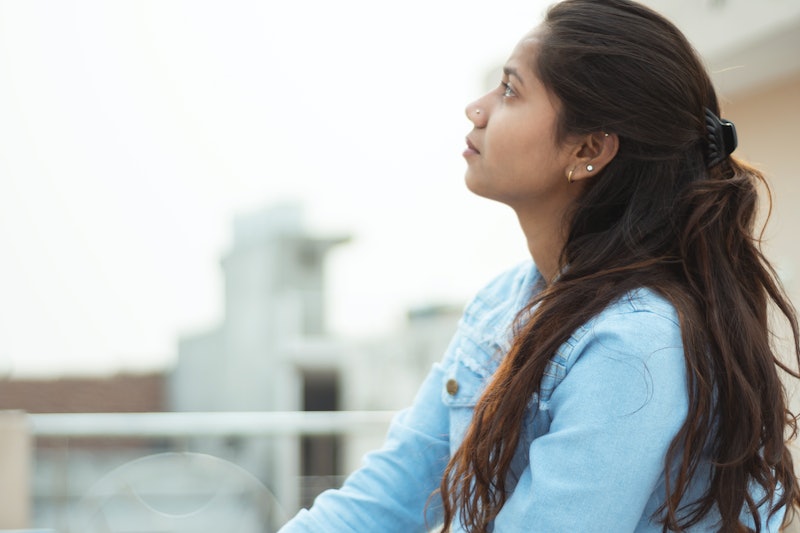 We at Bustle love giving you tips for how to tap into your sexual potential and troubleshoot when things aren’t going your way in the bedroom. But what about finding solutions to those stressful sexual health situations that inevitably crop up when you’re getting down? Emma Kaywin, a Brooklyn-based sexual health writer and activist, is here to calm your nerves and answer your questions. No gender, sexual orientation, or question is off limits, and all questions will remain anonymous. This week’s topic: what to do if you have syphilis.

Q: I just got my results back from my routine STD testing and found out that I tested positive for syphilis. My doctor said it’s good she caught it early because I can get treatment and be fine soon, but that if she had caught it later it could have killed me. Is that true? How do I make sure I don’t give syphilis to my sexual partners — and that I never get it again?

A: Syphilis. That sexually transmitted disease (STD) you probably learned about in history class as a potential reason why Nietzsche went mad. The important thing is that syphilis strikes many of us as an old-school illness, one that plagued people up until the 1900s and then just kinda disappeared before we were born, with the advent of penicillin. Right?

Unfortunately not. Syphilis never truly went away, and while we’re not back to Napoleon-era levels, syphilis is experiencing a resurgence. A renaissance, if you will. Between 2013 and 2015, rates of syphilis increased by 15 percent, to nearly 75,000 new cases. Which is a lot. New cases are mostly attributable to men who have sex with men, but the disease is also making a comeback in humans with vaginas. So it’s more important than ever (at least in our lifetimes) to know about this disease, how to identify that you might have it, and what to do to get cured so you can continue to live your life!

What Is Syphilis And How Can I Tell I Have It?

Syphilis is a bacterial infection that is transmitted sexually through pus-filled sores that live on or in mouths, genitals, or butts. It’s actually broken down into a few different types, each of which has its own symptoms.

Before we get to them, a very important note: When you read these, don’t panic! There’s a cure, so if you pay attention to your body, get tested regularly, and seek medical care as soon as you find out you have syphilis, you won’t get past the second stage.

In the first three weeks after being infected with syphilis, people get sores in the location where they were infected. So this could be your mouth, your genitals, or your anus. You might only have one sore, or you might get a few. These sores are painless, so if you don’t see them (like if they’re inside your butt or vagina) you might not even know they’re there. These sores, also called chancres, heal in around three to six weeks.

You can start to notice secondary syphilis a few weeks after your chancres heal. This usually looks like a rash that starts on your torso but can migrate to your whole body. The good news is that this rash usually doesn’t itch, but it can include sores in your mouth or on your genitals that looks like warts. For some people, secondary syphilis also includes other symptoms, like fever, sore throat, ache-y muscles, and even hair loss. These symptoms can go away after just a few weeks, or they can pop up sporadically for up to a year.

The next phase of syphilis is that it seems to go away. That’s right — after the rash and potential other symptoms, you can have no symptoms for years. It can even stay like this forever.

The final stage of syphilis is tertiary, or late-stage syphilis, and it happens after latent syphilis, when the symptoms come back — full force. This is where things get bad, medically speaking. Tertiary syphilis can cause damage to most of the body parts you deem important, including your brain, heart, bones, eyes, nerves, joints, and blood vessels. This can mean deafness, blindness, heart disease, memory loss, mental illness, and bone or soft tissue . It can eventually result in death. Luckily, only 15 to 30 percent of people with syphilis end up with tertiary syphilis.

Remember that if you catch your syphilis early and get treatment at say stage two (secondary syphilis), you won't progress to latent or tertiary. And even if you don't get treatment when you're in the latent phase, it's not 100 percent that you'll get tertiary or late syphilis, which is when things start to get medically dangerous (as opposed to just unpleasant). But since tertiary syphilis is so dangerous, it's important to try to catch this thing early, when it's more benign and easier to treat (which we'll talk about a bit later).

How Can I Get It?

Syphilis is sexually transmitted, but how exactly? It’s actually different than most STDs, which live in semen and vaginal fluid. Syphilis is transmitted through the pus in the syphilis sores. Specifically, this pus can transmit the infection to either a mouth, butt, penis, vagina that comes into contact with it.

So why is it an STD? These sores like to live in our sexy parts, so we’re most likely to give it to our sexual partners. Any time you’re touching a syphilis sore, you’re putting yourself at risk for getting this STD yourself. This includes oral sex.

The good news is that you do need to actually come into contact with a syphilis sore in order to contract syphilis. No research indicates that you can get it if no sore is present — because it's the fluid inside the sores that spreads the bacteria from body to body. How this gets tricky is that sometimes you can't see the sores, because they are inside a vagina or anus. So while a spot-check can definitely minimize your risk, it's not 100 percent effective.

How Can I Tell If I Have It?

There are so many symptoms of syphilis, all distinct to specific stages. How are you supposed to know if you have it, as opposed to something else? The only way to know for sure is to get STD testing. The good news is that if you complete your regular STD testing, chances are you’re already getting tested for syphilis routinely. That’s because it’s on the list of STDs you are often automatically tested for when you ask for STD testing.

How Do You Get Rid Of It?

The good news is that if you catch your syphilis early, you can treat it super easily with penicillin (or similar antibiotics if you happen to be allergic to penicillin). Specifically, this cures primary, secondary, and latent syphilis (it’s one intramuscular shot for primary, secondary, and early latent, with three doses each a week apart for later latent cases). If the infection progresses to tertiary syphilis, things get a bit more complicated. This is particularly the case if you end up with neurosyphilis, which is when the infection gets into your brain. In this case, treatment is a daily penicillin shot.

The good news is that no matter what stage of syphilis you have, you can get cured (although, as with gonorrhea, this bacterial infection is strong and resourceful and has started developing resistance to certain antibiotics, making it a bit harder to treat). The bad news is that curing your syphilis won’t retract any damage the infection has done to your body. This is why it’s so important to know your syphilis status early so you can get cured before any damage is done.

Can I Protect My Partners From Getting It?

You should follow your doctor’s orders not have sexual contact with anyone until you’re cured so you make sure you don’t infect any of your partners, who can then re-infect you in a never-ending feedback loop!

Condoms are also a great way to make sure syphilis isn’t transmitted — either to or from you. If the sores are covered by the condom (if for instance the sores happen to be just on the penis or inside the vagina or anus), then you’ll be protected with condoms. The issue is that not all sores are in these areas. So if you know you have syphilis and you have an active sore, it’s a good idea to make sure your partner cannot come into skin contact with those sores.

Can It Mess With Fertility?

Humans with male reproductive organs can experience fertility troubles related to syphilis. Syphilis can cause epididymitis, mess with the testicles, and result in tabes dorsalis (nerve degeneration) — all of which can cause infertility. A consequence of late-stage syphilis is erectile dysfunction.

Can I Have A Healthy Baby If I Have Syphilis?

Unfortunately, syphilis can mess with your ability to have a healthy baby. Specifically, if you get pregnant and you have untreated syphilis, you will have a 50 percent chance of miscarriage or stillbirth. It’s also possible your baby will get infected during childbirth — an 80 percent chance if you got your syphilis in the four years before pregnancy. If this happens, there’s a 10 percent chance your newborn will die, mostly likely just a few days after it’s born. Babies that survive with congenital syphilis (the name for getting syphilis through birth) can have some side effects, including a rash on their feet and hands, deafness, deformed teeth, and something called saddle nose, which is when the bridge of their little nose collapses.

So if you’re thinking about getting pregnant to make a tiny human, definitely get tested and deal with any syphilis beforehand, if at all possible (of course, not all pregnancies can be so planned).

STDs happen. It’s just the reality of being a sexual person. Syphilis was once a terrifying death sentence for people who carried it, but no longer! The best way to protect your partners is to know your status, use condoms, and, if you happen to become positive for syphilis, deal with it so that your diagnosis becomes a thing of the past and you can get back to being your amazing, fully sexual self!