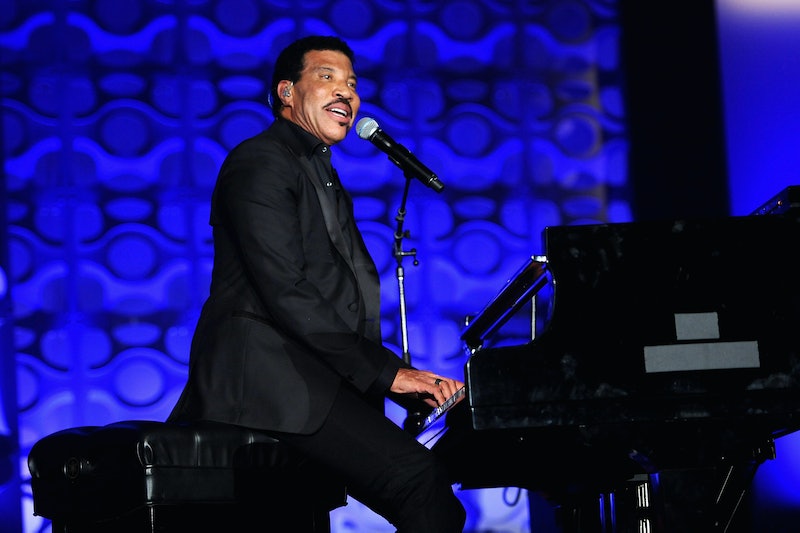 On Monday, the R&B legend behind jams like "Dancing On the Ceiling" announced that he will be hitting the road next year with the goddess who burst onto the scene in the early '90s with a ditty called "Vision of Love." Yes, Lionel Richie and Mariah Carey are going on tour. Lionel Richie: All The Hits featuring extremely special guest Mariah Carey is slated to begin on March 15 in Baltimore. You can check out all 35 of the show dates here.

Whose idea was it to put Richie and Carey on the same bill? How did this come up? Did Richie and Carey brainstorm this brilliant idea, like, over text message one afternoon? I bet that's what happened. (I assume all celebrities know each other and have each other's phone numbers and text each other all of the time. That's how being a celebrity works, no?) I would like to send all parties involved a thank you note. Or maybe even an Edible Arrangement. Something to let ‘em know how much I love this pairing. I am what I am, and what I am is a sucker for any event that puts two bona fide icons together. Oh, and I also happen to be a sucker for any concert that promises to deliver not just some of the hits, but all of the hits. Richie and Carey have approximately 10 million hits between the two of them, so that is a tall order. But if anyone can handle it, it's these two deities.

Presuming The All The Hits Tour lives up to its name, I would bet three bags of stadium popcorn that at some point during the set, Richie and Carey will sing the theme song from Endless Love together. They have to, right? Not only would it be incredible to hear these two unstoppable voices on the same record, but this really would be a collaboration decades in the making: In 1994, Carey and Luther Vandross covered “Endless Love,” the Richie-penned ballad originally recorded by Richie and Diana Ross in 1981.

A Mimi and Richie cover of Mimi's cover of Richie's song would be a feast for the ears and the soul.

If you would like to go see Richie and Carey’s All The Hits Tour, tickets will go on sale at Live Nation on Dec. 17.