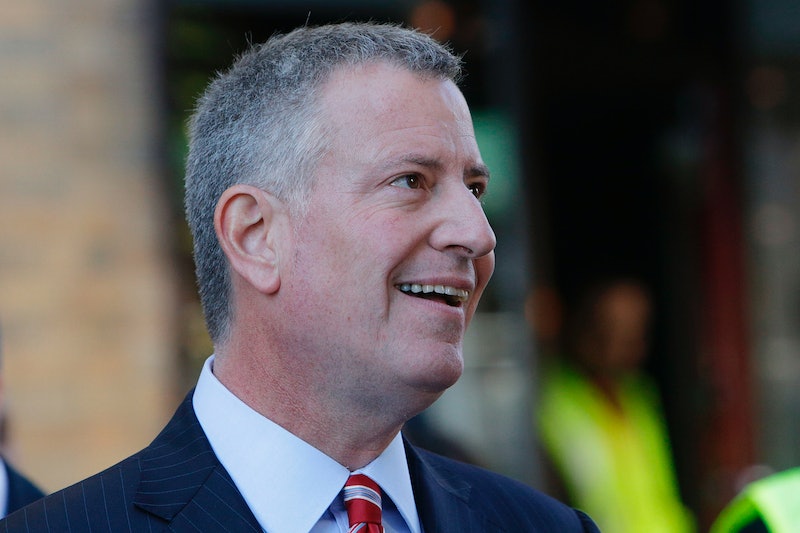 Speaking on New York's local ABC affiliate Sunday morning, New York City Mayor Bill DeBlasio said that Vermont senator and Democratic primary candidate Bernie Sanders' "message would have won the election," referring to the self-described "socialist democrat's" focus on worker's rights and economic inequality. While the finger-pointing among Democrats in the wake of Hillary Clinton's November loss isn't new, DeBlasio's take on the situation — that the message would have won even if the candidate might not have — is worth examining. Ultimately, in an election as messy and complicated as 2016 was, I have to conclude that nothing is quite that simple.

In a long, in-depth interview, Mayor DeBlasio commented on meeting with President-elect Donald Trump last month and about the failures of Clinton's campaign. Referring to Sanders' message, he said, "It's a message that Hillary Clinton had in her platform, and I honestly believe downplayed in the last few months of the election, including the debates, when she should have been pumping it up."

While the results of the election appear to show that Clinton fell short in areas that were sympathetic to that message — especially in the Rust Belt states of Pennsylvania, Michigan and Wisconsin — politics is rarely so exact, and while more economic emphasis might have helped, it's hard (if not impossible) to know that it would have lead to electoral victory.

While not making excuses for Clinton and her campaign for misreading the electoral landscape, I think it's important to acknowledge all the ways in which the right insulated itself from hearing what the left had to say. Clinton spoke endlessly about her economic plans, which, as DeBlasio noted, were greatly influenced by Sanders' during the primary. Clinton's plans to strengthen Obamacare, to invest in new jobs, and to offer free tuition at public colleges for families making less than $125,000 would have all greatly benefited many of the people who ended up voting against her. Instead, those voters were more inclined to believe the line being sold by the media: that she was intractable from Wall Street and big corporations.

DeBlasio also seemed to forget the shadow-boxing Democrats tend to do when it comes to more overtly socialist policy proposals. Though Sanders' socialist identification might not have been a big deal in the primary, it's difficult to envision a general election campaign where Democrats would have to run for their socialist-minded policies while running away from the label the Republicans would have undoubtedly tried to pin on them.

I don't deny that it's tempting to imagine Sanders thrashing Trump on a debate stage, or thinking that if only Hillary had talked to some of those white people in Wisconsin that we'd be in a different space. But, as DeBlasio himself admits, "it's highly theoretical ... we don't know how all the factors would have played out." He's right, and moreover, I could be wrong: Sanders could have trounced Trump. I know I'd certainly rather have seen President Bernie being sworn in on Jan. 21 than a President Trump, but... well... you can't always get what you want.