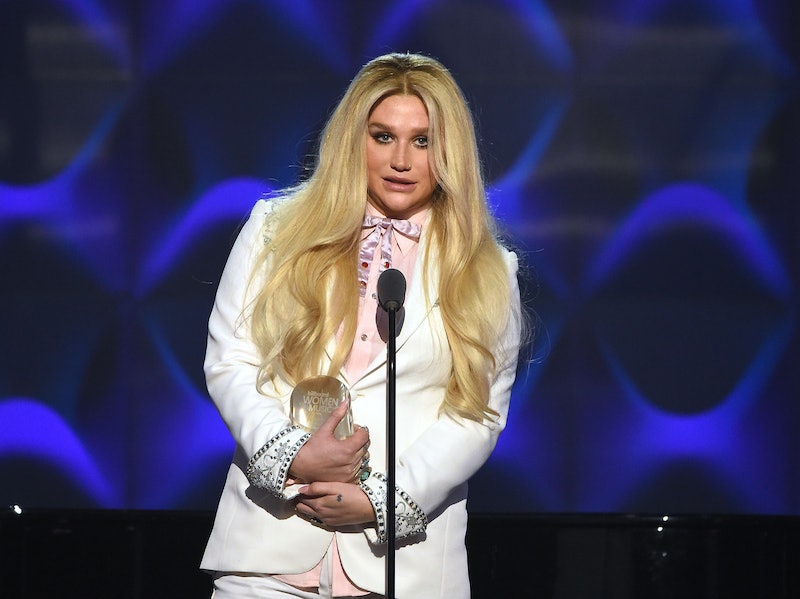 Kesha’s had a long, tumultuous year. If you remember, the hit-maker has been stuck in an array of lawsuits with Dr. Luke, whom she claims physically, emotionally, and sexually abused her during the decade or so that they worked together. (Dr. Luke has denied these claims, and he is currently suing Kesha for defamation.) But now, she’s getting back on track, and when the Billboard Women in Music Awards presented her with the Hit-Maker Award, Kesha vowed to work on the self-love and self-worth that she preaches in her own music.

Kesha was visibly moved and emotional as she got up to accept her award, and she got a standing ovation from the crowd. Kesha deserves it — she’s been through the fire and back, and I hope now that she and her career are in recovery mode. She basically went from a thousand megahits a year to none, and I can only imagine how stressful that can be on an artist. Kesha has pressed on, both in fighting for herself and for things that she thinks are right (she’s a huge proponent of LGBTQ equality), and I really admire her strength. Though Kesha has a lot of admirers, I know that it’s hard sometimes to believe in yourself. In her speech, Kesha vowed to start doing that.

“I’ve never really thought of myself as a trailblazer. I’m just as scared and flawed as any person I know. My message has always been to believe in yourself and love yourself just as you are, and when I sing and write those words, I do so as a reminder to myself as much as anyone else… I’ve decided to stand confident in my ever-changing, totally imperfect body and try to live up to and practice the self-worth and self-love that I preach in my music. “

Kesha also noted that she wants “to be a part of the solution,” so she is going to “use [her voice] for good and truth.” Amen, sister. By speaking out about her “crippling anxiety and being in recovery from an eating disorder,” Kesha is inspiring and giving a platform for young people that are going through the same issues. At some point, one must realize that Hollywood is a lot of smoke and mirrors, but Kesha? She’s the real thing, and I hope all the best for her.

More from Billboard Women in Music: