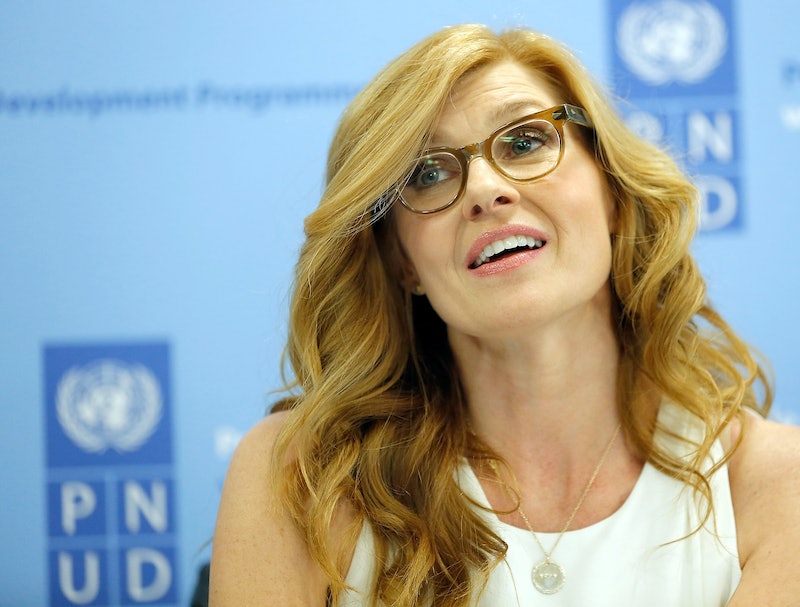 It looks like Nashville star Connie Britton's really changed her opinion on social media — or Sophia Bush actually has worn her down. Wednesday afternoon, Connie Britton joined Instagram and you probably missed it unless you're following Bush, who announced it late last night when she reposted a photo of Britton on her own account. We all freaked out when Britton joined Twitter on Monday because Tami Taylor's words of wisdom are golden — and now our imaginations are running wild with what a Connie Britton Instagram might mean.

Like Bush said in her post, "#AllHailTheQueen," and over 22,000 other Instagram users feel the same way — that's how many followers Britton has after posting her first photo 21 hours ago. The Friday Night Lights star's first two photos on her account announced that Britton's been named a goodwill ambassador to the United Nations Development Program. Which might explain why she joined the sites this week, but we're going to be a little selfish and assume that she realized how popular the hashtag "WWTTD" (What Would Tami Taylor Do) is. So what else will Tami Taylor — I mean, er, Connie Britton — post on her Instagram? We'll have to wait and see, but we've got a few suggestions for what types of photos she should absolutely post.

And now our suggestions:

We need at least one — or one thousand — either way, Britton is a hair goddess and has "obvi the best hair" according to Bush and the rest of a planet. Maybe she could shout out to her colorist/stylist so we could all praise the person that created the masterpiece — who are we kidding, that color is natural and she does her own hair. Still, ALL HAIR SELFIES ALL THE TIME, THANK YOU.

If there were ever a woman to convince you that wine is everything — it's Tami Taylor. And because Britton is Tami, whether FNL is off the air or not, we're going to assume that she loves wine just as much as Mrs. Coach. Unlike all of our friends that irritate us with photos of their wine glasses sitting in front of a fireplace, in front of the TV, or on the edge of their bath tubs — Connie Britton can put her wine glass anywhere she wants, filled with red or white, and we're going to like it and unlike it so we can like it again.

"#TBT to the last scene of #FridayNightLights with one of my favorite people — #ClearEyesFullHeartsCantLose." We'd take any combination of words with any photo from Friday Night Lights and be totally cool with it — and by cool I mean our nostalgia would take over and we'd leave work early to go re-watch the series on Netflix. Only Tami Taylor could compete with Scott Porter, I mean, Jason Street's epic FNL Instagram posts. Actually they wouldn't even have to be competing — the more FNL posts there are, the better the world.

We would just die from happiness. Britton obviously loves Tami Taylor as much as we do so why not post a weekly Tami photo with a one of her amazing quotes in the caption? There's no reason not to, it'd be a welcome break from ecard memes and gems like this deserve to be remembered:

Connie Britton knows everything — and one of those things is proper eyewear. Tami rocked the hell out of those aviators and proved that you don't actually look like Tom Cruise in Top Gun when you wear them. Double points if she's still got the pair from FNL — I'd be surprised if she didn't, considering they were so perfect that I'd like to believe they were made for her.

But really, who are we to tell Tami Taylor what she should do? #AllHailTheQueen

More like this
Twitter Is In Utter Meltdown After 'Derry Girls’ “Poignant” Finale
By Sam Ramsden
Billie Piper Just Confirmed 'I Hate Suzie’s Festive Return
By Kayla Blanton and Shahed Ezaydi
Yes, Billboard Queen Angelyne Really Ran For Governor Of California
By Brad Witter
50 Years After Creating Her Alter Ego, Angelyne Is Still Driving That Pink Convertible
By Gretchen Smail
Get Even More From Bustle — Sign Up For The Newsletter