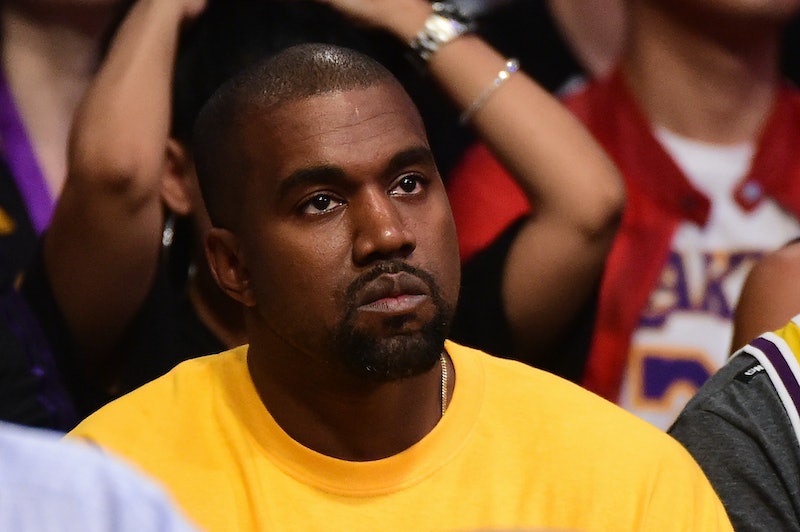 In news that is breaking the brain of anyone on the internet on Tuesday, Kanye West has been spotted at Trump Tower, arriving for a meeting with his entourage in tow. Kanye recently told the audience at one of his gigs that he would've voted for Trump, if he'd voted at all. The fact that the rapper has now been spotted at Trump's headquarters, presumably for a super serious meeting with the president-elect, is disappointing news for Kanye fans. So, now that the pair are meeting, are there any Donald Trump quotes about Kanye that are apt for this very situation?

Kanye famously featured an incredibly lifelike naked model of Donald Trump in his "Famous" music, alongside stars including Taylor Swift and Rihanna. During the Nov. 17 date of his Saint Pablo tour in San Jose, California, he elaborated on why he'd vote for Trump if he had to make the choice. Kanye said, "I don’t think his approach was just entertaining, because that trivializes it, I actually think that his approach was absolutely genius because it f*cking worked!" Clearly, the rapper has a lot of admiration for the president-elect, but does Trump return the favor? Here are just some of the things that Donald Trump has said about Kanye.

Trump told TMZ in Sept. 2009, following Kanye's infamous Taylor Swift interruption, that he thought the rapper was "disgusting." And the president-elect didn't leave it there, going on to say that he didn't believe Kanye's actions were chivalrous in the slightest: "He couldn't care less about Beyoncé. It was grandstanding to get attention."

2. On The Kimye Wedding

Way back in May 2014, when asked if he'd be getting an invitation to Kanye's wedding, Trump told Extra's Mario Lopez,

Well, I don't know that I'd be invited, but I definitely wish them the best of luck. I know them well and they're both very nice people so I hope they do well.

With Kanye's meeting at Trump Tower, it certainly looks as though Trump is building a real relationship with the star.

Trump spoke to Rolling Stone about the rapper in Sept. 2015, and said,

"He's said very nice things about me in the past... extremely positive things... He's actually a different kind of person than people think. He's a nice guy. I hope to run against him someday."

While most of us can't think of a crazier presidential race than Trump versus Kanye, it seems possible that the pair could go head to head.

At a rally in Sept. 2015, Trump discussed Yeezus star, and said,

"Kanye West, I'll never say bad about him. You know why? Because he loves Trump... He goes around saying Trump is my all-time hero."

To think that the president-elect said this over a year ago goes to show that the pair have been destined to become best buds.

5. The President-Elect Shared The Love

We're likely to hear all about the meeting from both Trump and Kanye in the coming days, but, until then, we'll have to wait patiently and try not to start panicking about this surprising friendship.