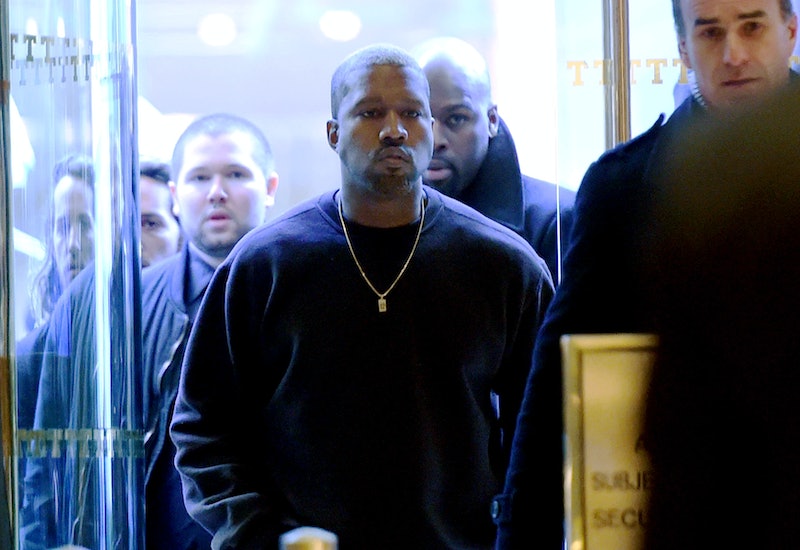 Kanye West was spotted in New York, but it wasn't just the fodder of the people over at TMZ. Oh, no, this Kanye spotting was also relevant to the likes of C-SPAN. The public service network, which strictly covers the goings-on in the government, got a video of Kanye inside Trump Tower. Turns out, the rapper is just one of the many people meeting with president-elect Donald Trump before he takes office. No, really.

In the clip, a newly blonde Kanye is seen walking through the Trump Tower lobby in New York City. He's dressed very casually, in all black, without his wife Kim Kardashian — just a team of men in suits. The #elevatorcam was set up by C-SPAN to catch those who are meeting with Trump for possible cabinet positions. With the Los Angeles-based Kanye making a trip across the country to visit Trump, it makes the question of "Why Is Kanye West Meeting Donald Trump?" a very legitimate one.

When those in the press ask West why he is meeting with Trump and what they'll be talking about, the rapper has little to say. Instead, he politely smiles and just says "hey" before entering an elevator that is soon filled to capacity. While it's unlikely that Kanye is there to talk about taking a position in Trump's government, the 39-year-old has made it clear that he does appreciate what the president-elect has done.

At a recent concert in San Jose, California, Kanye announced that, had he voted in the 2016 election, he would have voted for Donald Trump. “I actually think that his approach was absolutely genius," he told the crowd of Trump's successful presidential run. But, in that same concert speech, he also explained that he was "glad Trump inspired racists to reveal themselves" and that "sometimes things that you might think are bad need to happen, in order for change to f*cking happen. Sometimes you might have to not get your way to really understand what to do in the future, to be able to get your way.” Being that Kanye announced he's running for president in 2020 at the MTV Video Music Awards last year, he may be referring to a future run by him.

As of now, no one's quite sure why Kanye, who was recently hospitalized for exhaustion, was meeting with Trump, but it's clear the two had a good chat. After the 15-minute meeting, the two rode down to the lobby where they slowly exited together. The cameras were ready to get a shot of the duo and get an update on how their conversation went. Trump would only say their conversation was about "life," though he went on to add, "he's a good man. We've been friends for a long time."

Whether they're real friends or not has yet to be confirmed. But it's not the first time the two have sung one another's praises. After Kanye said he was running for president, Trump said, "You know what? I will never say bad about him, you know why? Because he loves Trump! ...He goes around saying Trump is my all-time hero."

Kanye didn't answer any questions from the press about whether his meeting with the president-elect was about performing at his inauguration in January. All he said was that he was looking to take a photo with Trump. The two then shared an epic handshake and parted ways with Trump telling Kanye to "take care of himself," and he'd see him soon. Undoubtedly, this left everyone wondering, "Did that really just happen?"

Why yes it did, and there's video to prove it.