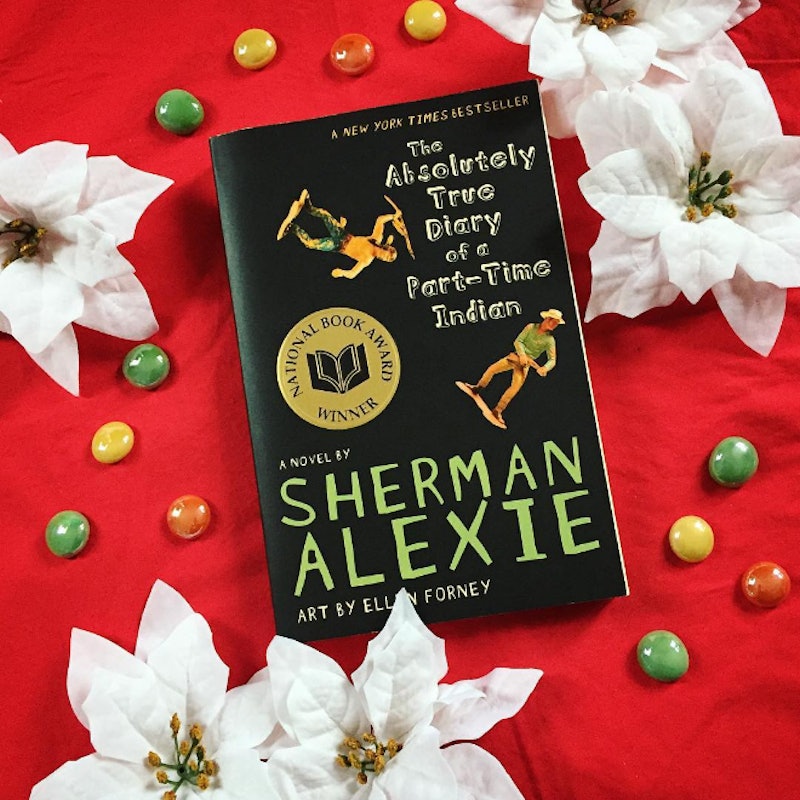 Great news out of Hollywood this week, as The Absolutely True Diary of a Part-Time Indian author Sherman Alexie announced that the upcoming Part-Time Indian film will cast Native American actors in its main roles. Alexie, who is adapting the screenplay based on his 2007 novel and will executive produce the film, says the adaptation "is going to be culturally authentic."

Alexie's announcement couldn't be more timely. The Standing Rock Sioux have spent much of 2016 camped out near Lake Oahe, where the planned route of the Dakota Access Pipeline threatens the local water supply. Standing Rock's lack of mainstream media coverage drew attention to other issues affecting Native American, First Nations, and other indigenous individuals and communities across the continent, including police brutality and the continued caricaturization of indigenous people by the media.

Many book lovers know how badly we need diverse books, and it is never more apparent than when you look at the shocking numbers on indigenous representation in children's literature. Native Americans make up about 1 percent of the U.S. population, but only 0.56 percent of the 3,400 books the Cooperative Children's Book Center (CCBC) received in 2015 were written and/or illustrated by Native American and First Nations authors. When you limit the CCBC's data to include only U.S. publishers, 3,200 titles are left, but that percentage shrinks by half.

In this literary climate, The Absolutely True Diary of a Part-Time Indian stands out. Many beloved books about indigenous characters — including Julie of the Wolves and Island of the Blue Dolphins — were not written by Native authors, and have real problems with their representations of non-white characters. Alexie grew up on the Spokane Reservation, and his novel centers on the trials and tribulations of Junior, a 14-year-old cartoonist, who must attend an off-reservation school where he is the only Native student.

Publishing's dismal representation figures carry over to Hollywood, as well. In the top 600 movies from 2007 to 2013, less than 1 percent of the speaking roles belonged to indigenous characters. Given Hollywood's long history of whitewashing, which stretches from Rock Hudson in Winchester '73 to Emma Stone in Aloha, it's likely that those meagre roles weren't even given to Native Americans and Pacific Islanders in the first place.

Hollywood's whitewashing problems came to a head last year, when Native American actors walked off the set of Adam Sandler's Netflix Original Movie, The Ridiculous 6, protesting the script's so-called "Native American" names — which included "Beaver Breath," "No Bra," and "Sits-on-Face" — and the costuming department's refusal to distinguish between Comanche and Apache. A Navajo actress who took her concerns to the film's producer's was told, "If you guys are so sensitive, you should leave." They did.

Compounding the problem of indigenous on-screen representation is SAG-AFTRA's policy of refusing to recognize actors' tribal enrollment, which prevents Native American actors from revealing their ethnicities to casting directors. Today, The Curious Case of Benjamin Button actor Myrton Running Wolf is petitioning SAG-AFTRA to change its policy. He says:

It is not illegal for SAG-AFTRA, or any other entertainment guild/union, to acknowledge or request tribal enrollment verification ... As a matter of fact, there are many government programs designed specifically to incentivize such actions. However, SAG-AFTRA's position — one that is endemic of the entire entertainment industry — exacerbates the suppression of American Indian involvement in mainstream media production by claiming that the simple act of stating one's Native American identity is unlawful.

The Absolutely True Diary of a Part-Time Indian has not yet announced any casting decisions. Alexie will executive produce alongside Hugh Jackman, Lauren Shuler Donner (Deadpool), and Temple Hill's Wyck Godfrey and Isaac Klausner.

More like this
The Biggest Differences Between 'Bullet Train' & The Book It’s Based On
By Arya Roshanian
Charlene White & MPs Lead Tributes For Bristol Bus Boycott Organiser Roy Hackett
By Sam Ramsden
Gassed Up Promises All Things Action, Risk, & Redemption
By Frances Stewart
Revisit 1992’s 'A League Of Their Own Cast' Photos After The New TV Series
By Grace Wehniainen
Get Even More From Bustle — Sign Up For The Newsletter