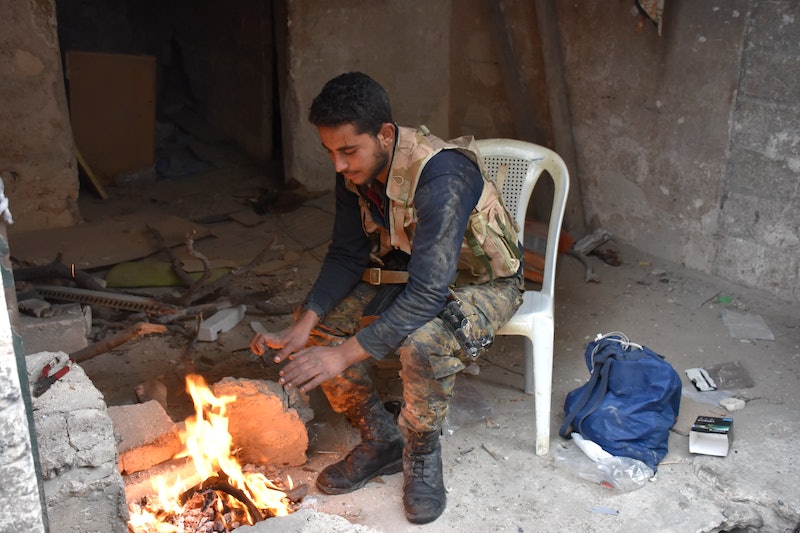 A recent ceasefire has been reached in Aleppo which will allow the surviving residents to vacate the Syrian city, NBC has confirmed. In the hours leading up to this agreement, though, Aleppo residents shared heartbreaking tweets about the destruction and hopelessness that has gripped their city. Aleppo has been at the center of Syria's more-than-five-year-long bloody civil war, and people have shared the terror and destruction from their neighborhoods.

Recently, pro-government forces have taken over much of the city. Thousands of civilians were stuck in the remaining rebel-held space — reportedly less than one square mile — which has been the focus of heavy bombing and gunfire. The United Nations received reports that 82 civilians were killed by pro-Assad forces, who have allegedly been entering homes in besieged Eastern Aleppo and shooting people on the spot. "We're filled with the deepest foreboding for those who remain in this last hellish corner," UN human rights office spokesman Rupert Colville (with the "hellish corner" referring to the eastern region). UNICEF cited a doctor who said, "Many children, possibly more than 100, unaccompanied or separated from their families, are trapped in a building, under heavy attack in east Aleppo," according to the BBC report.

The BBC reported that "a Syrian army spokesman said the allegations of killings were false and had 'no credibility.'" But the scene was described as "a complete meltdown of humanity" by the United Nations, according to an NBC News report.

Amidst such terrifying chaos, Twitter became a platform for Aleppo residents with shrinking outlets to express their feelings and experiences.

Lina Shamy, whose bio says "to the great Syrian Revolution I belong. my life is for it, my voice & my death," has used Twitter to call on Western leaders for help and the world at large for support. In this tweet from Saturday night, she described the scene on the ground in Aleppo, with people searching door-to-door for help. But most striking is when Shamy says a man outside was yelling that "ppl r pieces."

Mr. Alhamdo, who says on his Twitter bio that he is a "teacher, activist, and a reporter from inside Aleppo," tweeted this week about not knowing whether he and his family will survive this battle. But in this tweet, his wife feels there are perhaps worse things than death. "Why don't they kill us once. Why do they kill us every minute," Alhamdo quotes her as saying.

Bana Alabed is a seven-year-old girl living in Eastern Aleppo. Her mother uses Twitter to share what life is like for herself and her young daughter in this time of war. Like many others, Bana's mother, Fatemah, does not know if her family will survive much longer in their besieged neighborhood.

"I Don't Believe Anymore In The United Nations"

Mr. Alhamdo posted an emotional video on Tuesday using Periscope, where he decried the United Nation and the international community for their lack of support, saying, "I don't believe anymore in the United Nations, I don't believe anymore in the international community. They are satisfied that we are being killed. That we are facing one of the most difficult, or serious or horrible massacre that is in the new history." He said that on the other side of the city, pro-government forces were "celebrating on our bodies." He also issued a dark view of the world, saying, "We wanted freedom. We didn't want anything else but freedom. This world doesn't like freedom, it seems. Don't believe that you are free people in your countries anymore."

More like this
Why Eurovision 2023's Host City Won’t Be Revealed For A While Yet
By Sam Ramsden and Rachel Mantock
13 Photos Of Princess Charlotte Loving The Commonwealth Games
By Sam Rogers
SO Many People Are Obsessed With These Comfy Bras & Underwear On Amazon
By Claire Epting
People Are Calling These Hidden Gems Their Cheapest, Most Clever Finds Of The Year
By Rachel Bar-Gadda
Get Even More From Bustle — Sign Up For The Newsletter