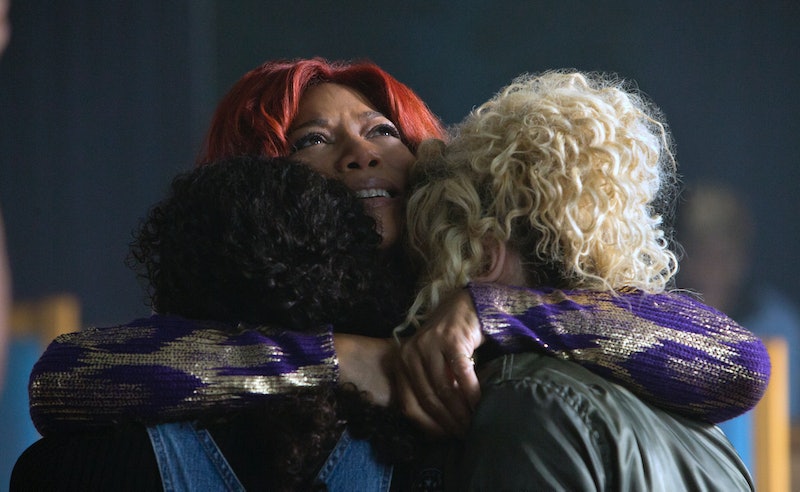 Lee Daniels is not exactly known for shying away from race, gender, and identity, so it was of no surprise to me that his new show, Star , features a trans character, played by former Real Housewives Of Atlanta star Amiyah Scott. Scott plays Cotton, the daughter of Miss Carlotta (aka Queen Latifah), and though it seems like Cotton is against Star, Simone, and Alex taking refuge in Miss Carlotta’s hair shop while they try their hand at stardom, Cotton and Star bond quickly. It's easy to see why they find solace in each other because Star highlights the dangers that trans women face in their daily lives.

When Cotton and Star meet, it’s not love at first sight, but Cotton knows that Star and the rest of her girl group are looking for a stage on which to perform, and Cotton knows how to get them a manager. Cotton works at a club that caters to a lot of Atlanta music industry types, and Star eventually agrees to come in and give some dances in order to meet a manager who can give her band their big break. I didn’t expect Cotton to do something good for Star and group, considering her attitude when Star came in, but I was very pleasantly surprised. After Star finds her manager (maybe, but that’s another story), she comes outside the back of the club to see a man attacking Cotton because he’s discovered that she’s transgender. Star, to turn a phrase, kicks his ass, helps Cotton up, and the two leave together.

This segment is definitely important for cementing Cotton and Star’s relationship. Star is not at all judgmental of Cotton and who she is. She does not stand for people getting hurt. Star’s defense of Cotton, pulling her off the ground, and going on their merry way probably means a lot to Cotton. Secondly, Cotton knows what it’s like to not be accepted and not be able to do what you want, so her support of Star’s musical journey means a lot to Star. After this, the two have a sort of understanding, which seems to be rare in either’s life — Star has been kicked down her whole life, and Cotton is dealing with a mother that constantly misgenders her. Star is not using its trans character as a novelty or something to have in the background — Cotton and all of her struggles are prominently featured, and I hope the show continues as such because the issues transgender people face shouldn't be ignored by TV in 2016.

More like this
'RHOBH' Star Diana Jenkins’ Fiancé Asher Monroe Once Shared A Stage With Kelly Clarkson
By Brad Witter
What’s New On Netflix: 'Never Have I Ever' & 'Indian Matchmaking' Return
By Arya Roshanian
Everything To Know About The HBO Max & Discovery+ Streaming Service Merger
By Brad Witter
What’s New On Netflix: 'Bridget Jones’s Diary' & 'Monster-in-Law'
By Arya Roshanian
Get Even More From Bustle — Sign Up For The Newsletter