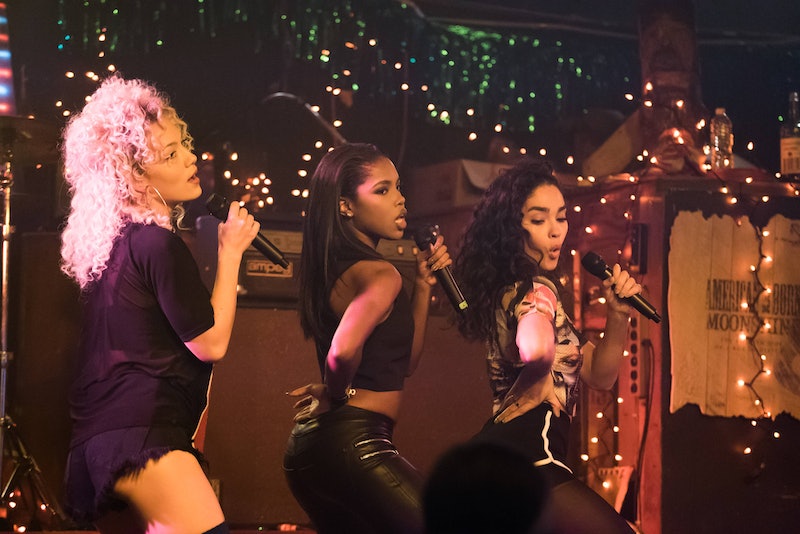 Fox's new drama series Star premieres on Wednesday night after Empire airs its mid-season finale — and you'll notice that both shows have a lot in common. They both take place in the music industry, have famous guest stars, and were co-created by Lee Daniels. But is Star an Empire spinoff? The answer is a bit complicated. Despite initial talk that the new series might be a spinoff, Variety clarified in April that Star is "not in any way an Empire spinoff." But because both series have top creative brass in common, Empire showrunner Ilene Chaiken told The Hollywood Reporter that she was open to an Empire and Star crossover.

"I think the show needs to launch first," Chaiken said during the Summer Television Critics Association Tour, according to The Hollywood Reporter. "But certainly, there's potential for it. The worlds, they're both grounded worlds and stories about music, so it's not outside the realm of possibility." So that means Empire and Star could be taking place in the same universe, much like NBC's Chicago series, CBS' NCIS series, and Fox's Brooklyn Nine-Nine and New Girl, which had a crossover recently. After all, Star follows the rise of an on-the-rise singing group of women (played by newcomers Jude Demorest, Ryan Destiny, and Brittany O’Grady) in Atlanta — and for Empire fans, this plot may sound somewhat like Hakeem's Mirage a Trois storyline from Season 2.

But the fact that Empire and Star may share the same music industry universe doesn't necessarily make Star a spinoff — usually, a character from the spinoff series will appear in the parent series in order to introduce a new world to the audience. None of the characters from Star have appeared on Empire yet, but it sounds like that doesn't mean the Lyon family won't come across the Atlanta-based singers at some point in the shows' respective runs.

It's understandable that people might think Star is a spinoff of Empire for another reason: Daniels announced at the 2015 Summer TCA tour that Empire would have a spinoff, but while that potential series has been much-discussed since then, it doesn't seem to have fully developed yet. Last year, TVLine reported from the event that Daniels said he wanted the Empire offshoot to center around a young Cookie Lyon and her family — which is a story currently being explored throughout the show's third season in flashbacks.

Does that mean those spinoff plans were actually folded into Empire's current season or is the Cookie storyline testing the waters for interest in that potential new series? It could be both, but I have to say that either way, Cookie's backstory has been fascinating to watch in Season 3.

And as an Empire fan, I'm excited to see what Daniels is up to next — in Star and any potential Empire spinoffs that he has in the works.