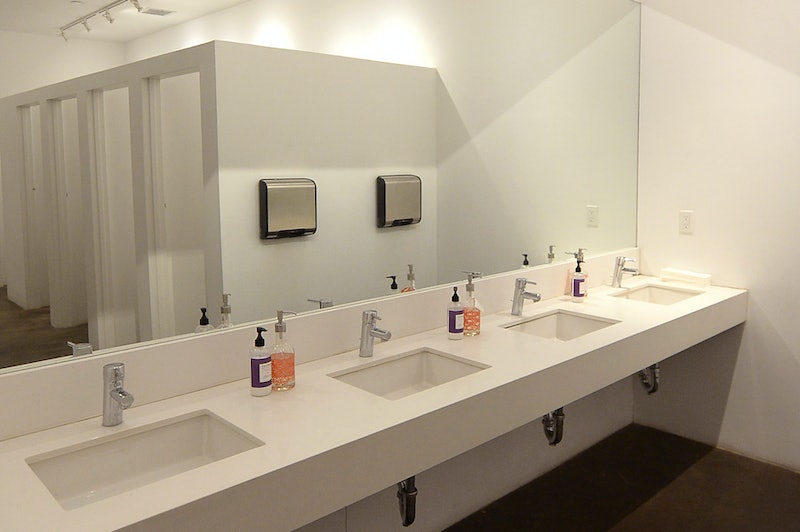 How Oklahoma can be such a wonderfully camp musical but the state of Oklahoma can be so draconian, I’ll never know. In an article Tuesday morning, New York Magazine’s The Cut puts a spotlight on Oklahoma’s Humanity of the Unborn Child Act, a state law passed over the summer that requires anti-abortion signs to be displayed in public restrooms. But the measure is facing some resistance — not for the insidious intent of the bill, no, but over who will pay for the signs.

Jim Hopper, president and CEO of the Oklahoma Restaurant Association, is apparently, like, totes fine with the idea of the signs. He just doesn’t like that businesses are being asked to pay for them. “We don’t have any concern about the information they’re trying to get out to women about their babies and their pregnancy,” Hopper told the Associated Press. “This is just the wrong way to do it.”

Ugh, right? It is so frustrating to want small government, but not so small that it’s not allowed to tell women what to do with their bodies!

I feel you, Hopper. I mean, where does the state get off requiring small businesses to fork over their hard-earned American cash for signs whose goal is to browbeat a woman into not exercising her Constitutionally-protected right to choose whether or not to bear a child? Even if they agree with said browbeating?

The law stipulates that the signs and the Oklahoma Department of Health’s website read: “There are many public and private agencies willing and able to help you carry your child to term and assist you and your child after your child is born, whether you choose to keep your child or to place him or her for adoption. The State of Oklahoma strongly urges you to contact them if you are pregnant.” Let’s see just how many of these “public agencies” will still be around to help you take care of your unwanted pregnancy after Donald Trump and his cabinet are through.

For all my sass, it’s important to underscore why this is a perfidious measure. We’re not worried about the influence these signs will have on women who have soul-searched on the question of abortion and already decided whether they are pro-life or pro-choice. We’re worried about those women — girls, even — who may be confused, conflicted, or even in crisis about what to do about an unwanted pregnancy. However subtle, these signs clearly have a political agenda, one which is definitely not necessarily in the best interests of every woman.

I guess I can’t be that surprised — Oklahoma’s record on abortion is pretty grim. According to the Guttmacher Institute, 96 percent of Oklahoma counties had no abortion clinic, and a "woman must receive state-directed counseling that includes information designed to discourage her from having an abortion and then wait 72 hours before the procedure is provided."

Moreover, this isn’t even the most #omgwhat thing in this bill: if you want to allow your jaw to drop a little farther, you can check out the bill’s provisions for “achieving an abortion-free society.” Not OK, Oklahoma. Not OK.

More like this
'The Capture' Is Finally Back – & S2 Looks Tense AF
By Sophie McEvoy and El Hunt
The Lionesses Are Calling For Equal Access To Football In Schools
By Sophie McEvoy
It’s Official: 'The Bachelorette' Is No Longer A Fairy Tale
By Samantha Allen
42 Black Owned Fashion & Beauty Brands To Support Today & Always
By Mekita Rivas, Shea Simmons, Kui Mwai and Dominique Norman
Get Even More From Bustle — Sign Up For The Newsletter