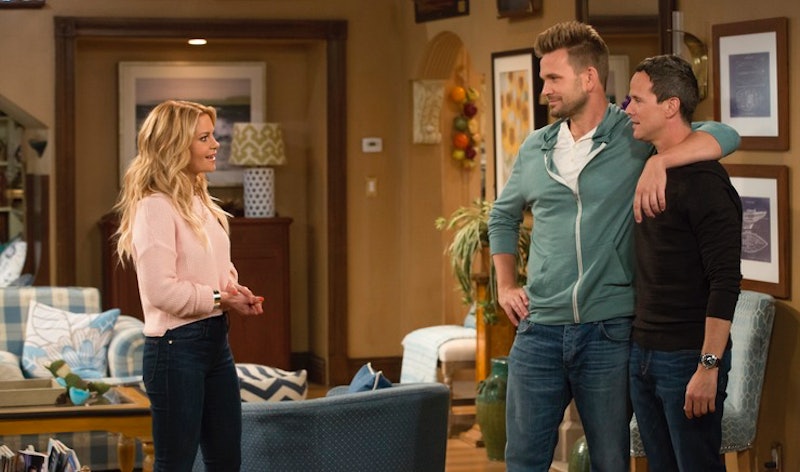 I'm known for getting way too invested in the lives of fictional characters, but there are few TV couples I've rooted for more than I have for Steve and D.J. from Fuller House. This is probably because as a kid, Full House was my favorite show, and these two were basically the gold standard for the relationships I'd hoped I'd have when I got older. And now, even though things aren't looking too good for them, I'm still not ready to give up hope that they'll end up together eventually. D.J. and Steve's fate isn't sealed on Fuller House , and I'm confident that there's still plenty of time for them to find their way back to each other. Warning: SPOILERS ahead!

I know, I know — Fuller House Season 2 ended with Steve proposing to his girlfriend, C.J., and as much as I wanted to hate her from the moment she was introduced, I can't help but love her (and her adorable kid). If there was ever a time to give up my shipping of D.J. and Steve, it's now, when he's clearly engaged to someone else. But I'm not convinced that has to mean that there's no way he and D.J. will ever get back together.

I mean, think about it. The feelings are definitely still there, and I think they're mutual. After seeing D.J. and Steve together at the high school reunion, it seemed pretty obvious that there's something there, and D.J. admitting that she would have chosen Steve if he hadn't told her he had a girlfriend first was a big clue that their story isn't over quite yet. Steve has done so many sweet things for D.J. this season that a platonic friend wouldn't do, like securing those front row New Kids on The Block tickets. He may have let Matt take the credit, but to me, that was pure love. How could they not end up together after that?!

Plus, C.J. clearly seems to think that there's still something going on between her new fiancé and his ex. Did you see her reaction when she caught them planning her proposal together?! And speaking of that proposal — who asks their longtime ex girlfriend to help them plan how to propose to their new girlfriend? I would have been pretty mad if that happened to me. It's just not the ideal situation when you're planning to spend the rest of your life with someone.

And I feel bad rooting for Steve and D.J. so hard when Matt is such a sweet guy, but something has definitely felt... off to me about his relationship with D.J. all season long. They're cute together, but it doesn't feel like they're meant to be. Maybe because she's supposed to be with her constantly eating high school sweetheart? Just an idea.

I'm looking forward to seeing what happens between these two when Fuller House returns for Season 3 — as long as what happens is D.J. interrupting Steve's wedding so we can finally see them living happily ever after together. What? It could happen!