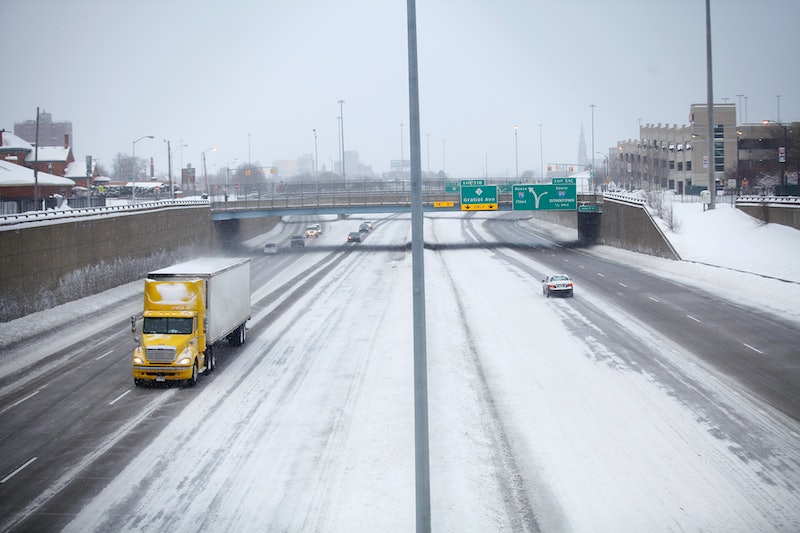 Finally, 2016 is coming to a close. And while there are certainly a few reasons to be happy about that after an exceptionally depressing year, with it comes the inevitable chill of winter weather. Before winter officially kicks off on Dec. 21, the U.S. will be hit by a major cold spell. Parts of the country are already experiencing extremely cold temperatures due to the polar vortex.

Parts of the upper Midwest are seeing freezing temps — especially in North Dakota, where it's expected to drop down to 2 degrees Fahrenheit. Each of the two poles, the Arctic and Antarctic are surrounded by a large area of low pressure cold air. When the air from the Arctic moves south, it creates a polar vortex, and can extend down to the southern areas of the U.S.

While the Midwest gets the brunt of the severe weather (temps in Bismark, North Dakota are feeling like 20 below), it's still going to be very cold outside of the upper Midwest. The Mid-Atlantic and Northeast will experience a big drop in temps (contrasting what has been so far a not terribly cold December for New York). The regions surrounding the Great Lakes will experience a good amount of snow toward Wednesday and Thursday. According to CBS, this cold spell will bring temps in Boston to a 15 to 20 degrees lower than average for this time of year.

The Washington Post reported that 75 percent of the mainland United States will experience temperatures below freezing this week. That statistic alone is pretty incredible, but it's also important to put it into context.

While this all seems very alarming, and the name "polar vortex" itself is pretty terrifying, Vox reports that the dip in temperature isn't all that unusual. The reason behind the vortex part of the name is because the air actually spins counter-clockwise, like a hurricane. When the vortex weakens at the Arctic, the system moves south. It's a somewhat normal occurrence that became a big deal in 2014 when it happened in March, which was later than usual and sent temperatures plunging abnormally for that time of year.

So, this week seems like a good time to break out your winter gear, and prepare for all of the polar vortexes that the rest of 2016 and 2017 have in store.

More like this
Why Experts Say Sleeping With A Fan On Isn’t Totally Risk-Free
By Sophie McEvoy
The 6 Best UV Umbrellas, According To A Dermatologist
By Rachael Green
The 8 Best Indoor Door Mats For Your Home
By Jenny White
What Is Ben Affleck's Net Worth? At 50, The Oscar Winner Makes 8 Figures Per Film
By Meg Walters
Get Even More From Bustle — Sign Up For The Newsletter