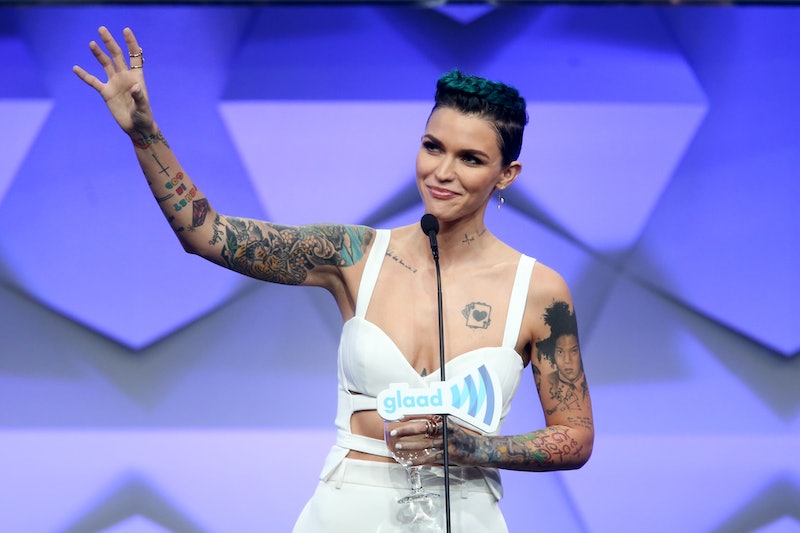 In dream casting news, Variety reports that Orange is the New Black actor Ruby Rose is in talks to appear in Pitch Perfect 3 . The Australian, with her always-cool vibe would be the perfect addition to the quirky set of characters and will join returnees Anna Kendrick, Rebel Wilson, and Brittany Snow. She's the pitch perfect person to add to Pitch Perfect with it's already aca-awesome cast of empowered and inspiring women.

Not much is known about the third part of Pitch Perfect, which was written by Kay Cannon. What we do know is that Trish Sie (the creator of a bunch of those fun OK GO videos) taking the reigns of director — a role that was previously performed by Jason Moore for the first movie and Elizabeth Banks in the sequel. Banks is still involved with PP3 but she'll be serving as a producer and reprising the role of Gail. We also know that the movie is set to release December 22, 2017.

So basically, we aren't quite sure what sort of character Ruby Rose might be in this new movie, but that's where the theorizing comes in! If she gets cast will she play Fat Amy's cousin visiting from Australia? Or could she play a member of a rival a capella group. Most importantly, will she sing?

It's certainly possible that the actor and model could grab a singing role. This lady of man talents released a catchy single with Australian musician Gary Go in 2012 called "Guilty Pleasure." In it, her voice sounds dreamy and sweet enough to compete or harmonize with the Barden Bellas — whichever her potential character prefers.