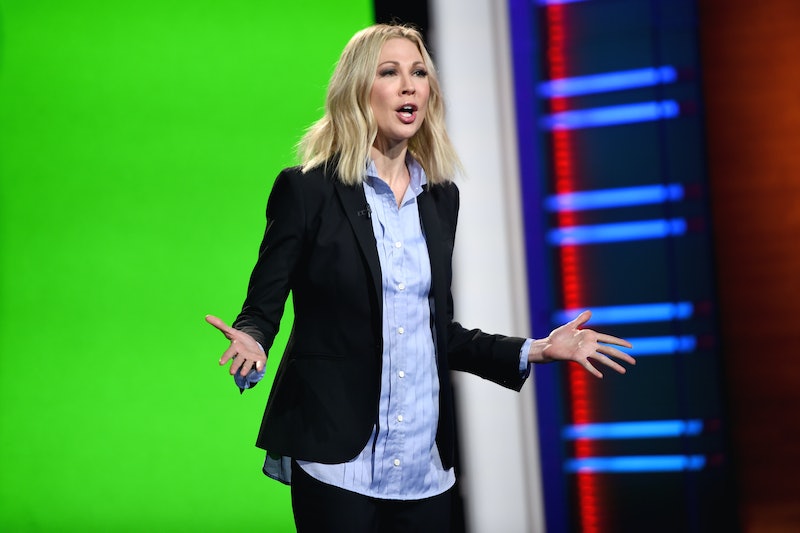 If you managed to look away from the state maps on one of the major news networks long enough to watch The Daily Show on Election Night 2016, you witnessed an unusually emotional display; one that mirrored the feelings of many voters across the country in that moment. That emotion continued into the following day's episode, on which correspondent Michelle Wolf delivered an emotional plea to the women who voted for Donald Trump and made him the president-elect. But once the dust had settled a bit, the series returned to making more irreverent jokes, even touching on Trump's cabinet appointments with levity. The Daily Show went back to the business of making us laugh at a time when we need it the most. But when I spoke to four women who work on the beloved political comedy series, it became clear that getting back to that task wasn't exactly easy.

"I think the first couple days to weeks, I think it kind of felt a little like The Walking Dead around here. Everyone felt that they were mourning, it’s taking a long time for everyone to really process their feelings through this I think," correspondent Desi Lydic says, on the phone alongside her colleagues Wolf, executive producer Jen Flanz, and staff writer Hallie Haglund in their New York office in early December.

It's a feeling that didn't just hit the team one time. Haglund explains, "We had a week off through Thanksgiving and we worked sort of through the election and I feel like the week we came back everyone was really energized, like 'OK we’re gonna do this. We’re gonna take this guy down. And now it’s the second week back and I’m like, 'Oh my god. This is going on for so long."

For Flanz, the aftermath feels a bit like the movie Groundhog Day. "It’s like, every time we run a clip of him, I’m like, 'Oh wait, yeah, he’s gonna be the president.' Every time. It’s like selective memory. I just selectively forget every day that that really happened."

To many people who voted against Trump, these words likely sound like things we've said ourselves in the weeks since Hillary Clinton gave her concession speech. It's all so familiar. And like so many people, just trying to get through their own daily routines, the crew at The Daily Show is trying not to let the upsetting election results keep them down. More importantly, they're trying to keep Trump from running the show from his Twitter tower.

"We’re definitely trying to grab other stories that aren’t Trump stories since he’s dominating the news," says Flanz, who names issues like Black Lives Matter and gun control as issues she and the other makers of The Daily Show hope to shed light on. "[We're] just really digging deep and looking for stuff that’s news from different places so that we’re not only covering what Trump tweeted yesterday."

"I think he’s just a toddler, who just can’t not have the attention on him," adds Wolf, clearly fed up with Trump's ability to toss out a handful of characters on social media and create a media storm in a matter of minutes.

"The thing is if you can’t joke about it, what are you gonna do, you know? Yeah it’s scary and we’re scared, but at the end of the day, we’re a comedy show."

But despite the Flanz' and Wolf's desires, Trump continues to be a topic that demands covering, and even when he's not, the division his election created in the United States — as Wolf notes, even the upcoming women's march in Washington this January is in reaction to Trump. "It’s like, will there ever be a break?"

Unfortunately, there doesn't seem to be one in sight, because no matter what, the president is bound to be embroiled in any major national issue. And with the way Trump responds to comedic takes on his behavior (see: literally every tweet he's written about Alec Baldwin's impression of him on SNL ), it would stand to reason that being someone who jokes about Trump for a living could be a scary place to be. Fortunately, for fans of the show, that fear doesn't seem to be in command behind the scenes.

"The thing is if you can’t joke about it, what are you gonna do, you know? Yeah it’s scary and we’re scared, but at the end of the day, we’re a comedy show," says Wolf.

If anything, the only scary thing is the simple fact of reality. "The only thing that I feel scared of are like the things we joked about, the things that were like joke quality forecasts, are just actually coming true," adds Haglund.

And as the team gets ready to take a long hiatus after an election season that felt like it just wouldn't end, Flanz looks to the future and 2017, where she says the show will continue as it always has.

"I think the way we make the show is kind of just the way we’ve always made it, which is we come in, we talk in the morning about what matters to everyone who works here to get on the show, what’s resonating with Trevor and our writers and our producers," she says.

Though that something will definitely have to involve Trump on a fairly regular basis, The Daily Show team seems more than prepared to get back to the business of making comedy out of logic-defying reality. And thank goodness for that, because if there's anything that America is going to need come January, it's a really good laugh.

More like this
Gabby & Rachel Reveal How That 'Bachelorette' Rose Ceremony Twist Happened
By Grace Wehniainen
At 14, D'Arcy Carden Was Sneaking Out To Parties & Crying Over Kurt Cobain
By Ivana Rihter
In Rap Sh!t, Social Media Has Main Character Energy
By Aramide Tinubu
Everything To Know About 'Evil' Season 4
By Meguire Hennes
Get Even More From Bustle — Sign Up For The Newsletter