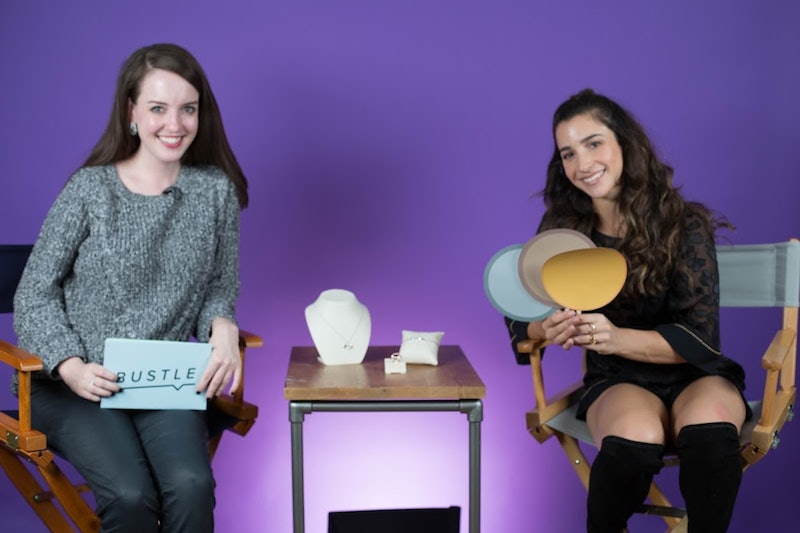 Aly Raisman is no stranger to the spotlight — she's pretty used to it by now after, you know, completely dominating at both the 2012 and 2016 summer Olympics. But when it comes to navigating the complicated routine we call online dating and dating apps, Raisman says she'd rather stay in the dark — she doesn't even have a Tinder account. "I don't like that because it's mean. It's all about looks," she says while visiting Bustle's New York office for a Facebook Live segment. "It doesn't deserve a medal. I think it should be more about personality."

Besides, the captain of the 2016 U.S. women's gymnastics team doesn't have time to waste blindly swiping left and right on strangers. Since Rio, Raisman has been keeping plenty busy touring with her teammates and squeezing in family time. "I still feel like I haven't had a chance to recover from the Olympics," she says. "I'm still exhausted, but I'm not complaining. I'm enjoying everything. I've been very very lucky."

Her most recent project? She's teamed up with Piercing Pagoda as a brand ambassador for its Heart-Full Hands jewelry collection, which is something she's particularly excited about. That's because the collection carries a special message, she explains — each piece is designed to show two hands molded into the shape of a heart. "It's basically spreading the message of love and supporting one another," Raisman tells Bustle. "I think that in today's world we could really use that."

Still, you won't find Raisman on any dating apps. The Olympic gold medalist says her greatest support network is her family, and that's not going to change any time soon. "I really just look to my family for advice and just having them support me — there's really nothing like your family."

OK, so it's clear Raisman values things like spending time with loved ones over spending time worrying if she's getting more right swipes than anyone else in the Olympic village, but what else deserves a medal in her eyes? We had Raisman award a gold, silver, or bronze to everything from early morning workouts to wearing leggings as pants during a game of Pop Culture Olympics she played with Bustle. Check it out in the video below:

A few of Raisman's notable gold medalists? Zac Efron, for one. "I'll give him a gold because he was very very nice, and he flew to Rio to see [teammate Simone Biles], which was very kind of him," she says. Totally fair, but there's another, even bigger love in Raisman's life — Netflix marathons. "Absolutely gold," she says. "I love Vampire Diaries, and I love The Originals. I think it's very important to binge on Netflix every once in a while."

But don't get her started on ghosting. "That doesn't even deserve a medal," she says. "That's mean. I thought ghosting was like when you go out and try to find a ghost. That's what my teammate Laurie [Hernandez] will do. We stayed in a 'haunted' hotel one time and she just went around when it was dark at night and took photos on her phone to try to find a ghost — so that's what I thought it was."

Honestly, it sounds like way more fun than the alternative.