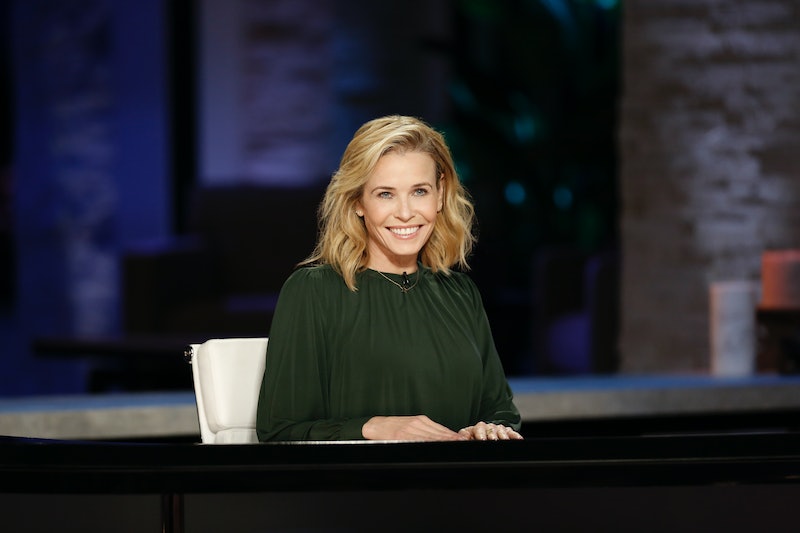 When I learned that Chelsea Handler had a new talk show premiering on Netflix, I was beyond excited — I'm a longtime fan of her stand-up comedy, I've read all her books, and I religiously follow her on social media. In short, I looked forward to a fun, 30-minute midnight break three nights a week. But, I didn't expect that Chelsea on Netflix would be one of the most important shows of 2016. Although Handler brought her trademark blunt, self-deprecating sense of humor to the series, she was also keenly aware that the vast majority of her viewers are young women — and she used her platform to promote important causes and encourage us to get involved in politics and volunteer work.

When Chelsea premiered in May, she vowed to place the election front and center — and she held true to her word. In addition to interviewing a variety of political experts, she traveled all over the country to speak with ordinary citizens about their thoughts regarding this highly unusual race. And, in an election where it was crucial that millennials went to the polls, Handler joined forces with Rock the Vote in an effort to galvanize young people. She provided the link and instructions on nearly every single episode and it was effective — Handler claimed on her post-election episode that the effort was responsible for the voter registration of approximately 7,000 people.

The morning after Clinton's loss to Trump, Handler and her guest, Senator Barbara Boxer, provided much-needed comfort and encouragement to viewers — although both women openly admitted that it wasn't an easy feat to film the show just hours after watching Clinton's concession speech. In a November interview with Bustle, Handler explained that she didn't think she could get through she show — but her staff reminded her that they and her viewers needed her more than ever that day.

And, Handler has no plans to abandon the political focus of her show going forward. After all, midterm elections are just two years away and she remains committed to getting more young people involved in politics. "We have to get people involved in the midterm elections. We have to make people aware that it's cool to vote, it's cool to get involved politically, and being lazy is really a terrible excuse," Handler told Bustle in the same interview. "Do you ever want to look back at your life and say that you were uninformed? Women fought forever to get us the right to vote and it is sacrilege to not use that privilege and not exercise the right to vote."

Handler chose her guests carefully, and a wide variety of important topics were covered — including LGBTQ rights, human trafficking, the flaws in America's education system, and recovering from the death of a loved one. But she didn't simply spotlight important issues — Handler always asked her guests what actions, big or small, viewers could take in order to make a difference. After each episode, we could easily visit a website in order to educate ourselves further and seek out volunteer opportunities.

Plus, Chelsea was the feminist show we needed in 2016 — and not just because we need proof that women are funny. (Seriously, anyone who still needs "proof" of this is cordially invited to join us in the 21st century.) Handler used her platform to promote feminism and empower young women — and some of the best episodes featured her 11-year-old niece, who acted as co-host.

She also used humor to drive home an important point that unfortunately still needs to be addressed in 2016 — successful women can lead happy, full lives without getting married or having children. Handler made hilarious "You Can Say No" PSAs a recurring segment on her show, highlighting all the reasons she loves the independence of the single life.

As someone who is really tired of assuring people that I'm perfectly happy being single and have no plans to get married, Handler's message is incredibly validating. Of course, there is one important guy in her life — his name is Chunk and he's in every episode of Chelsea, casually strolling around the set while looking seriously dapper in his bandana. (If that's not reason enough to watch this show religiously, I simply don't know what is.)

Finally, Handler is forthright and honest with her viewers. After the election, she did some self-reflection and said she uses the word "hate" too much and will make a conscious effort to eliminate it from her dialogue — and she challenged viewers to do the same. Most recently, she published an open letter on Thrive Global titled "We Have a Problem with Women Supporting Women." As usual, Handler didn't adopt a holier-than-thou attitude — rather, she prefaced the letter by saying she knows she can do better, and it's something she plans to work on. Then, she encouraged the rest of us to do the same.

I think the reason Handler's messages have resonated so successfully on Chelsea are precisely because she is so honest with her audience. When she's uninformed about an issue, she fully admits it and asks her guest thoughtful questions in order to educate herself. When she recognizes flaws in herself, Handler calls her own bluff and then challenges her viewers to reflect on our own behaviors. She's a role model to young women because she doesn't talk down to us — and I'd venture a guess that's the reason Handler successfully got so many young people excited to vote. Luckily for us, Chelsea will return for a second season in April and I'm sure it will include more straight-talk, amazing guests, and hilarious PSAs.

More like this
Here’s Everything Coming To & Leaving Netflix In August
By Jake Viswanath
What’s New On Netflix: 'Never Have I Ever' & 'Indian Matchmaking' Return
By Arya Roshanian
What’s New On Netflix: 'Bridget Jones’s Diary' & 'Monster-in-Law'
By Arya Roshanian
Reese Witherspoon Got Hooked On ‘Never Have I Ever’ After Son Deacon’s Debut
By Stephanie Topacio Long
Get Even More From Bustle — Sign Up For The Newsletter