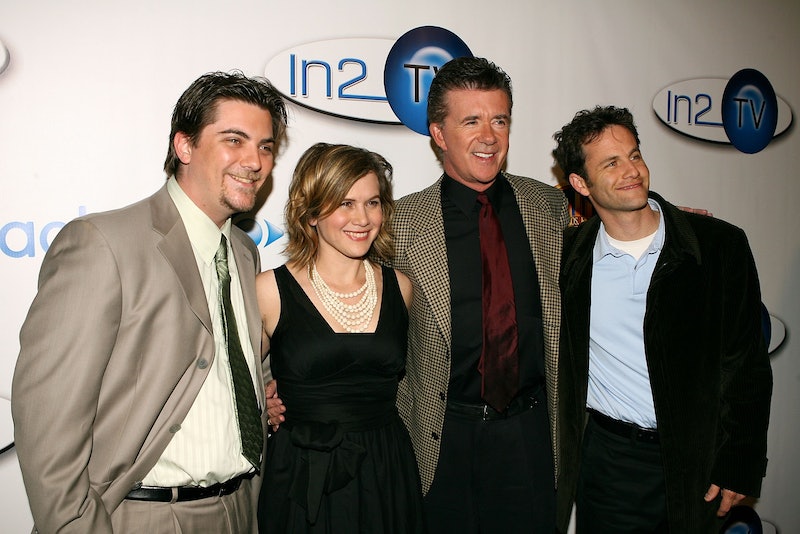 In news that sent the entertainment world and fans reeling, actor Alan Thicke passed away on Dec. 13 from a heart attack he had playing a game of hockey with his youngest son, Carter. TMZ reported that Thicke suffered from chest pain that morning on the ice and was later taken to Providence St. Joseph's Medical Center in Burbank, California, where he was pronounced dead. This sobering news is a shock for fans of the iconic '80s family sitcom, Growing Pains, where Thicke spent seven years playing Dr. Jason Seaver. As one would expect, his TV family is rightfully grieving and the Growing Pains cast are slowly reacting to the saddening news of losing one of their friends and costars.

Because the news is still so fresh, I imagine that his longtime friends and cast mates will need some time to heal from the initial shock. Even actors that spent a small amount of time on set with him are mourning (for example, This Is Us star Justin Hartley shared a photo of Thicke of the time he guest starred on the show), showing that Thicke was a man who was loved and respected by many in the business.

The cast of Growing Pains worked together for seven years and their loss is unimaginable. Here is the actors who have spoken out so far have shared their grief. (We will update as more cast reactions come in.)

In a reply to actor Daniel Franzese, Kerns, who played the Seaver matriarch, shared her words on Thicke's death.

That's all she needs to say.

Most of us had our first introduction to baby-faced Leo when the Seaver's brought the homeless Luke Brower in as family, which is what seemed to happened off-screen, as well.

As evidenced, Thicke was a well-loved man and actor who will be greatly missed by fans and his television family. R.I.P.

More like this
Josh Peck Shows Love To Jennette McCurdy After Her Shocking 'iCarly' Revelations
By Radhika Menon
Lisa Kudrow Explained How Her Body Image Changed While Filming 'Friends'
By Grace Wehniainen
Miranda Cosgrove Reacts To Jennette McCurdy’s Shocking ‘iCarly’ Revelations
By Grace Wehniainen
In Rap Sh!t, Social Media Has Main Character Energy
By Aramide Tinubu
Get Even More From Bustle — Sign Up For The Newsletter