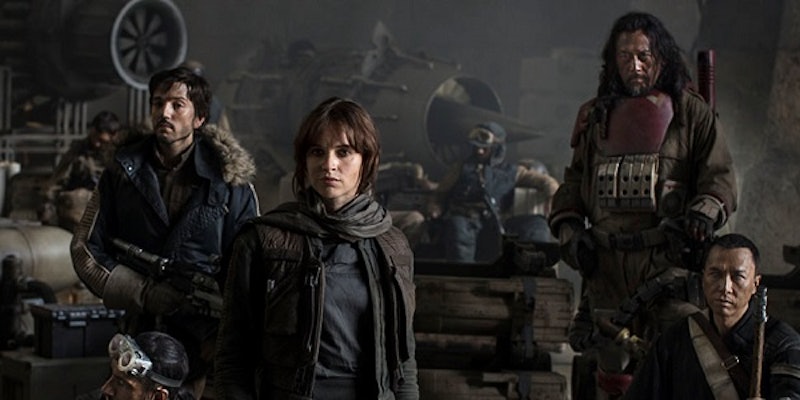 Knowing that the plot of Rogue One: A Star Wars story revolves around the band of rebels stealing the plans to the Death Star, it's only fair to assume that the end of the movie might line up with the beginning of the original, much beloved Star Wars Episode IV: A New Hope. And we all know that it was Princess Leia whose actions set the course in motion for the events of the film to take place, so it's totally possible, or even probable that Leia would make an appearance in the new film. And — major spoiler alert! — that's exactly what happens. Young Princess Leia appears in Rogue One , and her cameo is incredibly inspiring.

In Episode IV's opening, one of the Empire's enormous Destroyer ships has tracked down Princess Leia's much smaller one, the Tantive IV, which was supposedly on a diplomatic mission to Alderaan. As the original movie opens, we catch a glimpse of Leia bending down to R2-D2, placing the stolen Death Star plans inside after having just recorded her secret message to Obi-Wan Kenobi. Rogue One gets pretty close to this moment, as Princess Leia not only appears in Rogue One getting the plans delivered to her, but her face, and a very 1977 looking one at that, is the very last image we see in the film.

After an epic battle and a rush to get the stolen Death Star plans from one place to the next to the next, they are finally hand delivered to Princess Leia herself. A fellow rebel asks her what she's been handed and Leia, looking the same age as she did in Episode IV, utters the last line of the film: "Hope." It's a nice nod to the title of the next chronological film, A New Hope, but how'd they do it? How did Rogue One incorporate the face of young Princess Leia when the marvelous actor who plays her, Carrie Fisher, is now almost 40 years older than she was when they made the first Star Wars film?

The answer is probably a combination of CGI and Fisher's participation. There aren't many details out there about how LucasFilm recreated Leia's young look, but there have been reports about the recreation of another character: Grand Moff Tarkin, as played by Peter Cushing, who passed away in 1994. As a source claimed to The Daily Mail back in August of 2015 that filmmakers allegedly used CGI to recreate the likeness of the famous villain. "This is one of the most complex and costly CGI re-creations ever. Cushing is a pivotal plot line," the source claimed to the Mail. Since Fisher is alive, though, Leia's recreation might not have been the massive undertaking that Cushing's was. Perhaps she helped out a bit with facial recognition software, or motion capture work for the new, brief scene. There is a special thank you devoted to Fisher in Rogue One's closing credits, so it's definitely possible she helped out somehow.

However it happened, it was incredibly inspiring to see Princess Leia as the last image of Rogue One. As the second film in the franchise after The Force Awakens to be led by a female character, Rogue One has a definite female centricity to it. Leia's closing moment is a great reminder that women have always been major players in the world of Star Wars, even before they were protagonists. They've been rebel spies, fearless leaders, brave warriors, and cunning politicians. It's pretty awesome that Rogue One is essentially an action-packed war movie led by a woman taking the reins, which ends with a woman whose brave actions initially began the series.