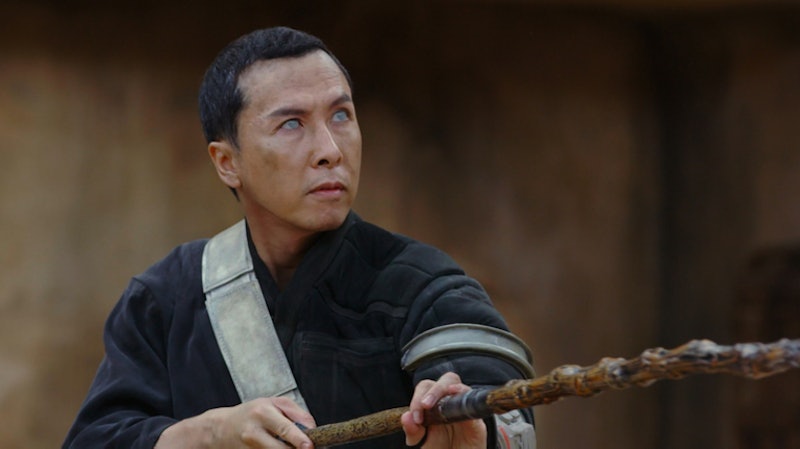 With the Star Wars sequel trilogy in full swing, and a series of side anthology films accompanying them, there are a whole slew of new characters in the Star Wars universe to get to know. Rogue One: A Star Wars Story follows the band of rebels who steal the plans to the Death Star alluded to in the opening scrawl of Episode IV. Led by Jyn Erso (Felicity Jones), the rag tag group includes Empire defectors, Rebel Alliance members, criminals, pilots, and a few randos picked up along the way. One of them is the amazingly awesome Chirrut Imwe. Spoilers ahead! This character is shown to be super strong with the Force, but is Chirrut a Jedi? Rogue One certainly makes that a real possibility.

As played by Donnie Yen, Chirrut is a human, blind from birth, who lives in Jedha City, a holy place for the Jedi, on the moon of Jedha. He seems like a wise, old preacher at first, spouting the ways of the Force, but when confronted with danger Chirrut quickly reveals himself to be a strong, skilled fighter, even though he can't see anything that he's fighting. He also has the ability to feel presences, and is acutely aware of the essences of people and things around him. Technically, though, he's not an actual Jedi.

At the end of Revenge of the Sith, the Jedi were all but wiped out. At the point in the Star Wars timeline that Rogue One takes place, Obi-Wan Kenobi has gone into hiding, and the Jedi are but a legendary religious order that no one has really heard much about in years. Chirrut himself is not an actual Jedi, but a follower of their beliefs. "Chirrut falls into the category of being a warrior monk," producer Kathleen Kennedy told Entertainment Weekly . "He very much still believes in everything the Jedi were about." That's evident from his mantra, "I am with the Force and the Force is with me," which he repeats often throughout the film to the point where it becomes a sort of unconscious prayer, allowing him to have full use of his senses and makes his blindness a non-issue.

And just because Chirrut isn't a Jedi, that doesn't mean he's not a complete badass character in Rogue One. I'm telling you, this dude is awesome. He marches through a horde of Stormtroopers shooting their blasters and deflects every shot with his cool, magical walking stick. He can sense when someone is about to kill. And he shoots a freaking Tie Fighter out of the sky with a bazooka-like weapon without even being able to see it. So no, Chirrut isn't a Jedi, but he might as well be. We know that, in the Star Wars universe, people can be super strong with the Force and still not be Jedi (Ahsoka Tano for example), but at this point in the timeline, the Jedi are few. Still, seeing another character in the franchise able to wield Force powers make Rogue One all the more fun and magical, and yes, a bit more badass.