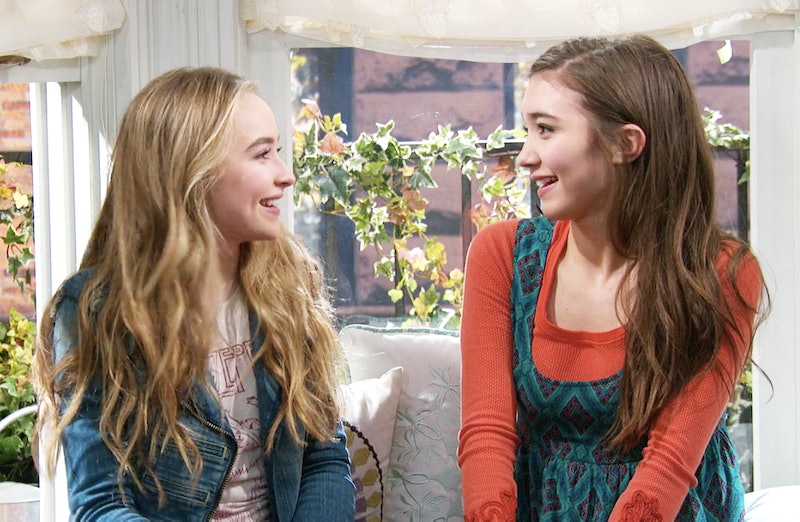 Many of the people who first tuned in to Girl Meets World did so mainly to see where their favorite Boy Meets World characters were today. Many of those who stuck with the show through its three seasons did so because of the friendship between Riley Matthews and Maya Hart. The two female leads of the program are the ones through whose eyes audiences are either learning to navigate their confusing adolescence or being reminded of their confusing adolescence. And, during an interview with Bustle on the iHeartRadio Jingle Ball 2016 red carpet, Sabrina Carpenter, who plays Maya, describes her character's friendship with Riley as the cornerstone of the show. "I think that’s the best thing about the show is [that], no matter what, we’ve always stuck to the friendship of the two girls, how important that is, and how much it gets them through in their lives..." she says. "There’s so much women empowerment in our show."

She's not wrong. Thanks to those two young girls, and their flawed, fabulous, strong mothers Topanga Matthews and Katy Hart, Girl Meets World quietly became one of the most feminist shows on television. Whether they're dealing with things like having a crush on the same guy or bullying, or even heavier topics like abandonment issues and inferiority complexes, through it all, Riley and Maya have each other. In fact, the pilot episode of Girl Meets World shows Maya trying to distance herself from Riley to avoid being a bad influence on her, only to have Riley drag Maya before her parents and announce, in no uncertain terms, that this girl was her best friend. And, come hell or high water, that would never change.

No matter the fight or disagreement, in three seasons, it hasn't.

“It’s so funny because all our writers — we do have a few girl writers — but they’re [mostly] men," Carpenter continues. "And they’re just so, so supportive of everything that we do. [In] writing for our characters and writing for them as young women in this world growing up, I think they really do the show justice." The actor would know. Though she's currently 17 years old, at the time that she was cast in the show, she was only 13. Carpenter has been growing up as her character does, and she's had a lot of influence in how her character is crafted. According to her, "[The writers] give us so much freedom to add storylines, especially that are personal to us that happen in real kids our age’s life. So we had the privilege of doing that."

Boy Meets World was a show that was very of-its-time while also providing us with lasting lessons that are still relevant to the lives of children today. Sure, we may scoff at the layered, grunge look that Cory and Shawn sported all throughout the first season of the show (yes, teens and pre-teens really dressed like that in the late '80s and early '90s), but we can't deny that things like teen drinking, finding your place in the world, and striking the right balance between taking risks and being reckless are always relevant.

Girl Meets World adapts and updates many of those same lessons for the next generation, perhaps toned down in many respects due to the fact that it's airing on the Disney Channel rather than ABC, but not shying away from things like the psychological effects of parental abandonment or the larger questions of who we are, who we trust, and what we believe in.

"We had these past three years to experiment and to fail because that’s what this age is all about," says Carpenter. "It’s all about literally learning from your mistakes. To be doing that while growing up on a set with people that are seasoned actors that have done it before us gave us so much freedom to learn."

Currently, the fate of Girl Meets World Season 4 seems to be up in the air, though the final three episodes of Season 3 are slated to air in 2017. During her downtime, Carpenter has released her second album, EVOLution, sold out her first tour, the EVOLution Tour, and rocked the 2017 Jingle Ball stage. She's also made it clear that, despite rumors to the contrary, her friendship with Riley Matthews actor Rowan Blanchard is just as strong off-camera as their chemistry makes it seem on camera. Blanchard, an outspoken feminist, and Carpenter seem to be aware of, and humbled by, how their fans look up to them and bear the responsibility of that with a maturity far beyond their respective ages. So, it's not just Riley and Maya that fans can admire and emulate.

If Girl Meets World ends with the Season 3 finale "Girl Meets Goodbye," then the world will lose one hell of a show in terms of empowerment, feminism, and life lessons. But what Girl Meets World has tried to do, and has actually done, for its viewers in three short seasons will resonate forever.