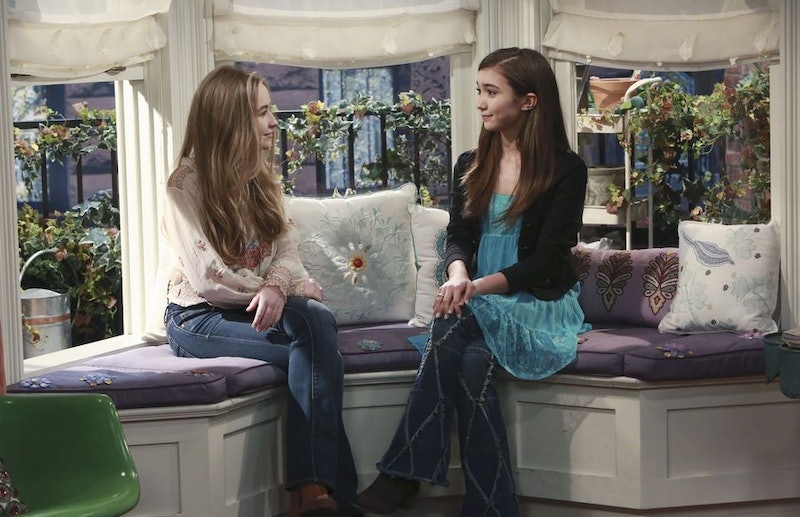 Feminist television comes in all different shapes and sizes, from the issues-oriented Call the Midwife to the fierce Jessica Jones — but finding true feminist storytelling in children's television is a rarity. And, finding feminist storytelling on par to what Girl Meets World is doing? It is almost unheard of. Through the relationship between Maya and Riley, Girl Meets World has quietly become a feminist show everyone should be watching.

Right from the start, the series put its focus squarely on Maya and Riley. These two young women who come from different backgrounds, but found sisters in each other are the show's greatest strength. Riley is a romantic with a big heart, at once traditionally feminine and a crusader for social justice. Maya is darker, her life has been harder, but she finds her own strength in her faith in her friends and her art. Together they have proven to be an unstoppable team and one of the most positive representations of female friendship to ever hit the small screen.

When Season 2 introduced the idea that both Maya and Riley had crushes on Lucas, it almost felt inevitable that Girl Meets World would fall into the trap of having its two female leads fighting over a boy. The triangle followed the show straight through to Season 3 as the trio refused to make a choice because someone would inevitably get hurt. It was an interesting, if frustrating, stance for the show to take as it left the characters in limbo. However, the ultimate payoff made the journey worth it.

In what may be a television first, a love triangle was resolved without a single broken heart, and the non-romantic love story was valued above all else. When it came down to it, Riley and Lucas decided to try being boyfriend and girlfriend, but later in her room with Maya, Riley acknowledged a simple, but profound truth: the one extraordinary relationship in her life is the one she has with Maya. Nothing could ever change that, not a boy and not an identity crisis — nothing.

The moment was a summation of everything Girl Meets World does so well. The show has tackled bullying, insecurities, the way girls can be pushed aside in STEM subjects, and being a young woman on the autism spectrum. In three seasons, Girl Meets World has carved out a safe space for young girls, one where friendship is more important than romance, and where female role models of all ages, shapes, sizes, and races are there to guide the younger generation.

Girl Meets World has been unwavering in its earnest desire to depict young women growing up in an honest way. Way back in Season 1, the show did an episode on cultural appropriation, a subject television almost never broaches. Since then, Riley has learned so much more about the world and has repeatedly acknowledged her own privilege.

As for Maya, she has been allowed to lose herself in her best friend and come out on the other side more confident in who she is than ever before. The themes of self-discovery and self forgiveness have been key to Maya's story, and her journey has no doubt resonated with teenagers who are struggling to figure out their place in the world. Maya's imperfections and her intense loyalty are richly drawn in a way that makes it impossible not to relate to her.

Then there is Topanga, a feminist character who was an inspiration to anyone who watched Boy Meets World. She has lost nothing in her transition into a working mother. If anything, Topanga's wisdom, sense of justice, and strength has only grown. She is always there to give Riley and Maya a subtle push in the right direction as they stumble their way toward adulthood, and she's a reminder of the feminist roots from which Girl Meets World sprang.

Again, the show has always been a feminist story, but the older Riley and Maya get, the more interested Girl Meets World is in exploring feminism with all its many facets. The resolution of the triangle was a reminder of just how important Girl Meets World is, and how it is creating its own legacy independent of Boy Meets World. This is Riley and Maya's story, and it is one about the unstoppable strength of young women when they love and support each other, especially when society expects them to tear each other down.

There is power in defying expectations, and Girl Meets World defies them at every single turn.