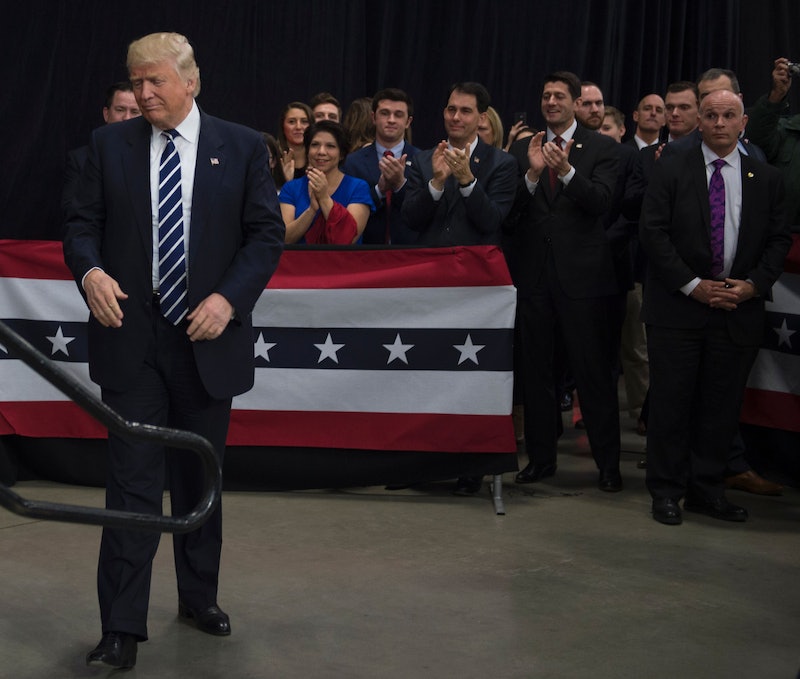 Donald Trump won the presidency while losing the popular vote by a bigger margin than any president has since 1876. But as we all know, the presidency isn't chosen by the popular vote, but by the electoral votes of each state. So despite lacking the support of a plurality of American voters, Trump will become president on Jan. 20, with all of the powers of the office legitimately his to wield.

Polls about the incoming president suggest that most of the people who did not warm up to Trump before the election (which was most of America) still aren't now. A Fox News Poll released Wednesday found just 47 percent of Americans have a favorable view of the new president, compared to 51 who have an unfavorable one. Just 44 percent approve of his cabinet, compared to 46 percent who disapprove. Though he's polling much better than he did during the election, he is still historically unpopular by the standards of recent incoming presidents — Obama's favorability in December 2008 was 68 percent in the same poll, and Americans approved of his cabinet choices by 60-32 in a February 2009 poll by Fox News. This comparison seems to hold true in other polls as well:

But, of course, Trump is president, whether Americans like it or not. Why does it matter what these polls show?

Trump promises some seriously controversial policies that he will need Congress's help to enact. His proposals on, for instance, deporting millions of undocumented immigrants, cutting taxes on the rich, repealing Obamacare, and cutting federal regulations fighting climate change, are unpopular with many Americans. And while Trump doesn't have to run for reelection on policies like those until 2020, every member of the House of Representatives will have to in 2018.

This is made even more difficult by the political trends that usually come into play during midterm elections. The party in the White House has lost seats during midterms every time in the past century except 1934, 1998, and 2002 (which all had outlier factors to the political landscape — the Great Depression, a failed attempt to impeach Bill Clinton, and the post-9/11 renewed patriotism, respectively). That trend is highly related to the popularity of the president. If the president is unpopular, his or her party can take massive losses.

There's actually a lot of daylight between Trump and his party on numerous issues. You can especially see it in the way Congressional Republicans are bucking the incoming president on the issue of Russian hacking. For Trump to get anything in Congress done, he's got to convince the rest of his party that they'll be more likely to get reelected if they go with him than if they go against him. That only works if he's popular.

For the moment, Trump is pretty popular among Republicans — his unpopularity comes from nearly all Democrats continuing to hate him, even as his own party has rallied to nearly normal levels. But if the unpopularity he has overall stops him from accomplishing much, he'll probably become even more disliked, setting off a vicious cycle. President Obama, like many presidents, was most popular when he first became president, with his approval rating quickly fading. Trump has quite an uphill climb ahead, and Republicans may be walking into a 2018 threshing floor.