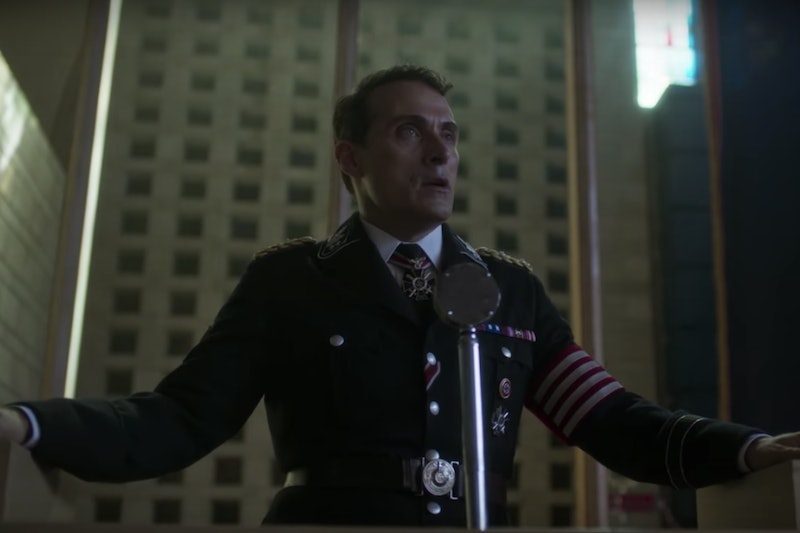 There is a hell of a lot of story to be told through Amazon's provocative series The Man in the High Castle . The Emmy-award winning show gives audiences a chilling view of 1962 America where Allied Powers lost WWII. Although the series is inspired by Philip K. Dick's 1963 novel of the same name, there are one million directions the TV series could go. Between the intricate plot of complex circumstances, a plethora of intertwined characters, and the possibility of modern-day infusion, nothing is off-limits. Although the cast and producers are celebrating the second season premiere of the series on Friday, December 16th, I sit down with them to see what the likelihood is of a third season. After this riveting second season, I'm certain fans will be ready for more.

Season 2 is nothing short of an intense emotional rollercoaster. The series continues to follow Juliana Crain (Alexa Davalos), Joe Blake (Luke Kleintank), Frank Frink (Rupert Evans), and more as they fight for their truth and destiny amongst the chaos. The Man in the High Castle is revealed and the story goes overseas. Plus, the mysterious tapes depicting a resistance movement (tied to the Man in the High Castle) are a vehicle in peeling back more layers of the story — namely the Man and Hitler's personal motives. Like I said: rollercoaster. According to producer Isa Hackett, the cast and crew are hopeful about the continuation of the ride.

"Yes, we’re very much hoping there will be Season 3," Hackett says enthusiastically. The show's star Kleintank is optimistic as well. "Third season’s looking pretty good," the actor says. Although they anxiously await for series renewal, it seems they'll cross that bridge when they get there in terms of figuring out next steps. "We haven’t even begun getting into what that might look like, obviously, we have to get the green light," Hackett explains. As a whole, cast members express that they're definitely game to continue being part of the show.

For the time being, the second season has plenty of surprises in store. Of course, there's the huge sigh of relief (and more questions) to come with the Man in the High Castle 's big reveal, which Davalos says is "something to react to on an incredibly-positive level." The plot is also going beyond domestic borders, which Kleintank says will be a surprise for fans. "We’re showing more of the world and slowly putting in pieces of that," the actor explains. "I’m surprised and intrigued to see how all that just opens up a whole new Pandora’s box."

Although the series isn't a commentary on the current state of the world, you never know if it will be influenced by recent affairs in the future. Producer David W. Zucker says the modern "global movement" of resistance is reflected in season two as the show goes overseas. Actor Joel de la Fuente (Chief Inspector Takeshi Kido) also explores the possibility of modern-day infusion in future seasons. "We’re all being influenced by the world we live in today. That all factors into a writer’s room, into collaboration. Art does meet real life at some point," he says.

In the meantime, cast members think about how their character's storylines would ideally play out. Kleintank keeps it simple. "Not to die," he says. Bella Heathcote, who joins this season as Joe Blake's love interest, hopes for change and liberation. "I’d want my character to find a way to be a feminist under the regime," she says. "Try and change the regime from within, that would be a great way to go."

Like fans, star Cary-Hiroyuki Tagawa (Nobusuke Tagomi) sums it up perfectly, and hopes the characters will ultimately find truth and unity. "Tell the truth, be responsible, it’s OK… If we put the best of what the east is and best of what the west is, we’re unstoppable," the actor says.

Needless to say, the possibilities for MITHC 's extension beyond season two are limitless, and hopefully the TV gods are listening.