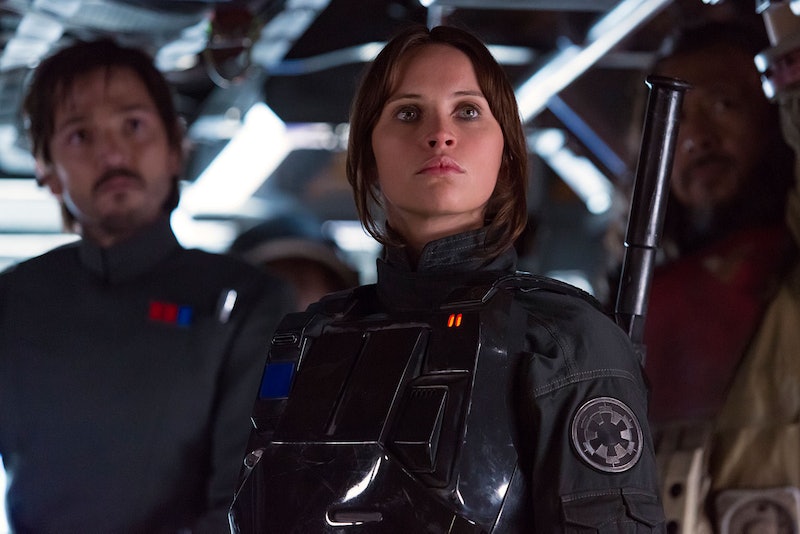 As the first Star Wars anthology film, Rogue One: A Star Wars Story was always planned as a standalone film. Technically a prequel to Episode IV — A New Hope, Rogue One already has a sequel, so, unless Disney wanted to make another prequel to a prequel, the odds of another Rogue One film were always slim. Granted, there were options, namely following the adventures of the Rogue One crew during the original trilogy, something that could only be done with at least a few surviving members. So before you ask about a potential sequel, you have to ask this question first: How does Rogue One end? Spoilers ahead, obviously.

For a movie all about finding hope in dark times, Rogue One doesn't really have a hopeful ending, at least not for our main crew. Every single member of the Rogue One crew dies at the end of the film. No one survives, not even Jyn Erso, the movie's heroine, or Cassian Andor, the Rebel Captain. Every member of the team — Jyn, Cassian, K-2SO, Chirrut Îmwe, Baze Malbus, and Bodhi Rook — sacrifices themselves in the Battle on Scarif after infiltrating the Empire's base to steal the plans to the Death Star.

Rogue One is arguably the most tragic movie in the Star Wars franchise, introducing us to heroes only to have them all perish in the end. But, it's also one of the most realistic. Rogue One is a story about soldiers, not saviors. It's not a continuation of a myth, it's a war. There are no Jedis, and save for Chirrut's sense of the Force, the rebels are just regular, human soldiers accompanied by one hilarious reprogramed droid. They go to Scarif to steal the Death Star plans knowing full well they might not succeed at all, let alone make it out alive. And, while it was always known that they would steal the Death Star plans (to lead into A New Hope), their survival was never guaranteed.

The ending of Rogue One , tragic as it is, is also pretty damn awesome. After the group splits up to begin infiltrating the Imperial base, they soon realize they all have a crucial role to play in the stealing of the plans to the Death Star, and as they complete their tasks one by one, they fall. Every character gets their heroic moment, and every character has a death scene, allowing viewers to complete their journey with them. It's bittersweet, yet satisfying and hopeful because they each die doing something that matters to them and that we know, thanks to the original trilogy, is essential to bringing down the Empire.

It's sad knowing we won't see the characters of Rogue One again in future films (unless Jyn wants to make a cameo in the upcoming Han Solo movie), but it's also kind of perfect because it lets Rogue One be whole all on its own.