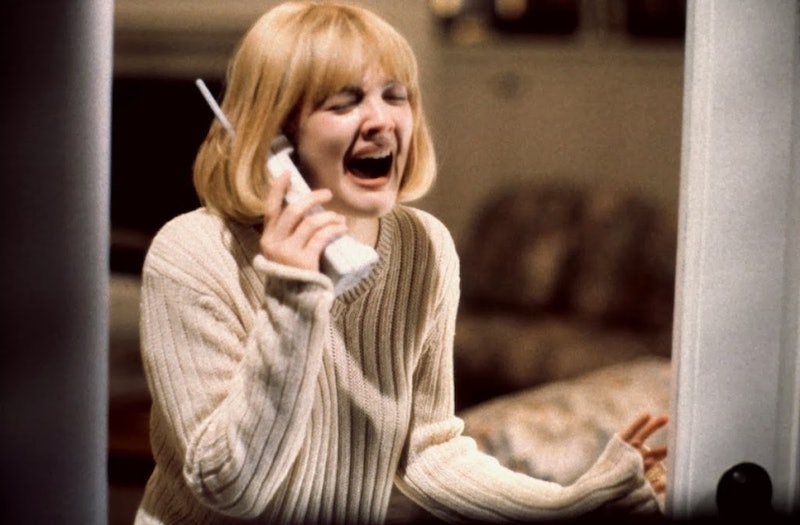 On Dec. 20, Scream celebrates its' 20th anniversary. If you are within a certain age range, then that fact is probably blowing your mind right now. To think, we first met Sidney Prescott a whole two decades ago. How many horror/slasher movies have tried (and failed) to capture that same kind of magic? The late, great Wes Craven's slasher flick recipe is nearly impossible to duplicate because it calls for some serious tension, a little dark humor, a lot of self awareness and a dash of an unknown flair that only he could bring to the table. To prove this point, look no further than the opening sequence of the first Scream film in 1996. The original Scream 's opening sequence is by far, the most terrifying scene ever.

It could be argued that a horror film's opening scene is the most important portion of the movie. Besides the ending, It is the moment that truly sets the tone and communicates what kind of scare you will be getting. If you don't draw audiences in right away, then they might never really connect with the rest of the film. Well, Scream draws fans in from the very first second that the legendary Drew Barrymore picks up that phone and after a full 12 minutes and 55 seconds (Yes, I timed it) of gut-wrenching stress, tension and horror, it leaves you feeling legitimately scared. Isn't that what horror movies are all about?

Here is a beat by beat analysis of that iconic opening scene, where we will deconstruct why it is so damn terrifying.

So, I know you are probably thinking that her lipstick is not scary at all and you are correct in that thought. I am referring to the terrifying fact that I can't ever find what shade of '90s matte perfection that she is wearing and that will haunt me for the rest of my days. Moving on.

That. Guy's. Voice. Though.

There is something so creepy about it. When he calls for a second time and says that he just called "to talk", I want to take a shower immediately. It sends a seriously disturbing signal that Casey (Drew Barrymore's character) should have recognized pretty clearly from the jump.

After Casey hangs up on that creep-bag, the camera pans out to a shot of her house. The house is gorgeous but huge, secluded and has a rickety, old swing that looks like it is straight out of hell hanging from a tree outside.

She Is Making Jiffy Pop

Why is she making popcorn on the stove? Girl, throw a bag in the microwave for like 2 minutes and you can avoid fires and any kind of extraneous work.

She Is Still Conversing With This Guy

The creepy guy calls again and Casey engages in some serious flirtation. I strongly advise against willingly spoon-feeding any information to a complete stranger who keeps calling your house Casey, make your popcorn and let it roll to the answering machine that you have with a cassette tape in it.

She Is Just Now Locking The Doors

I am a 30 year-old woman and I still lock every window and door in my house if I am alone. When I was a teenager left alone in the house, I locked the door the moment my parents stepped out of it. When Casey walks by the glass doors while on the phone with this creep and casually clicks the lock, it signaled a bad omen for anyone paying attention. That door was unlocked for far too long.

Casey- "Why do you want to know my name?"

Ghostface- "Because, I want to know who I'm looking at."

I can't. That is one of the most chilling lines in all of horror. Imagine for one second that some stranger on the phone says that to you. Are you peeing your pants? You should be peeing your pants.

He Is Mad Now

Honestly, this is just getting worse and worse. It is time to call someone. Call anyone. Just stop talking to this creep.

She Keeps Answering The Phone

Girl, stop answering the phone. When he calls again, he is pissed that she hung up on him and I am weeping softly to myself.

He is Officially Angry

When he calls for the fourth time in a row and Casey answered with, "Listen, asshole!" I was psyched and cheered for all of her strength and ability to stand up for herself. Then I stopped cheering because I realized that she had answered the damn phone again. Of course, I started to weep again (I told you, it's a lot) when he responded with one of the most visceral threats I have ever heard.

Ghostface- "No you listen, you little bitch. Hang up on me again and I'll gut you like a fish, understand?"

Casey- "Is this some kind of joke?"

Ghostface- "More of a game, really. Can you handle that? Blondie?

So, here we have the second shred of evidence that suggests that he can see her as he speaks to her. That is probably one of the realest nightmares that we can all imagine. You are home alone, in a secluded house and someone is watching you. Wes Craven knows what my legitimate fears are and he has committed them to film.

She Is Still Locking Doors

Seriously?! Why were all of these doors open, Casey?! Why?! She runs to lock the front door now and he straight up asks her, "Can ya see me?" Of course, she can't see him because he is clearly already in her house that she kept wide open all night, up until this point. The killer is in your house, girl!

Another Exchange That Will Ruin Your Life

Casey- "I am two second away from calling the police."

Ghostface- "They'd never make it in time. We're out in the middle of nowhere."

He Was In Our Heads

Scream was known for being very meta and very self aware. The characters knew all of the horror movie cliches but they still found themselves falling into them time and time again. When the doorbell rings, Casey says, "Who's there?" As audience members, we were all screaming at her for that classic misstep and when the killer immediately echoes our distain, it suddenly feels like we are more than casual observers for a second. A very uncomfortable moment.

"You should never say 'who's there', don't you watch scary movies? It's a death wish. You might as well just come out here to investigate a strange noise or something."

"I lied! I do have a boyfriend! He's big and he plays football and he'll kick the shit out of you!"

Things get bleak when Steve, her big, football player boyfriend is revealed to be beaten and tied to a chair outside. It becomes pretty clear that this isn't a joke and that this person (or people) are seriously messed up.

When Ghostface reveals the game, it was iconic. Nothing like this had been seen in a horror movie. The idea that a killer uses technology to contact his victims and play a twisted trivia game with them was not commonplace in 1996. This made it terrifying. Seeing Casey crouched behind her television, pulling the light cords out of the sockets to try and hide was and still is very chilling.

When Casey Gets It Wrong

Raise your hand if you too would have answered "Jason" when Ghostface said to name the killer in Friday The 13th. Yeah, we all would have answered that wrong and we all would have been responsible for our boyfriend's stomachs being ripped out. As a result of her wrong answer, Steve is killed and his intestines literally topple out of his ripped-open abdomen. It is still one of the most disturbing images I can conjure in my brain.

Side note: Steve is wearing a letterman's jacket, those '90s dude jeans and big sneakers. It is downright nightmarish.

"Final question: What door am I at?"

The Jiffy Pop caught fire. Not only is there a psychotic killer chasing her, but now her popcorn is on fire and there is smoke billowing throughout the house. The abundance of stimulation makes everything 10x more stressful to watch.

The First Glimpse Of Ghostface

Casey finally makes her way outside after seeing a knife-wielding shadow run by her hallway (the worst) and we see that a car (presumably her parents) is driving towards her house. I specifically remember screaming when she looks back at the window and our first full image of Ghostface is staring right back at her. This was an epic jump-scare that not only made you scream but introduced the movie's big bad (and that iconic mask) in one shot.

Ghostface crashes through the window and Casey takes off running. Chase scenes are key for slasher flicks because nothing is scarier. Don't believe me? Try running up your stairs when someone (even a pupp) is playfully chasing you. Unfortunately, Casey gets caught pretty quick and Ghostface plunges a knife right into her chest.

Maybe this is 30 year-old new mom Alaina speaking, but watching her parents arrive home, commenting on the flowers that need watering as their child is being brutally stabbed mere feet away from them was a whole new experience of horror. Casey repeatedly gasps for help but having just been throttled, she can't scream for them. Mind you, she still has that giant '90s cordless phone in her hand (and it is still on), so I remember yelling at her to hum it at her parents to get their attention. Spoiler alert: She doesn't.

Just when you have had enough and the tension becomes a little too much, they bring it on home. Casey's parents walk into their smoke-filled house (curse you, Jiffy Pop!) that is now sans their daughter and they are immediately pretty concerned. Her mother picks up the phone to call the police and instead hears her child being brutally stabbed to death on the other end. She says, "Casey, baby??" and it is easily one of the most awful moments in the film. I still feel sick watching that one line.

Oh, you thought that was bad? Well, I hope you are hanging on to that last shred of humanity because we are at the grand crescendo. Casey's mom then walks out her front door to see her daughter hanging from that tree swing. You know, the one from hell that I mentioned earlier. Casey is completely gutted from head to toe and slightly swaying in the breeze (Forgive me, for I am painting with words). The scene ends with her mother screaming and falling to her knees.

And that folks, is the end of the opening scene to Scream. Thank you for taking this terrifying ride with me and there will be complimentary trauma counseling on your way out.

More like this
Hayden Panettiere Will Return For 'Scream 6': "We F*cking Won, Scream Fam"
By Jack Irvin and Jake Viswanath
Laura Dern Said “Cultural Awareness” Made Her Rethink This 'Jurassic Park' Fact
By Grace Wehniainen
The 'Hocus Pocus' Sequel Finally Has A Release Date & It Makes Total Sense
By Shannon Barbour and Radhika Menon
A 'Bridgerton' Star Just Dropped A Major Hint About Joining The Live-Action Barbie Cast
By Bustle UK
Get Even More From Bustle — Sign Up For The Newsletter