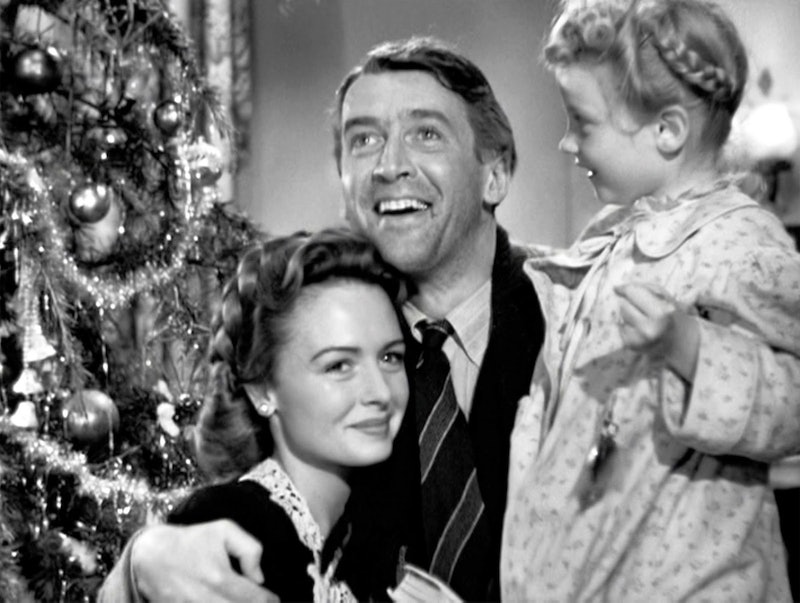 Isn't it weird to think that once upon a time, 70 years ago, in fact, the Christmas classic It's a Wonderful Life was a new movie, like any other new holiday movie? This one stars America's sweethearts of the era, Jimmy Stewart, and Donna Reed. When engaged in this Christmas classic, I begin to consider how much has changed since Frank Capra's movie first graced the silver screen on December 25, 1946. While I was rewatching the film, I couldn't help but think of how this classic would be so different if it were set in today's world. Rotary phones would be cell phones, for one. And yet, despite its obvious technological differences, at the same time, this classic has values and ideals that are relevant to any time or place.

Concepts of the value of life, caring for others over yourself, and being happy right where you are is something that is timeless and will always remain timeless. It's the sort of lesson that always applies, no matter who you are or where you call home. But that sappy stuff isn't what this article is about, so now I'm going into how It's a Wonderful Life would be different if it was set today. (Remember the rotary phones?) Let's dive in.

1. George Bailey Would Be Played By Neil Patrick Harris

NPH is the most likable person I could think of. And therefore the perfect contender to take over Jimmy Stewart's prolific role.

2. Mary Hatch Would Be Played By Gabrielle Union

Because it's 2017 (almost!), mixed race couples are commonplace, and Union is gorgeous and would totally have the right effect on George Bailey.

3. Clarence The Angel Would Be Played By Lin Manuel-Miranda

He's so hot these days. And of course, they'd have to throw a singing number in.

4. Mr. Potter Would Be Played By Meryl Streep

Gender-bending movie roles are so in right now. And Streep can take on any role and nail it. It's the perfect choice.

5. The Accents Would Be So Different

So many actors in old movies had that fake British accent thing going on. It's commonly called a "transatlantic" or "mid-Atlantic" accent and is associated strongly with actresses like Katherine Hepburn, though Donna Reed definitely rocks it in this movie as well. But in future versions, I'm sure we'd say goodbye to the transatlantic accent!

At the beginning of the film, a young George Bailey saves his brother from drowning/freezing in a frozen lake that cracks. These days, it's highly unlikely those boys would have even made it to a frozen lake to sled onto because you just know someone's mom would have called that kid's cell phone and she would have figured it all out and made sure they came immediately home. Kids just can't get away with stuff like that anymore.

7. Young George Bailey Wouldn't Be Employed At A Soda Shop

Child Labor Laws for the win.

8. That Wish Machine Wouldn't Be A Thing

What the heck is that thing? Where do I get one? The concept is if you make a wish and a flame goes up your wish will come true, but like...what in tarnation? Seriously.

9. The Pharmacy Soda Shop Would Either Be Vintage Or Something Else Completely

There's either going to be a sort of retro-we're-doing-this-because-its-hip-to-do-old-timey things vibes. Or, this place is going to change into an internet cafe.

10. Mr. Gower Would Not Be Smacking George

Today, the headlines would scream, "Drunk Pharmacist Beats Child, Lands One-Year Probation." Back then, if you were a kid, you were fair game for any smacks from adults, even undeserved ones.

11. There (Hopefully) Wouldn't Be So Much Harassment Towards The Bailey's Maid

Seriously? A live-in maid? What is this, 1946? Oh, it was? Carry on. Regardless, it's considered sexual assault when you lift someone's skirt up, Harry Bailey. Especially if they changed your diapers. And George, don't be so rude to the lady that makes your food.

12. Jimmy Stewart's Face Would Have Been CGI'd When He Played Younger Versions Of George Bailey

I think I prefer the makeup version of the 1940s, myself. CGI can be very off-putting.

13. The Dance Contest Would Be Another Dance Entirely

Right before old George is about to go to college (spoiler alert, he doesn't go) he goes to his brother's graduation dance where he meets his future wife, Mary. They participate in a dance contest of "The Charleston." Since people don't know this dance anymore (sadly) the contest would totally be something different. Break-dancing perhaps? I don't know what people do.

14. Mary Could Actually Have Called The Police

After the big dance and everybody falls into the pool under the dance floor (because that's a thing many dance floors have) George and Mary head home in ridiculous dry clothing George scraped together from the locker room, drunk in love. At one point, Mary's entire robe comes off because she gets caught on something and she runs and hides in a bush. George has a handle on the robe and toys with Mary in a bush, acting like he won't return her robe. She threatens to scream, to call the police. And yeah, it's all in jest and flirtation, but in today's world she probably would have had a cell phone on her and could have called the police. She probably wouldn't have because she's in L-O-V-E, but it's an interesting thought.

15. George Bailey Couldn't Work At The Bailey Building & Loan Without A College Degree

Handling people's money is serious business. I have a hard time believing that in this day in age, even with a family connection, someone could get into the loan business without getting a degree first. People take that higher education thing so seriously these days.

16. That Hat Game Wouldn't Be As On-Point

Can we please all start wearing hats whenever we're out of the house? Excessive hat game always made the earliest part of the 20th century seem so classy.

17. No One Would Be Calling Home Phones

When George and Mary are courting and he rolls up at her home (mostly drunk) to talk it out, Mary gets a phone call from another boy from Bedford Falls who's interested in her. If this movie was made today, George might still have come a-calling, but she definitely would have been texting, not phone calling, the other guy on the side.

"Can I come calling on you around 5 o'clock" is simply not a statement that is heard anymore. Methinks George and Mary's relationship would be a heck of a lot more complicated in this day and age.

19. Everyone Would Be Dealing With The Recession Not The Depression

Let's keep our American financial catastrophes straight and timely, shall we?

20. World War II Would Change To The War In Iraq

And while we're at it, let's keep our American conflicts straight, too.

21. George Would Be Complimenting Different Articles Of Clothing

George and the rest of his guy friends are always complimenting one of the girls in town, Violet, on her dresses saying things like "that's some dress you got there." These days there's a little more diversity in women's wear, so they'd probably be complimenting Violet on her rompers or something like that.

When Clarence the Angel shows George what the world would be like without him, they see a devastated Bedford Falls. Some of the absences make sense, but the most infuriating was what happens to Mary. Without a George Bailey in her life, Mary becomes an "old maid" working at the library even though she's only 30. In today's age, it would be pretty standard to not be married at 30. Meanwhile, I bet Mary would have a cool job at a cat cafe or something like that. Let's hear it for the old maids!

No matter what, he'd be just as lovable and town-oriented.

It's so odd to think of It's A Wonderful Life as a new movie, but once upon a time, it was. Now, it's a dated classic, but that doesn't take away from the magic. The main lesson of the film — that life is a gift — is timeless and something anyone from any time, place, or probably planet can relate to.