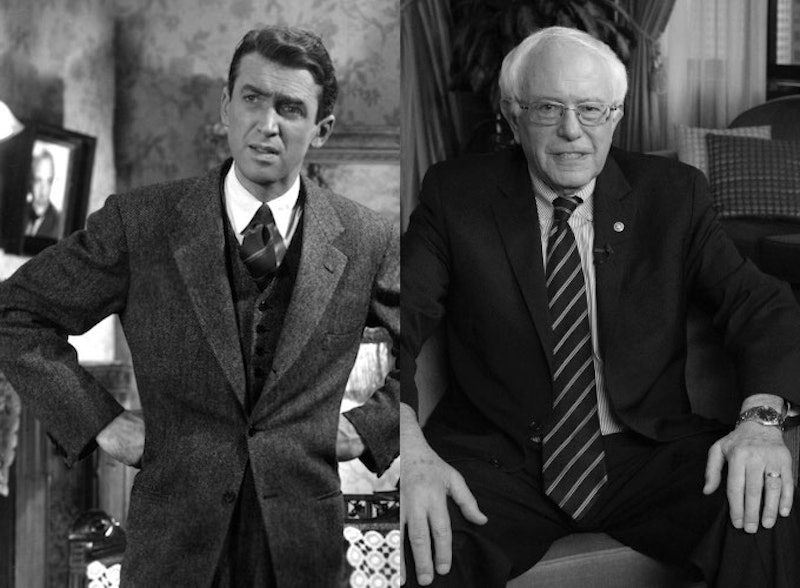 As I was reflecting on my favorite Christmas movie, I realized that the protagonist has many similarities to my favorite political candidate. Presidential hopeful Bernie Sanders and George Bailey from It's a Wonderful Life are eerily alike, from their home states to their views on economics. While I don't mean to turn the most iconic Christmas film into a political statement, I find George Bailey's generosity and support of those who are less fortunate than him to mirror the Vermont senator's platform. I think I can say with confidence that if George Bailey were alive today — and a real person — he'd be feeling the Bern.

As far as I can tell, Sanders doesn't have a guardian angel named Clarence showing him what the world would be like without him, and George never had to discuss national security or climate change, but that doesn't mean the men aren't strikingly similar. If you don't believe me, check out these two quotes about working-class people.

First, let's go to George Bailey's speech to his antagonist, the rich and powerful banker and landowner Mr. Potter, from It's a Wonderful Life:

What'd you say a minute ago? They had to wait and save their money before they even ought to think of a decent home. Wait? Wait for what? Until their children grow up and leave them? Until they're so old and broken down that they... Do you know how long it takes a working man to save $5,000? Just remember this, Mr. Potter, that this rabble you're talking about... they do most of the working and paying and living and dying in this community. Well, is it too much to have them work and pay and live and die in a couple of decent rooms and a bath?

Then, from Bernie Sanders at the third Democratic presidential debate:

Still not convinced that the hero of It's a Wonderful Life and the hero of the current political revolution aren't one and the same? Besides their excitable, passionate, and at-times angry natures, here are nine other traits that I think the fictional character and presidential candidate share.

1. They Care About Veterans

George Bailey couldn't serve in WWII because his hearing was damaged as a child and he is deaf in one ear, but his younger brother Harry served and was a war hero who received the Medal of Honor. The day he contemplated suicide, George was helping to commemorate Harry and welcome the veteran home from war. Sanders did not serve in the Vietnam War (he applied for conscientious objector status), but he is a supporter of veterans. He is currently a member of the Senate Veterans' Affairs Committee and often discusses the importance of providing health care to vets.

2. They Are From The State Of New York

Although Bedford Falls is a fictional town, the people of Seneca Falls, New York are convinced that Director Frank Capra used their town as inspiration since the film does take place in New York. Though from a much more urban location than George's hometown, as Sanders is from Brooklyn, the men do share a home state.

3. They Believe In Immigration Reform

OK, technically George never worked on immigration reform, but he did help his friend Giuseppe Martini, an immigrant from Italy, buy a home when Mr. Potter wouldn't. Martini then opened up a successful business as a bar owner. Sanders comes from immigrant parents and said at the third Democratic debate, "My father came to this country from Poland at the age of 17 without a nickel in his pocket, which sparked my interest in the need for immigration reform, because I know what it's like to be the son of an immigrant."

George wasn't a politician, but Sam Wainwright did say about him, "Good ole George, he's always making a speech." And Sanders has demonstrated what a verbose public speaker he is since back in the '80s when he had his own public access show as the mayor of Burlington, Vermont.

5. They Became Leaders At A Young Age

Both started their leadership roles at a young age; Sanders at the University of Chicago when he led a sit-in to protest housing segregation in 1962 at the age of 21 and George when he had to reluctantly take his father's position at the Building and Loan after giving an impassioned speech to Mr. Potter in front of the board in 1928. And based on the timeline of It's a Wonderful Life, where George is 12 in 1919, he was also 21 — the same age as Sanders — when he was first considered a leader in his town.

6. They Have The Same Number Of Children

George and Mary Bailey have four children — Pete, Janie, Tommy, and Zuzu (of the infamous petals). Sanders has only one biological child, Levi Sanders, but considers the three children of his second (and current) wife, Jane O'Meara Sanders, to be his own, and his official website says, "He has four children and seven grandchildren."

7. They Have Been Accused Of Being Communists

George Bailey himself wasn't accused of being a communist, but It's a Wonderful Life was considered communist propaganda by the FBI in 1947. According to the original FBI document, the film "deliberately maligned the upper class, attempting to show the people who had money were mean and despicable characters." The accusation of being communist is something the democratic socialist Sanders is more than familiar with. Other presidential hopeful Donald Trump said in a speech about the billionaire-bashing Sanders, "I call him a socialist-slash-communist because that's what he is."

8. They Care Where Their Money Comes From

Rather than accept money from millionaires and billionaires, Bailey and Sanders accept donations of small sums from many people. George declined a lucrative job offer from Mr. Potter because they didn't share the same values and thus, chose a modest life. So when Mr. Potter took the $8,000 deposit from the Building and Loan that Uncle Billy misplaces, George's family and friends came through in the final scene of the film and each spare as much as they can — like George has done for them throughout the years. In his campaign for president, Sanders has not worked with a super PAC for fundraising, unlike his fellow Democratic candidates, and the footer at the bottom of his official website says, "Paid for by Bernie 2016 (not the billionaires)." Surely, George Bailey would approve of Bernie Sanders' stance on campaign finance reform.

9. They Have Been Spreading The Same Message For Decades

It's a Wonderful Life was released in 1946, so it will be celebrating its 70th anniversary in 2016 — the same year that Sanders could potentially become president. While Sanders hasn't been talking about income inequality since he was born in 1941, the 74-year-old has maintained the same, consistent message for over 40 years about how the working class has been struggling to get ahead due to the greed of the upper class, a message that is also delivered in people's homes every Christmas, thanks to It's a Wonderful Life.

Throughout the years, both Bernie Sanders and George Bailey have been helping people understand that everyone, not just the wealthy, deserve a fighting chance at Christmas and every other time of the year — and my life is more wonderful for having both of them in it.

More like this
Yes, That's Lindsay Lohan's Sister Singing In The 'Falling For Christmas' Movie
By Radhika Menon
Keke Palmer Paid Tribute To "Other Half" Darius Daulton After Announcing Pregnancy
By Jake Viswanath
'The Holiday' Director Just Addressed *Those* Sequel Rumours
By Sam Ramsden
5 Biggest Takeaways From Channel 4's 'Untold: Life After Love Island'
By Sophie McEvoy
Get Even More From Bustle — Sign Up For The Newsletter