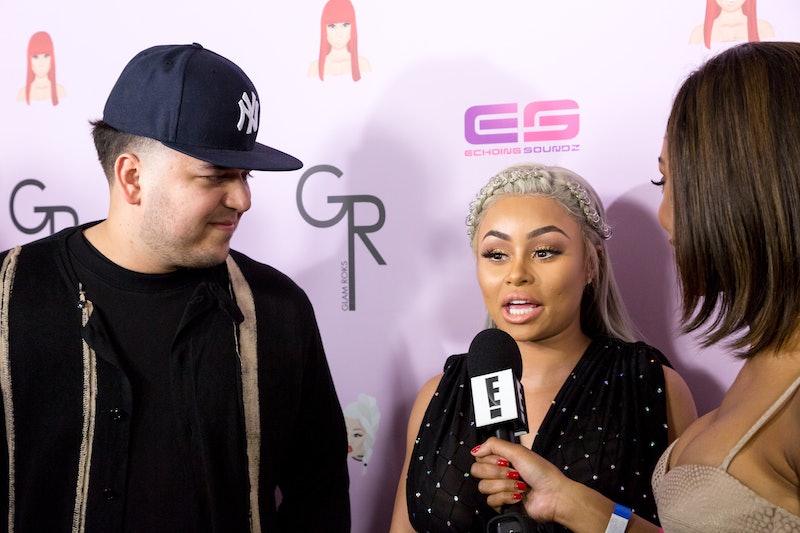 If you typically keep up with the Kardashians but stayed away from social media the last day or so, you may want to sit down for this. On Saturday night, Rob Kardashian took to Snapchat and Instagram, telling his followers that Blac Chyna allegedly left him. To make the situation even more dramatic, Chyna's Instagram seems to have been hacked earlier in the day, with the account uploading screenshots of conversations that were allegedly between Chyna and others to "expose" her real motivations for her relationship with Kardashian. But, is this all some kind of stunt, or has Blac Chyna really left Rob Kardashian for good? Bustle has reached out to both stars' reps for comment, but hasn't heard back at this time.

While Kardashian and Chyna have both made some grandiose breakup statements on social media before, I am not sure they've ever taken it this far. Case in point, on Saturday, Kardashian took fans on a Snapchat and Instagram tour of his now mostly empty house, claiming to his followers that Chyna left and took all of the kids' belongings with her. Not only does he pan to Dream's nursery with a solitary rocking chair and a few toys, but he goes into King's bare room as well.

Kardashian seemed more than aware that people might have some skepticism over the validity his statements that Chyna reportedly left him. In the caption of the video, Kardashian claims that this isn't "for ratings," saying,

I thought this was going to be the best year of my life ,,, had a beautiful baby Dream and haven't spent Christmas with family in years and I just can't believe she really hurt me this way. She knows how to hurt me and I loved her so hard like I'm supposed to. Like any man is supposed to love their Wife. Chyna knew exactly what she was doing to get me. I can't believe she did this to me. And this isn't for some ratings this is my real life so please understand I'm just being open right now. Cuz if it was for ratings I wouldn't explain all this here. And with Chyna's messages and her leaving with everything and the baby I am broken. I go 1000 percent for my girl. I am so confused how a man who gives and loves everything about a woman is the one left alone. 😓 I'm sorry for being so open once again ,,, this is killing me 💔

In another video, Kardashian is seen giving a confessional of sorts, while tearing up. He also posted several memes about his current situation, but said that he's very upset over the situation and taking it seriously.

If you're not willing to take Kardashian's word on it, though, maybe you'll take Chyna's. As ET Online points out, Chyna, too, discussed the alleged split, reportedly writing — and then, later, deleting — the following:

...It's Chy here I got my own!!! I was doing swell before I got with him! Rob asked for all of this! Rob begged me to have Dream! He stressed me out my ENTIRE PREGNANCY!!! Accusing me of cheating, going crazy on me with massive text blast daily! being an absolute lunatic and then cover it up with gifts! I was verbally abused every other day. I was still there with nothing but high hopes for us! ...We weren't together in that house two whole weeks before he starting calling me all types of bitches & hoes! AND I NEVER NOT ONCE CHEATED ON ROB! EVER! Those Messages OLD AF! He only did this because when he went through my phone he couldn't find anything to be mad about!

She allegedly continued on, addressing all of the accusations against her and providing further insight into the drama, saying,

...He's on snapchat acting hurt but he's yet to come see Dream yet! He knows where we are! Everyone has tried to help Rob. I've gone beyond to help and so has his family! I'm done with the situation until he gets help. I have no longer have time to feed into Robert's shenanigans I have 2 children and myself to fend for. What hurts the most is watching him do this to me knowing my last situation and promising to never put me through it. Especially after our child is only 1 month.

Regardless of which person you're willing to believe, one thing is clear — whatever is happening between Chyna and Rob, it's a sad situation for all involved.