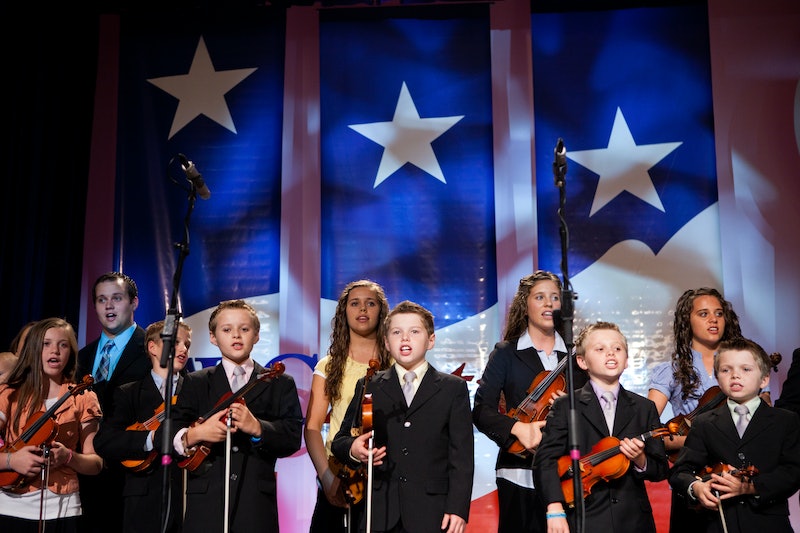 The oldest Duggar girls — Jana, Jill, Jessa, and Jinger (ages 24, 22, 21, 20) — have written a book about relationships: "Growing Up Duggar: It's All About Relationships," Predictably, people are fascinated by the idea of dating advice from four 20-somethings who have never been kissed, and never really dated. My initial xenophobic response was to pity their lack of experience, and thank my wicked and ungodly parents for for raising me to be the feisty heathen that I have become.

But with further consideration and a few minutes of research, it dawned on me: the Duggar women have this maddening sense of peace and self-assurance that I could not have imagined at 21, when I was mostly trying to avoid dying or leaving my dignity behind at bars.

While I’m grateful for the life I lead and the special variety of shenanigans that come along with premarital dating, I do think that the Duggar approach to life has its benefits. Maybe they don’t get to have the pleasure of having multiple social media accounts or seeing R-rated movies, but I’m pretty jealous that they don’t have to deal with the following crap:

1. They will never know the discomfort of the walk of shame.

The Duggar girls will never crawl into McDonalds at 7 a.m. on a Sunday morning with eyeliner on their cheeks and their heels in their hands. They will never order a breakfast sandwich from a perky middle-aged woman while wearing big sunglasses and a band t-shirt over a miniskirt. They will never take their to-go breakfast on public transport and realize mid-sandwich that they smell like Axe Deodorant for Men.

Next time that’s you, remember: this would never happen to a Duggar. (Though, if you think the term "walk of shame" should be changed to "walk of awesome," then perhaps the Duggars are actually missing out...)

2.) They will never have to negotiate awkward dating etiquette.

I can’t imagine what the Duggar girls talk to their friends about, what with no career or relationship hijinks to speak of. As much as I value my freedom to date whomever I want, I envy their naivety about the absolute nightmarish shitstorm that modern dating can be. The amount of time I’ve spent with friends, with multiple advanced degrees between us, analyzing the social media behavior of people we are dating is an abomination.

The Duggar girls rely heavily on their parents’ guidance and chaperoning during the courtship process. There is no physical contact at all until their wedding days. Before I get married, I will have spent many hours seriously contemplating dumb dating rules, like how often do I text? Should we be in a relationship on Facebook? Are we monogamous? How long do we have to be together before I can stop shaving?

They discuss plans, get to know each other on a basic first-date level, then get married. Think of the energy you’d have to do other things! You know how you set a New Year’s resolution to scrapbook more and then mid-January shove all of your supplies in a drawer because who has that kind of time?!

3.) They will never have to decide whether they have to do crazy stuff in order to be cool.

In chapter one, Jill talks about the pressure that she feels to conform. She relays a story about a time that she and her younger sister, with whom she shares a bed, were getting ready to go to sleep. Jill put her retainer in her mouth and her then five year-old younger sister Johannah, wanting to be as hip as Jill, asked to put it in her own mouth. Of this interaction she writes: “Thinking about that conversation later reminded me that we can’t conform ourselves to other people’s molds. But we try sometimes, don’t we? It’s inevitable that human beings, particularly teenagers and especially teenage girls, go through times when they may try to remake themselves into something, or someone, they’re not.”

THAT is the anecdote that Jill shared to illustrate the point that all teenage girls feel pressure to conform. I wish that my aha! moment around nonconformity was about orthodontia.

4.) They will never cut all of their hair off on a stupid whim.

The Duggar women have incredible, shiny, lustrous locks. Thanks to Corinthians, they will never make the mistake of pulling a Britney.

5.) They will never have to experiment with birth control.

Don’t get me wrong, I almost literally bow at the altar of Margaret Sanger (queen inventor of hormonal birth control). The autonomy that we are afforded as a result of readily available birth control is tantamount to nothing. As much as fallen politician Todd Akin would like it to be so, women cannot simply wish away an unwanted pregnancy. Until we figure that out I will continue to feel jealous of the Duggar women’s faith that any sex resulting in a pregnancy is a gift from above. There is nothing fun about three months of deciding whether the hormones that make you cry at every dog food commercial will find some equilibrium soon.