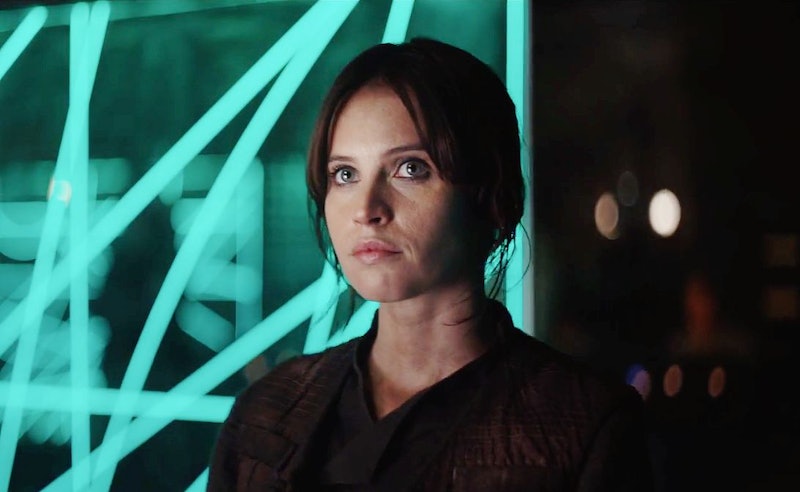 Rogue One: A Star Wars Story shook fans all over the world when it opened on Dec. 16. Now that the dust is settling, it's a good time to take stock of the new information provided by this pre-original trilogy movie. Since the end of Rogue One immediately precedes A New Hope, this new film prefaces and illuminates that 1977 episode. With Rogue One's release, the Star Wars cinematic universe becomes even wider and more layered. And any new installment is going to prompt fans to look for connections wherever they might be, even as they might pertain to the trilogy that began with The Force Awakens. One big point of speculation has to do with The Force Awakens heroine Rey and who her parents might be. Rogue One shut down one popular theory, but is there a chance that Rey and Jyn Erso could still be related? Spoilers ahead!

Some fans predicted that Rogue One rebel Jyn Erso (Felicity Jones) would be revealed to be the mother or the grandmother of Rey (Daisy Ridley). That theory bit the dust at the end of Rogue One. Jyn Erso and Captain Cassian Andor died holding each other on a beach on Scarif after they successfully transmitted the plans of the Death Star (including the crucial secret flaw built into the battle station by Jyn's father) to the Rebel Alliance. Unless Jyn had a child hidden away somewhere — and that's both unlikely and way out of character — her sacrifice means that she never became a mother. Rey is not a direct descendant of Jyn, though they have a great deal of selflessness and courage in common.

Of course, giving birth to someone is not the only way to be related to them by blood. It's possible that Rey is connected to Jyn in some other way. Jyn is the only child of Galen and Lyra Erso, so that leaves out her being Rey's aunt or great-aunt. But it could be that Galen or Lyra have a sibling who may be introduced at a later date and could be the family who left Rey alone on Jakku. For now, the only Ersos in the canon are Jyn and her parents. So the possible lines connecting Rey to Jyn are very few.

As the story stands, it's not completely out of the realm of possibility for Jyn and Rey to share a bloodline. But one of the actors involved is tiring of all the Internet conspiracy theories. In a comedic PSA for MTV, Felicity Jones pokes fun at fans who get her and Daisy Ridley confused. "I know we both have dark hair and talk funny to you Americans and I know we're both in Star Wars but yes, remarkably, two young British women can exist in the same cinematic galaxy," the actor says. She goes on to toss a wrench in the online fun of people determined to prove some kind of family tie between their two characters: "Also before I see another Reddit thread...Rey and Jyn? Not related."

It's a valiant effort. But even word from Jyn Erso herself isn't likely to halt the chatter about the Rogue One leader and Rey.