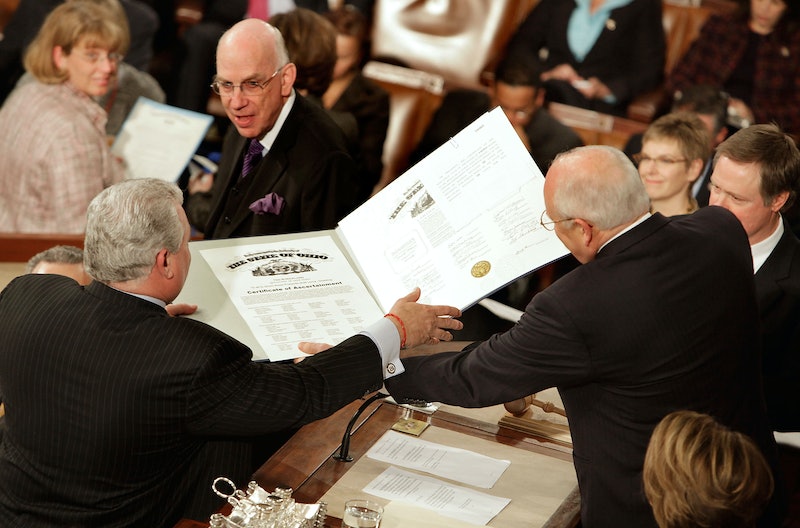 With the impending arrival of the Electoral College vote on Dec. 19, many are awaiting the moment when the nation will know the number of electors that voted faithlessly. As faithless electors could possibly change the outcome of the election, knowing how many chose to not vote for their pledged candidate is essential to knowing whether or not Donald Trump will win the presidency. While Electoral College votes, as well of the number of faithless electors, will not officially be counted and announced until a joint session of Congress on Jan. 6, 2017, it's possible you might find out the unofficial number of faithless electors as early as Dec. 19.

If you're hoping for an electoral college miracle, you can surmise that you'll likely know the number of faithless electors on Electoral College voting day based on historical precedent. For example, in 2012, the Associated Press announced the results of the Electoral College vote on the evening of voting day (Dec. 17, 2012), unofficially declaring the presidency for Barack Obama. This means that, generally speaking, the press and public have access to Electoral College meetings and results around the country; therefore, tallying the votes and counting the number of faithless electors among them should be a straightforward process. Any deviation from 306 votes for Donald Trump will mean that some electors have voted faithlessly.

Video footage of past presidential electors meetings on C-SPAN also suggests the nation could know the number of faithless electors on Dec. 19. For example, a clip from Ohio's 2012 meeting of presidential electors includes an announcement of the official tally of the state's electoral votes for president and vice president, as well as a signing of the certificates of vote, which are the official state electoral voting records sent to Congress. The recording demonstrates that electoral votes appear to be verbally announced following the casting of electoral ballots, making the results readily accessible. Indeed, many states' meetings of electors appear to be open to the public, meaning that citizens and the press should be able to attain the information firsthand.

Finally, even if for some unlikely reason the results from every state's meetings of electors are not immediately available on Dec. 19, they will certainly be available by Dec. 28, which is the deadline by which states must submit their certificates of vote to the Office of the Federal Register. As these certificates are received, they are posted online, and the Electoral College voting results from each state, including the number of faithless electors, can be readily observed.

Overall, while it is highly likely that we will know the number of faithless electors on Dec. 19, it is nonetheless important to remember that votes are not official until they are announced and confirmed by a joint session of Congress on Jan. 6, 2017. Indeed, Congress does have the power to contest electoral votes during this joint session, so the election is not over and the votes are certainly not final until Congress declares the voting process complete.

More like this
Michigan’s Governor Is “Going To Fight Like Hell” To Protect Abortion Access
By Andrea Zelinski
How To Fight For Reproductive Rights, Based On How Much Time You Have
By Courtney Young
LGBT+ Men Fleeing Afghanistan Were Denied Asylum By The Home Office, New Findings Show
By Sam Ramsden
The Meaning Of Angel Number 555, According To Numerologists
By Kristine Fellizar
Get Even More From Bustle — Sign Up For The Newsletter