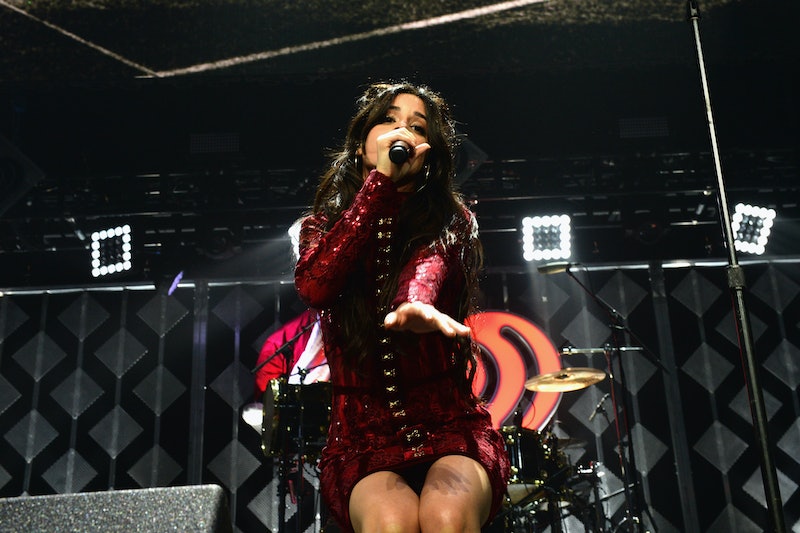 At exactly midnight on Dec. 19, Fifth Harmony announced via tweet that Camila Cabello has left the girl band after having reportedly confirmed with her representatives. Cabello has yet to comment on the announcement or explain why she made the unexpected decision to leave the band she's been with for over four years. And though her silence on the matter is driving Twitter crazy, she shouldn't have to justify the decision to pursue a different route. Her former bandmates Ally Brooke, Normani Kordei, Dinah Jane, and Lauren Juaregui wrote that they "wish her well," and her fans should do the same. Update: On Monday afternoon, Cabello released a statement, saying that she is indeed going solo, but that contrary to what they said in the tweet, her former bandmates were aware of her intentions to leave.

Earlier: Whether or not the group's name will switch from Fifth Harmony to Fourth Harmony has yet to be determined, but the now-quartet has confirmed that its remaining four members will be sticking together. Maintaining a hopeful tone, they wrote on Twitter:

"We are four strong, committed women who will continue with Fifth Harmony as well as our solo endeavors. We are excited for our future, and we can't wait for what the new year brings. Harmonizers, we are in this together. We love you with all of our hearts."

Right now, the only thing that can be confirmed in regards to Cabello's exit is that for fans of both Cabello and Fifth Harmony, the switch-up appeared to have happened suddenly.

The group's second album titled 7/27 was released in May 2016 and a third was reportedly in the making. And less than two weeks back on Dec. 9 during the iHeart Radio Jingle Ball tour's stop at Madison Square Garden, Jane reassured audiences the group's third album would be "lit."

The reasoning behind Cabello's decision aside, one thing is almost certain: her career in the music industry will surely continue, judging by her successful solo projects with singer-songwriter Shawn Mendes and rapper Machine Gun Kelly. Fans will just have to wait and see if she comes out with more of these projects in the future.