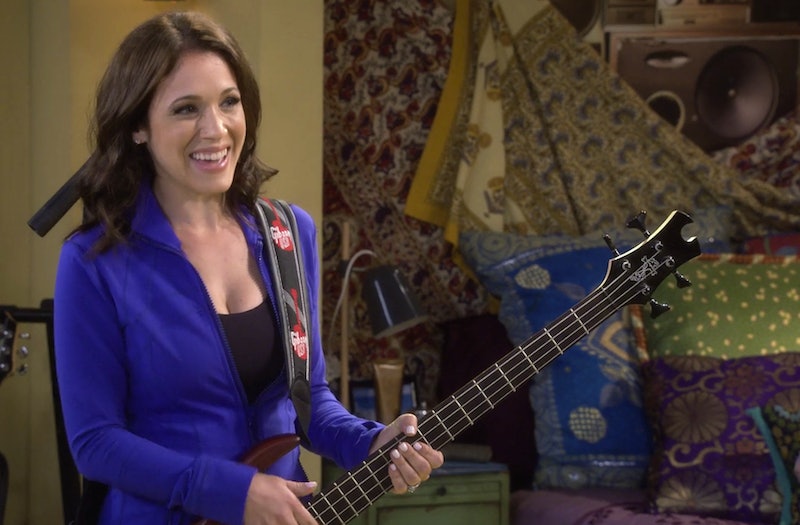 When Kimmy mentioned reuniting her old band Girl Talk on Fuller House Season 2, Stephanie knew she had to bring back the band's bass player Gia. Except, D.J. was less than pleased to hear that Gia would be returning on Fuller House. That's because older sister D.J. remembered what a bad influence Gia had been on her younger sister Stephanie. Stephanie promised that Gia had changed her ways since they were Facebook friends now and according to social media, Gia was a soccer mom who walked for nine (nine!) different charities. Yet, once Gia came back to the Tanner household, she proved that she hadn't changed all that much since her Full House days. Yes, Gia still smokes, if that's what you were wondering.

While the old friends Gia and Stephanie got along, Gia immediately went into passive aggressive mean girl (mean mom?) mode with D.J. by telling her that she used to think she was such a "dweeb." So you couldn't blame D.J. for telling Gia that she couldn't stand her back then. Even though D.J. wasn't in the original band, this Girl Talk reunion appeared to be doomed from the start.

The women of Girl Talk did successfully play the only song they know — Ace of Base's "The Sign" — toward the end of the episode. However, their success didn't last long once Gia said she needed a cigarette after Kimmy showcased the band's shirts. Gia told D.J. not to have a cow over her smoking, so not only had Gia's attitude and habits not changed since the '90s, neither had her vocabulary.

What had changed was what Gia was smoking. Instead of cigarettes in the girls' bathroom, she was rocking a pink (banana flavored!) vape pen. (This was not the first vape joke of Fuller House Season 2 either.) Even though D.J. had to admit it smelled good, she wouldn't let Gia smoke in her house. Once Gia tried to peer-pressure Stephanie with the fact that all of the soccer moms were vaping so Stephanie should too, D.J. freaked out that having Gia over was like junior high all over again.

Stephanie disbanded the band since D.J. and Gia couldn't get along and that was the end of the return of Gia. While I wouldn't have hated some more character development for Gia in Fuller House rather than her being exactly the same as she was in junior high, I guess I shouldn't have expected anything different from the resident '90s bad girl.