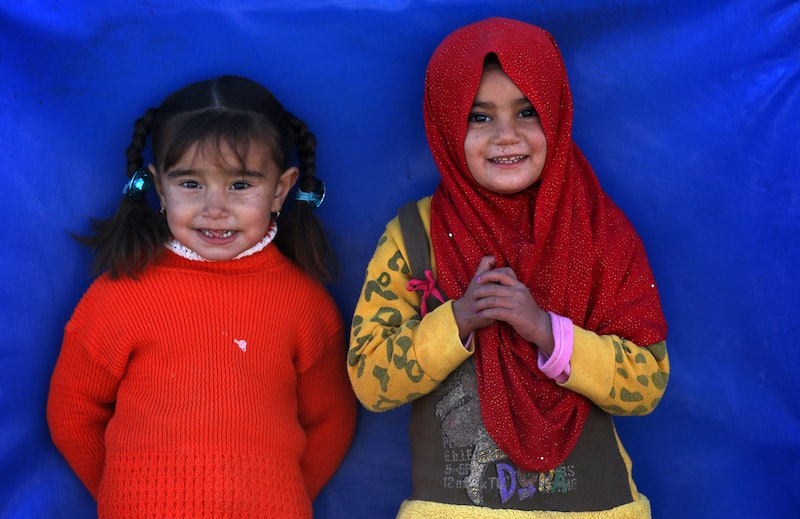 Having a daughter? Thinking of having kids one day and hoping for a girl? It can be a terrifying thing to think of bringing a girl into this world. Even though there have been huge steps forward for gender equality, 2016 has really exemplified the fact that it's hard out there for a b*tch, what with a deeply-qualified woman losing an election to the least-qualified candidate ever, the existence of the Brock Turner judgement, the truly preposterously sexist coverage of Olympic athletes from mainstream media, and countless other charming examples of misogynist, nonsensical rape culture (and that's just in the U.S.). What can we teach our daughters about feminism that can raise them as strong advocates for themselves and their rights as women?

I was one of the beneficiaries of a legacy of strong, highly feminist women. (Though in my family it actually became a bit toxic: my mother, legendarily, once told me that "if you're not achieving things, you may as well be dead." But the salient issue of female equality was never questioned.) However, there are certain things I wish I'd been told about growing up and existing as a feminist in the world: about how gender roles shape us even as small girls, about how the phrase "you can do anything" sometimes isn't enough to sustain faith in ourselves in atmospheres of sexist obstacles and abuse, about how much worse it is for women of color.

The simple stuff ("women are just as good at stuff as men," "you can do whatever you want with your life") is an excellent start for raising a feminist girl, but there are other things you may want to bring in at certain points to give them a bit more perspective. Also, let them like pink if they want to like pink; just don't let any relatives insist that they have to.

That Feminism Is Not Just About White Women

Too often, the curriculums in school about feminism focus unilaterally on white activists, particularly those involved with the suffrage fight: Emmeline Pankhurst, Susan B. Anthony, Elizabeth Cady Stanton, and other luminaries. The efforts of women of color in particular have tended to be eclipsed and excluded, from Ida B. Wells to Shirley Chisholm. If you want to really teach your daughters (and your sons) about being a feminist, go deep and wide: show them that it's not just a Western idea, and that women from all cultures have been battling against male oppression for a very long time, even if they wouldn't use the word "feminist" to describe themselves. Also make the struggles and successes of girls worldwide part of their experience; from Malala Yousafzai to international pen pals, a bit of international girlhood is always a good idea.

What we teach our daughters about feminism, its history, and its future also needs to be intersectional: it needs to recognize that sexism and gender roles exist in a framework alongside other repressive structures, like racism and ableism, and for women who exist in multiple "categories" the experience of prejudice shouldn't be separated out into separate forces of discrimination. The nature of oppression as intersectional is evident everywhere, as in the wage gap: white women earn less than white men, but Native American, African-American, and Latina women earn even less than them.

#FeminismSoWhite is a thing, and it really shouldn't be. Ignoring the "double whammy" of being a woman and a person of color (and being part of other discriminated groups, like being LGBT or disabled) is a massive disservice to the future of feminism. Always pay attention to the experiences of other women, our daughters need to be told; do not assume that yours is definitive.

That Feminism Can Start Young

Think they're too small to need to know about what might happen in the world as they get older? Think again. Gender roles are absorbed incredibly early; a prominent study in 1997 found that children first absorb them "in the home," from their parents, and then have them "reinforced by the child's peers, school experience, and television viewing." And a 2015 review of sociology research called Gender Roles found that children are educated about "gender appropriate" behavior from an incredibly young age, through toys, punishment, emotional attachment, encouragement to do different activities, household emphasis on school subjects, division of household chores and other aspects. Crucially, children tend to adopt their parents' attitudes unquestioningly, because that's what kids do.

You may have thought about giving your children gender-neutral toys or letting everybody play with Barbies or pink clothes or diggers regardless of their gender; but what other messages are they getting from the world? How should they view the idea that most toys marketed towards girls are dolls and nurturing things, while boys are allowed robots and scientific chemistry sets and discouraged from engaging with flowers? (This is unfair on everybody, by the way.) Show them the video above, and ask them what they think of it. Daughters should be encouraged to pursue and question whatever they like at a young age, and to speak up if they think something is unfair or ridiculous to them because they're a girl. (No, bedtime does not count.)

That Women In Power Matter

Role models matter. One of my greatest inspirations as a kid was Marie Curie, whose biography I won in a school academic competition; despite not being particularly scientifically oriented, I loved the idea of a woman (a woman!) making phenomenal discoveries in a shed, fighting discrimination, and winning not one but two Nobel Prizes into the bargain. Our daughters need to understand that it's not about symbolic victories; there's real value and power in seeing women be Ghostbusters and Prime Ministers and gold medal winners and prize-winning scientists, because it embodies what is possible.

Turn the television on to women making speeches, fill the house with women's writing, and above all, make it clear how hard women had to fight to get to where they are.

That Women Can Also Be Sexist

The notion that women are held back by men who believe them incapable is true, but it ignores another aspect that feminism sometimes don't quite talk about properly: gender roles are deeply embedded in our culture, to the point where women will punish other women for violating them. A review of the available science in 2012 found that, in many areas, women demonstrate just as much systemic bias against other women as men do; everybody is more likely to hire men for jobs than women, for instance. And that doesn't even take race and other factors into account.

Why do we need to tell our daughters this? Because "men are the enemy" is not feminism. What we, and they, are fighting against are structures of discrimination embedded deep in the culture, sometimes so deeply that they're not even visible. Don't teach them to view men as suspicious and inherently problematic; teach them to look at the world and recognize beliefs, wherever they come from, that put women in a box and don't let them out.

That Having Choice Is Power

It's not just "you can be head of NASA!" that really exemplifies feminism, though that would be pretty badass (and we're getting there slowly, with half of the 2016 astronaut intake being female for the first time in history). It's the potential to choose outcomes and have them weighed and respected as equal; and the real kicker comes when women's choices are inherently less supported than men's. A good example of this is in the childcare imbalance; studies have found that women in the U.S. and Europe still spend twice the amount of time as men on tasks related to caring for kids, an imbalance that affects employment prospects after motherhood, wage equity, expectations of career advancement, overall emotional health, and other issues. Forty-three percent of women with children leave the workplace for a period and many, if not most, find their re-entry more difficult than a returning space satellite.

Let's elaborate on "you can do anything:" try "you can do anything, and the obstacles that are pitted against you in your quest to do that, just because you're a woman, are unfair and need to go." The world is still an aggravating and unjust place for women, even if parts of it are becoming increasingly welcoming and delightful. Feminist daughters need to know that it's not them, and that fighting for greater opportunities and a fairer share has achieved great things; they're part of a phenomenal legacy. Sometimes it will be tiring, sometimes people won't listen, and they'll be very lucky if they get through life without some big gender-based knock backs; but they're part of a big community.

Perhaps that's the biggest lesson of all: feminists young and old are not alone.