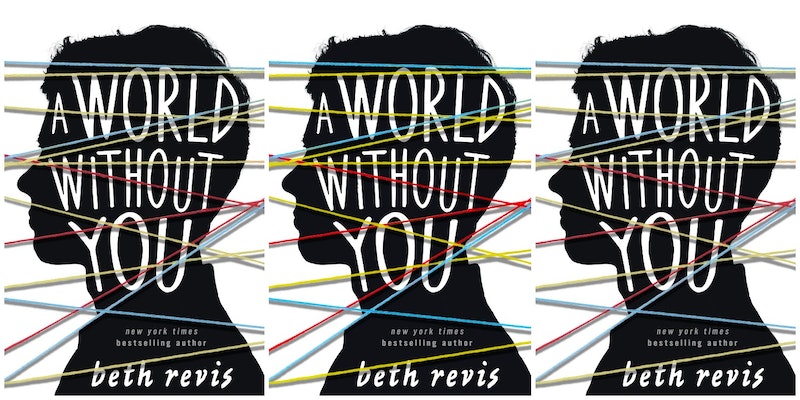 I’ve been raging against societal stigmas about mental illness since I was a sophomore in college and I wrote an editorial titled, "They’re People, Not Punch Lines." (Yes, I came up with that myself. Yes, I am immeasurably proud of it. No, I have no shame.) I was angry because people kept making self-harm jokes, and I've stayed angry for the last four years. I'm angry about friends thinking it’s OK to abandon a loved one during depression, angry about people joking about anxiety, angry about misunderstandings surrounding OCD, angry about every little thing that makes it less acceptable to be mentally ill rather than physically ill.

So when I read A World Without You by Beth Revis, a book about a mentally ill teenager, I was sure I would immediately understand and relate to the protagonist, Bo. I mean, I have a mental illness. He has a mental illness. We’re basically two peas in a pod, right?

Well, turns out that I have my own stigmas against mental illness. What’s that, you ask? Someone with a mental illness can be prejudiced against others with mental illness? I wouldn’t have thought so, but… well, let me tell you the story, and you can judge for yourself.

A World Without You is YA science fiction writer Beth Revis’ first foray into the world of contemporary fiction. The story follows Bo, a 17-year-old boy who believes he can travel through time. He attends Berkshire Academy — a school for troubled teens —with his girlfriend Sofia, who suffers from severe depression, and his sort-of nemesis Ryan, a narcissist with real anger issues. Bo believes Sofia, Ryan, and his other classmates also have superpowers — invisibility in Sofia’s case; telekinesis in Ryan’s.

Bo and Sofia fall in love at Berkshire Academy. But their love just isn't enough to save Sofia, who commits suicide before the book begins. Her death sends Bo into a prolonged, all-consuming delusion — one in which he believes he accidentally transported Sofia back in time and left her in a cabin near Salem during the Salem Witch Trials.

The book progresses in a series of what I call "Bo’s shenanigans and hijinks." Throughout the novel, he visualizes his "timestream" — a series of threads that allow him to time travel. In his delusions, he uses the timestream to travel to the past and save Sofia. In the process, he dismisses reality in pursuit of his own version of it.

As I read, I became more and more annoyed with Bo’s ability to cling so strongly to his delusions. Any time reality poked in, his mind created a new fantasy to prove his own point of view. As each piece of reality became more irrefutable and damning in its realness, his delusions seemed to break. I breathed a sigh of relief. And then... his mind could construct a newer, more far-fetched explanation to protect Bo’s version of truth.

I say "his mind created" the fantasies, not “he created,” because there is a difference. See, the thing about mental illness is that it turns the mind into a beast separate from the self. When I’m in the midst of the depression, it’s not me who’s telling myself I’m worthless or that I should die; it’s my estranged, monster-brain. Bo isn't actively trying to be annoying or hard to reach. He’s sick, and his brain is spiraling out of control.

Now, after finishing the book, I realize that Bo's potent delusions were a coping mechanism. But while reading the book, I found myself wanting to throttle Bo, to shake him violently by the shoulders, to punch him in the face — anything to "knock some sense" into him.

It’s ironic, because I was so horrified by the way his family treats Bo in the book, but at the same time, I was equally annoyed and unable to understand him.

Then, at the climax of the book (where things get intense), I began to sympathize with Bo. And I began to realize my own innate prejudice.

All this time, I’ve been angry at people without mental illness who don’t understand what it's like to live with it. I’ve had friends who have abandoned me in my darkest hours. I hated them for hurting me, and pitied them for not being able to comprehend that a mental illness isn’t just someone being stubborn or lazy or any of the pejorative words that get thrown around.

But here I was, rolling my eyes at Bo and calling him stubborn for sticking to his delusions.

And it hit me — stigmas against mental illness are so ingrained in us that even I, who have been depressed for maybe half my life and have actively and vocally sought to bust those stigmas by being open about my struggles, couldn’t wrap my mind around a mental illness different from my own.

See, the character I related to the most was Sofia. I got her on a deep level. I totally understood her, because I am like her. But Bo? Bo is different. I couldn’t understand him.

A World Without You is an important book because it so subtly and powerfully shows us that it’s hard for anyone to comprehend someone if they’re a little different. The book is about mental illness, but the lessons it imparts can be applied to anything — different nationality, ethnicity, religion. Even the most tolerant and understanding people, in the end, can be biased. It’s a powerful book, because it doesn’t show us this by telling us that we’re prejudiced. My worldview has been altered by this book, my eyes opened wider, a bit of intentional societal blindness cured, because of the way this book made me feel.

It made me feel annoyed, frustrated, superior — and then it made me recognize that these feelings were wrong. Now, hopefully, I can apply what I learned from this book to real life.