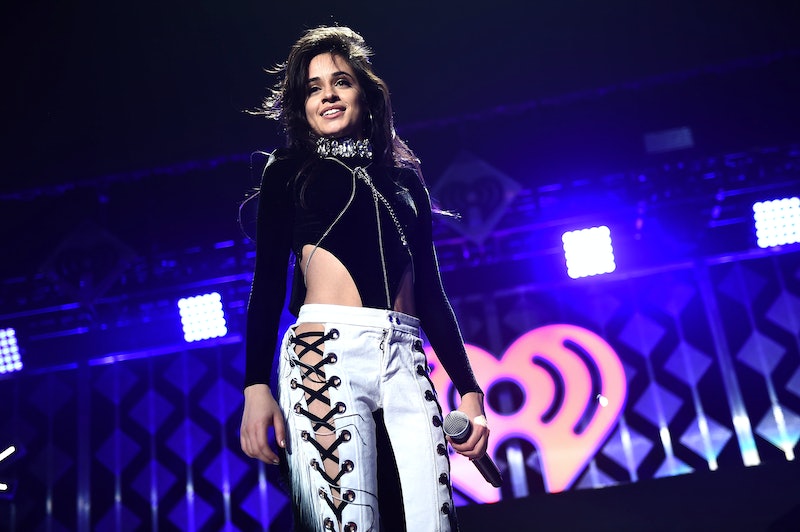 Late Sunday night/early Monday morning, the news broke that Camila Cabello has left Fifth Harmony after four and a half years with the band. Given the group’s major success this year, many were taken aback by the announcement, but it’s actually not entirely surprising. Camila Cabello’s X Factor audition shows she’s always had solo aspirations. Update: On Monday afternoon, Cabello released a statement, saying that she is indeed going solo, but that, contrary to what they said in the original tweet, her former bandmates were aware of her intentions to leave and they had had "long, much needed conversations about the future" that led to this point. "I'm excited and full of joy because I know, no matter what happens, I am following my heart," she closed the statement. "I hope to see you on my journey."

Earlier: Similar to One Direction, the members of Fifth Harmony originally went out for the reality competition as individual contestants. For her 2012 audition, a then-15-year-old Cabello chose “Respect,” a 1967 single popularized by Aretha Franklin, and let's just say she slayed it. She failed to make it through to the judges’ houses stage on her own, but was later paired with Ally Brooke, Normani Kordei, Dinah Jane, and Lauren Jauregui by judges Simon Cowell and Demi Lovato. Together, they finished in third on X-Factor, but rose to prominence outside of the show, most recently topping charts with the Ty Dolla $ign-aided “Work From Home.”

As Fifth Harmony progressed, Cabello continued to put out solo music on the side. She released “I Know What You Did Last Summer” with Shawn Mendes in 2015, and more recently teamed with Machine Gun Kelly for October’s “Bad Things.” When rumors swirled that the outside work hinted at a potential split up, Cabello initially fired back at critics.

“Actually I've never missed a 5h recording session or any 5h commitment ever, I was at the studio yesterday too,” she wrote in a string of tweets last December. “I understand nobody's telling you the real and all you have left to do is assume. but all of these assumptions are false… I sleep less and during the times I used to have free time I work, but I put in the same amount of work for 5h that I always have.”

Cabello has yet to comment on her exit from Fifth Harmony, so it’s unclear what’s changed in the time since. Bustle has reached out to her publicist for comment, but has yet to receive a response. She hasn't even confirmed she'll embark on a solo career, so she could very well be taking a break from music altogether. Whatever the case, it’s not worth speculating over. Her decision is her own.