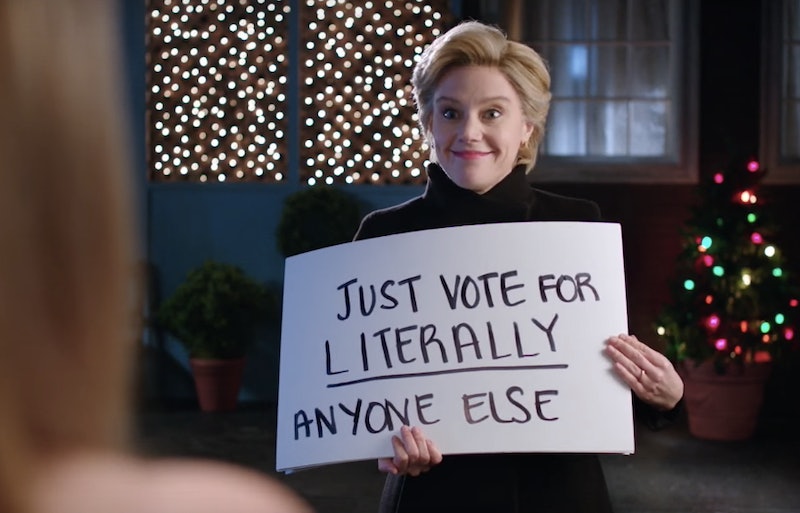 The Electoral College will cast their votes and officially put an end to the 2016 election today. For over a month now, those of us who wanted a Hillary Clinton presidency have been pinning our last hopes on these electors rejecting Donald Trump. A sketch in latest episode of Saturday Night Live featured Clinton imploring an elector to not vote for Trump, and it perfectly captured how more than half of America must have been feeling Monday.

Titled "Hillary Actually," the bit parodies the Love Actually scene in which Mark confesses his love to Julia with the help of 13 cue cards; Kate McKinnon's Clinton had probably three times as many as that before the elector she confronts tells her to hurry up as she starts recounting the story of her long career, giving Clinton no choice but to get rid of a bunch.

The arguments she uses to make her case are the same ones millions have been making over the past few weeks: Trump's many conflicts of interest, his lack of discipline and knowledge when dealing with foreign affairs, his bigoted cabinet picks, and most importantly, the fact that he's "cray." Clinton goes on to encourage the elector to vote for "literally anyone else," even if it's not her. Some of the suggestions she gives are John Kasich, Tom Hanks, Zendaya, The Rock, and a rock.

There were only seven electors who voted against the candidate they were meant to support, and most of them were Democrats. Although it may seem counter-productive, some "Hamilton Electors" were willing to vote against Clinton in an effort to convince at least 37 Republican electors to follow their lead and throw their ballots behind someone else. If this had happened, Trump's electoral count would have dipped below 270 and the election would have been sent to the House of Representatives. In this scenario (where each state gets one vote), Trump would have gone in with 29 Republican voters, meaning only four of them would have had to been persuaded to vote against him to make Clinton victorious.

Perhaps that's why McKinnon's Clinton was so willing to pay for the $1,000 fine the elector would have to face for being faithless.

With Trump estimated to be the most disliked candidate in history to ever win a presidential election, this sketch hit real close to home for millions of people in America on Monday.