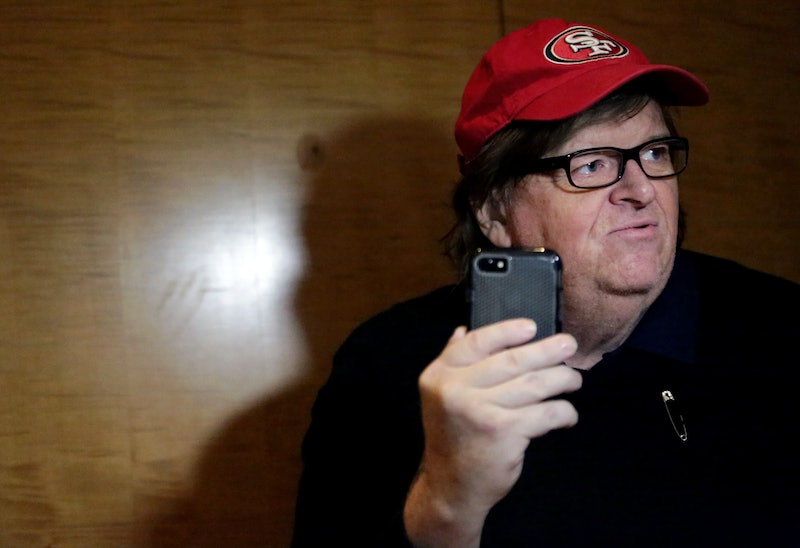 Of all the analyses put forward before the election, it was Michael Moore's non-scientific case that hit the head on the nail and predicted Donald Trump's Electoral College win. It wasn't the polls he quoted that came true, but rather his "Midwest Math" or "Rust Belt Brexit" theory, which argued that states like Michigan, Ohio, Pennsylvania, and Wisconsin would go for Trump. He spelled out the reasons it would happen, like white men feeling fragile and America wanting to "shake things up." And now that Moore's prediction came true, he's addressing the Electoral College.

Moore took to Facebook to beg and plead with the electors that they not vote for Trump on Monday. Moore mentioned that Hillary Clinton took home the majority of the popular vote — she leads by 2.8 million according to the latest counts — but that is not why he asked the electors to choose someone other than Trump. Moore made the argument that the stakes are much higher than listening to the will of the people: "I'm simply asking you to vote your conscience and PLEASE do not put our nation in danger by choosing Donald J. Trump."

Moore went on to reference the alleged Russian hack of the election (which Putin's people have firmly denied). He suggested that the investigation into the hacking should be finished before the Electoral College votes, and said that Trump's decision not to attend security briefings should give people pause. "Do we want a Commander-in-Chief who is too busy or too disinterested to protect us on a daily basis?" Moore asked. "How much more do you need before you get a sick feeling about all of this?"

He answered his own question:

I think you know something is wrong with this man. He just doesn't seem "right." One crazy comment or action after another. He may not be well. Don't you have a responsibility to protect us from someone who might be mentally unstable?

He went on to explain what the law says, arguing that electors have the duty to do what they feel is right. "One reason the founders set up the Electoral College was to make sure there was one final protection should someone who is a danger to the country slip through," he explained. Moore even offered to pay the fines of any elector who lives in a state where there is a fine (some 30 states plus D.C. have some sort of law to try to prevent faithless electors).

But his best point of the whole thing — at least for a Republican audience that he's addressing — is that they shouldn't vote for Trump because, as Moore alleges, he'll never make it to the full four years of his term:

You know how dangerous it is when any politician, Democrat or Republican, who's a super narcissist is elected to office, they start making decisions that personally benefit themselves — and before you know it, they're being hauled off to jail. Why not vote tomorrow for someone who's going to finish her/his term? Why risk the volatile presence of Donald Trump in the White House — and help to guarantee another generation of Dems in the Oval Office?!

That last bit doesn't sound so bad to those who would've liked to have seen a Clinton presidency. And he's right in pointing out that the best thing for the country would be to avoid a Trump presidency. Even if we were guaranteed a Democratic majority for years after, I would argue it's best not to go down that road in the first place. We've already an inkling of where it leads. However, according to Electoral College vote day reports, there most likely weren't enough faithless electors to thwart Trump's chances. Those votes, however, won't be officially counted or confirmed until Jan. 6.